If ever there were a franchise that sorely needed a reboot, it was STAR TREK, and I'm glad to see that in enacting the reboot the filmmakers chose to start over at the beginning, with the original crew of characters and a slightly altered timeline. That's all I'll divulge about the overall plot, but I enjoyed it very much and would rank STAR TREK right next to THE WRATH OF KHAN as the best in the series. I say that as a person who grew up on the old school cast and prefers The Original Series (or TOS if you prefer) over all subsequent TREK entries, so make of that what you will. I can't guarantee that it will please the inflexible purists out there whom I know (I'm betting cash that both Scooter and Peter the Red will find endless fault with it), but take it from me that this is in every way the correct way to handle a TREK relaunch. As for the particulars: 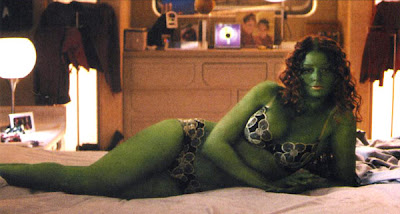 Rachel Nichols as the all-too-briefly-seen Gaila, proudly representing for green chicks throughout the galaxy.

Anyway, the bottom line is that it's fun, so TRUST YER BUNCHE and boldly haul your ass to STAR TREK this weekend. And if you don't feel like combating the opening-weekend hordes you'll miss nothing by waiting a few days; if you know old school TREK you know what this is all about, but it's a blast seeing the series get exactly the shot in the arm it's needed for well over a decade.
Posted by Bunche (pop culture ronin) at Thursday, May 07, 2009

Am I Peter the Red?

Never gave Star Trek a chance when I was young, but saw some of the movies and found them a bit hard to follow. But your review has intrigued me. I am gonna trust my bunche and see it. - Xtina

You haven't led me wrong yet, Bunche. I'll be there as soon as I can slip away from the wife and little girl.

Saw it last night - once again, largely because of your recommendation. And, like Kung Fu Panda and Tropic Thunder, I loved a film I had expected to suck. Some of the scenes were silly even by Star Trek standards (two words: ice planet), and the crew was too young and pretty by half; that aside, however, the movie rocked. It got damn near a standing ovation at the show we attended, and we plan to catch it again in Imax next week. Thanks for the heads-up, Bunche!

(This post's capcha: pronspa. If that's not a word, it should be, and damned if if it doesn't remind me of "prosper.")

Saw it in IMAX yesterday. I thought the beginning blew, way too Hollywood pat for my tastes, but it improved immeasurably from there despite the cast looking like "Star Trek 90210" (and Karl Urban, a/k/a McCoy, looked like everyone's dad). This is one of those movies that HAS to be seen on the big screen, TV's not gonna cut it.

Man alive... what a relief! I was convinced you were gonna go all purist on me and be determined to hate it!

I loved it, and in many ways its the Star Trek movie i've always dreamed of seeing.

My only gripe is we aren't gonna see the adventures of this crew on a weekly basis.