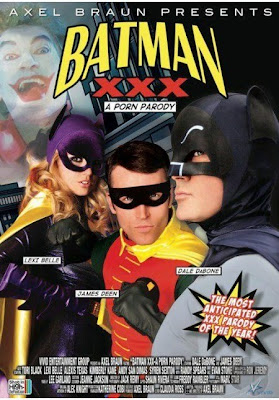 If there's one thing I never imagined I would see, it's the sight of the Riddler initiating an act of drooly "snowballing" and doing that famous lunatic giggle as he enthusiastically eats Bruce Wayne's fiancée's asshole.

But I'm getting ahead of myself.

Like many superhero geeks, the classic Adam West BATMAN teevee show from the 1960's was a favorite during my formative years and it very strongly instilled certain virtues in me at a young age that are still in place today. Hey, if Batman said it was a good idea to wear a seat belt, you had goddamned well better believe that the wee Bunche buckled up for safety! Adam West's Batman was my hero with a capital H and I admired everything about him, even if he was something of a monotone square. I watched the show religiously while it ran in syndication on New York's Channel 11, and I'll never forget the moment when, after not having seen it between the end of fourth grade and the start of junior high school, I twigged to the fact that the show was in fact a comedy, in fact the very definition of the term "camp," and with that understanding came a whole other level of enjoyment.

The plot, such as it is, involves the Riddler (Evan Stone, who played Captain Kirk in THIS AIN'T STAR TREK XXX ) kidnapping Bruce Wayne's fiancée, Kimberly Kane (Lisa Carson), so that he, the Joker (Randy Spears) and Catwoman (the very sexy Tori Black) can seal the fates of Batman (Dake DaBone) and Robin (James Deen) once and for all when the heroes speed to the rescue. As our heroes rush to save Kimberly, they find themselves in situations where they — Surprise! — fuck all and sundry. And it wouldn't be the 1960's BATMAN without Batgirl, and here she's portrayed with charm and verve by the adorable Lexi Belle. 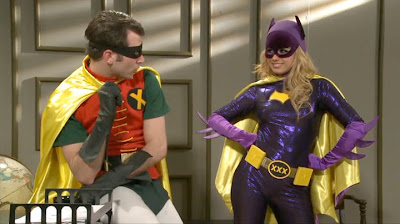 Robin (James Deen) and Batgirl (Lexi Belle).
There's even Molly, the Riddler's ill-fated moll who was played by Jill St. John in the original version and who was subjected to Batman's legendarily goofy "Batusi" dance moves, now incarnated by the foxy and enthusiastic Alexis Texas, and this time around Molly gets to live!

The finished product is good, wholesome dirty fun and I enjoyed it quite a bit, more for its tribute aspect than for its sexual content. A few notes: 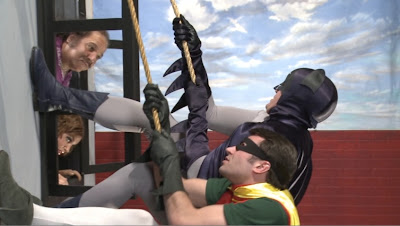 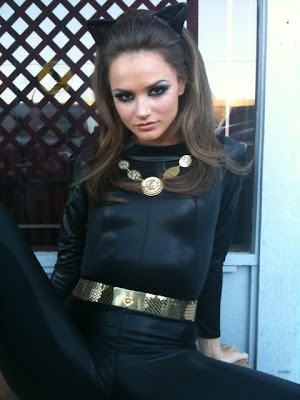 The sexy-as-all-fuck Tori Black as Catwoman. Mee-Yow!!!
My only real complaint regarding this sequence was that, once the action got started, Tori Black performed it without wearing a trace of the Catwoman outfit, not even the ears, and the ornate star tattoo on her belly took me completely out of the 1960's Batman aesthetic.The funny thing is that after watching the porn version, I was inspired to break out some episodes of the original series, and I find it quite interesting that Catwoman and Batgirl in the straight version are a thousand times more nuclear-hot than their admittedly cute tenderloin cinema counterparts. Then again, is it even possible to best Julie Newnar and Yvonne Craig in their prime for looks, smokin' thermonuclear bods and outright sexiness? I think not. In fact, Julie Newmar as Catwoman is the female who first made the five-year-old Bunche "stand at attention" and feel all tingly in a certain location south of my navel, a moment that confused the shit out of me, but felt quite nice at the same time.

I have to get a copy asap...before time warner rips them a new hole.

words cannot describe how eager I was to read this review

Yep, I'll seeing about getting this one too. Now that the production expanded to remake as many comic parodies as possible, I wonder if any of them will be this good.

Great review.....and yeah....i think Julie Newmar did that for a lot of us.....sexiest woman ever! and yeah....Tori Black taking all the her outfit off and the tattoo.....it made me outright sad.

Dude, any suggestions where to get it?

Get it from here:

I haven't gotten t3h pr0n in years, but this NEEDS to be in the collection!

However: major major merits for Kimberly Kane's costuming. The lass should dress like that all the time, at least when on camera.

I got my superhero and uniform fix at CosplayErotica, but this movie looks awesome too

Hey, Bunche love - I finally got to meet Tori Black and Lexi Belle at Exxxotica. :)
http://amberunmasked.com/?p=3447

Tori took off her mask because she bears a resemblance to Julie Newmar.