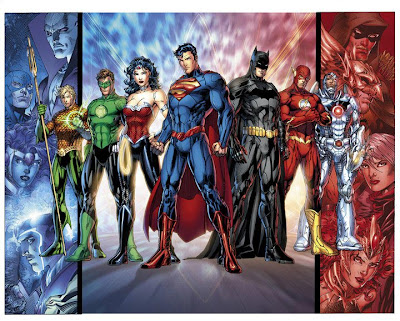 The dawning of "the New 52." My biggest question (of many): Why the fuck does Superman need armor?

As the comics geeks among you are no doubt aware, DC Comics has decided to do away with their extant titles and relaunch the DC Universe from Square One in an effort to win new readers, citing decades of continuity as a stumbling block that would make it difficult for new readers come in and enjoy any of the books. Well, DC has tried to clean up its admittedly-convoluted and dense continuity for nearly three decades, starting with CRISIS ON INFINITE EARTHS and continuing ad infinitum in imprint-wide crossover events ever since, and it still has not worked to their satisfaction. Now the solution is to hit the reset button and hope that works to lure new readers away from Guitar Hero and a myriad of other, far "cooler" distractions, and DC is doing hoping to do this with the launch of "the New 52," in other words they're starting over with fifty-two get-in-on-the-ground-floor first issues featuring redesigned versions of their classic heroes (designs mostly by Jim Lee, in what looks to me like a concerted effort to return the heroic aesthetic to that of 1991), and a number of peripheral books that look like a case of throwing whatever they can at the wall and hoping something sticks.

In my opinion — one informed by thirteen years on staff within the comic book industry industry majors (meaning Marvel and DC) — the whole thing reeks of an obvious corporate mandate since DC is now under the direct control of Time/Warner, and from all of the evidence that I've seen in the media and from what I've witnessed starting with Geoff Johns' announcement of "big things coming in 2011" at last year's NY Comicon, this venture seems very rushed and looks like very little actual thought went into it. As a lifelong DC fan, I found the initiative to pretty much be a massive "Thanks for all the years of your cash, so now you can fuck off" to their staunch readers, and I took that as more than just a tad offensive. I was riled-up enough to publicly state that I had zero interest in the reboot and that I would not buy any of the new material, but I'm ashamed to admit that curiosity overruled my irate geeky righteousness, and I decided to check out at least the first few books, just to see what was being done. I hit the comics shop yesterday yesterday morning — I refused to attend one of the city's comics shops' several "midnight madness" events for this relaunch — and obtained the first New 52 book, along with the book that supposedly closes the door on the DCU that came before, so...

MASSIVE SPOILER WARNING!!! If you want to go into this cold, stop reading this right now! (Plus, I'm writing this assuming you've read FLASHPOINT and its related tie-ins, so I'm going full-on with the geek knowledge, meaning that if you don't read this stuff, the following will probably make little sense to you.)

I read both FLASHPOINT #5 and JUSTICE LEAGUE #1, and here's how it breaks down: 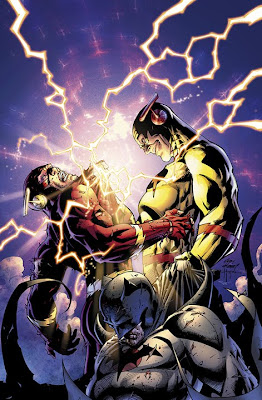 As I figured would be the case, the New 52 status quo springs directly from the unsatisfying conclusion of the FLASHPOINT event series (and its mostly horrendous ancillary books). It turns out that the real reason for the world being completely fucked in that alternate reality was due to Barry Allen preventing the murder of his mother. That changed everything and rendered the Reverse Flash somehow disconnected from any specific timeline or reality, somehow meaning that the Flash can do nothing to him, while the Reverse Flash can fuck Barry up six ways to Sunday. Anyway, Thomas Wayne kills the Reverse Flash and the Flash runs back in time to prevent himself from saving his mother, during which trip the Flash has a mysterious deus ex machina vision of some woman's head that says the timeline/reality is actually a three-way street (thus allowing for the convergence of the DC, Vertigo and Wildstorm universes). So when the Flash stops himself, time and reality reset so that they are ever so slightly off from the DCU that you and I know. We only know that anything is different when the Flash turns up in the Batcave and Batman has on his Lee-designed armor. He explains the whole thing to Batman, who asks him "But now everything's back to normal?" to which the Flash ominously answers "As far as I can tell." (The Flash has memories of the original DCU as well as those pertaining to the reality established during FLASHPOINT, which is an after-effect of everything being reset with him as the nexus of the whole event.) And from there we begin with the New 52... 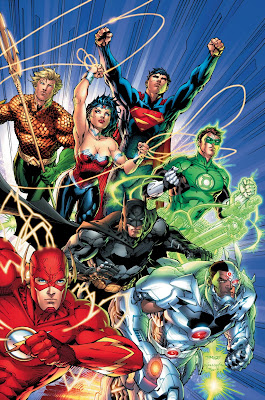 JUSTICE LEAGUE #1 is an utter non-event. In this story, it's five years before the new DCU's present day and the superheroes have not yet met one another, so the whole first issue is a so-so back and forth between the newly-met Batman and Hal Jordan, accented with Jim Lee's boring artwork. (I am soooooooooooooo fucking tired of his overrated and stiff rendering; everything and everyone looks brittle and about to shatter at any moment.) The two heroes find themselves chasing after some sort of creature from Apokolips (which is not mentioned by name, but the monster makes mention of Darkseid, which Hal thinks sounds like a band name. Yes, that actually happens in the dialogue), and in the last two pages they end up in Metropolis because GL's ring acts as a "detector of the extra-terrestrial," so it homes in on Superman. The last two pages consist of the overly-confident GL getting instantly trounced by Superman, who, in an utterly gravitas-and-interest-free final splash page, turns to Batman and asks "What can you do?" (I personally would like to see Batman whip out a Kryptonite buttplug and shove it straight up Superman's jacksey, but something tells me that ain't gonna happen.) Also the story (such as it is) is brought to a complete and grinding halt by shoehorning four pages of what's obviously the start of Cyborg's new origin, a move that contributes absolutely nothing to the issue whatsoever. So essentially the first issue of what's supposed to be the company's biggest and most high-profile team book amounts to some meant-to-be-amusing bickering between Batman and Hal, with a token appearance of Superman at its very end. The whole thing read like half of an issue and was in no way worth $3.99.I have no interest in reading the rest of this story until it's out in a collected edition, and If this is how DC is going to handle the re-launch, they can count me out as a repeat reader.

That said, in regard to JUSTICE LEAGUE, I have certainly read far worse comics. It was not the screaming train wreck I anticipated, so maybe there is hope for some of the upcoming titles. I will not be checking out all of them, but I'm curious to see what Gail Simone's going to do with BATGIRL, and I'm very curious to see if this new iteration of SWAMP THING will break the curse and be the first genuinely engaging run for that character since Alan Moore left writing the book over two decades ago. But those are both next week, so stayed tuned.

And from now on, if I mention it in future posts, FLASHPOINT will be henceforth referred to as "FLASH-THE-HASH-POINT." (For those of you not up on your "clever" slang, to "flash the hash" is to vomit.)

What I'd like to know is, who decided Jim Lee is a great costume designer? DC has GEORGE PEREZ exclusively, the man knows how to create snazzy-looking super hero uniforms (has anyone ever improved upon George's original Nightwing outfit?) and they DON'T have him do the redesigns? Superman's new costume is so bad, even George can't make it look good. And all the details and bulkiness in Batman's costume--how can operate with all that crap weighing him down?

That's just the tip of the iceberg in terms of my problems with this relaunch--but you already know that, Bunche.