Here are the most recent additions to my collection of autographed 8x10's, all of which were obtained by friends who were kind enough to mule and wait on line for me (in one case for hours) since I was too broke to attend the shows in question. I've had these for months but was only able to get them scanned today, thanks to the kind graces of a friend in Prospect Heights. (My own scanner gave up the ghost months ago.) 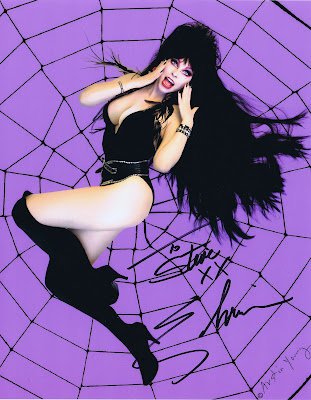 From what was reportedly her final East Coast appearance, the one and only Elvira. (special thanks to Barney Sheehan for this one, especially because he stood on line for something like three hours to get it) 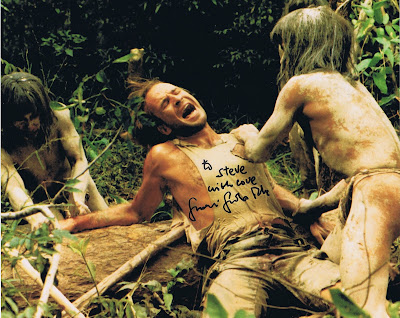 Giovanni Lombardo Radice, the infamous sadistic cokehead asshole from the timeless Italian cannibal classic MAKE THEM DIE SLOWLY (1981, aka CANNIBAL FEROX). His character tortures and kills some innocent South American Indians and ends up on the receiving end from their understandably pissed-off fellow tribesmen, who memorably cut off his Johnson and eat it right in front of him. The wound is later cauterized and he escapes from his captivity to wreak machine gun-wielding havoc like some sort of castrated Rambo before getting the top of his head hacked off with a machete and having his brains eaten by eager natives. A family favorite for kids of all ages! (special thanks to Barney Sheehan for obtaining this rarity) 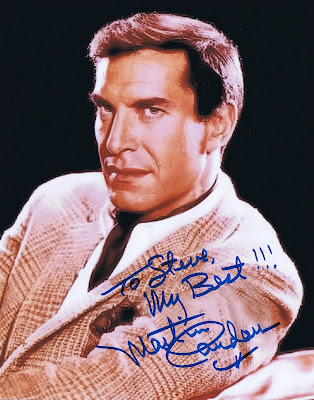 My man Martin Landau as the inimitable Rollin Hand from MISSION: IMPOSSIBLE. Of the many cool spies from 1960's TV, Rollin gets my vote as the coolest of all (with John Steed coming in at a close second). The part was an actor's showcase and the series just wasn't as good after he and wife Barbara Bain left. (the most special of thanks to my friend the Red Queen for snagging this for me; it's now one of the Holy Grails of my collection)
Posted by Bunche (pop culture ronin) at Tuesday, January 24, 2012

love the elvira ! i have 2 but that pose is from the sadly cancelled movie macabre.........oh and an fyi it's her last apperance as elvira. she will continue to be elvira but will appear as cassandra at shows.

Что нового? The collection of you the picture and sign of celebrity best I see! Now, need you a blog just for this! Thank, Bunche!