GEEKIN' OUT WITH THE CHOSEN

I just got back from a trip to Albany, where I gave a slideshow presentation and fun lecture on the geekish wonder of comics conventions and cosplay at Temple Israel, and I had a blast!

Invited up by my friend Bob Crystal — the older brother of my dear friend and fellow reprobate, Ruthie — I presented a lecture and slideshow of some 120 photos taken at the various cons I've attended over the past five years to the temple's periodic brunch gorp of nearly forty people, and it went over a treat. 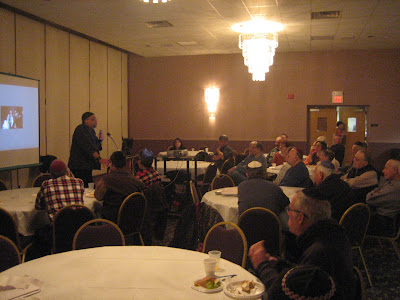 My philosophy on this kind of thing is that Rule #1 should be "Do NOT bore your audience," so I picked out shots that highlighted the imagination and creativity that that is celebrated on comics conventions, illustrating that point with loads of images of the often stunning costumes crafted and sported by attendees. The audience, most of whom were in their mid-fifties and up, clearly had fun and there was even a Q&A session where I answered questions about convention event logistics, whether or not the cosplayers got paid for their efforts, and a number of other queries that folks unfamiliar with the culture were likely to ask. 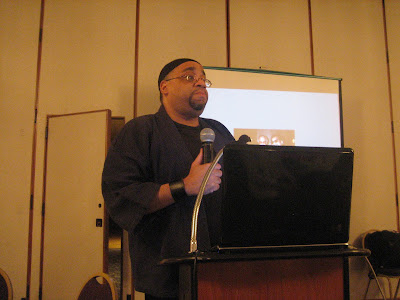 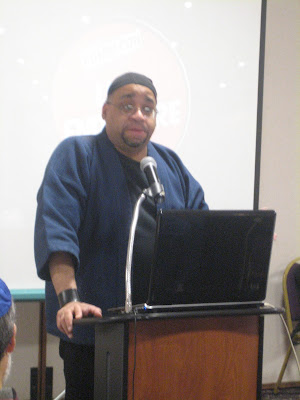 When it was all over I was greeted by several audience members, some of whom continued to eagerly ask questions and share their agonized stories of owning a veritable library of Golden Age classics that their mothers threw out or that they eventually outgrew, each tale making me visibly shudder. Upon noting my reaction to some of those tales, one venerable codger looked at me and said, with a heartbreakingly earnest look on his face, "I swear, I don't know what the hell I was thinking when I threw them out. I had ALL of the first appearances! Batman, Superman, Captain America, you name it, I had it, and now..." (CUE FUNERAL DIRGE)

Anyway, the whole thing was a hit and I had a terrific time. I hope to do more events like this in the foreseeable future! 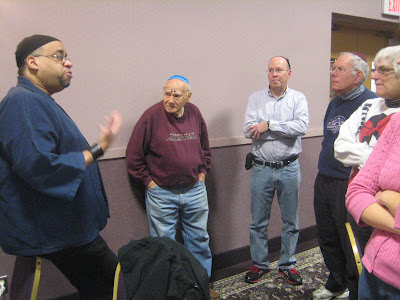 Yer Bunche, explaining to an attendee that cosplayers do not necessarily suffer mental disorders that make them believe they are the characters that they portray, nor is their desire to cosplay a drug-induced state of delusion. No, I'm not kidding.
Posted by Bunche (pop culture ronin) at Sunday, November 18, 2012

I would love to attend a talk like this--and not just to cruise orthodox 60 year-olds.