Yes, you read that right. A flyer for a MLK Day-related "Freedom 2 Twerk" event where folks can go to get their drink and hump on while decked out in all their rap music video-style hip-hop finery. There was a bit of media attention about this during the past week-plus, thanks to members of Dr. King's family expressing outrage at his image being inappropriately used in order to promote parties in "honor" of his nationally-celebrated holiday. A figure of considerable dignity, especially revered by American blacks who are old enough to remember what a shithole this country was for us highly rhythmic individuals before the Civil Rights Movement, Dr. King became the face of the struggle for equality in a land of the free that was anything but what it presented itself as, and his tragic death— no, let's call it what it was — his tragic assassination forever ensured him a place as black America's most iconic martyr. If you're black and around my age (48), you know exactly what I'm talking about, especially if you spent any time with your older relatives who likely had at least one framed portrait of Dr. King on their wall, or if you ever went to a church down South and cooled yourself while sweltering in a pew with one of those mass-produced hand-held fans bearing King's face. King's was, and still is, a face blacks of a certain age never wanted to forget, for reasons I cannot even begin to go into here with enough information and cultural/social/historical insight to get it all across to those who genuinely have no clue, so I suggest those among you who only understand MLK as "that black guy who made things okay for other black guys back in the Sixties" take some time to read up on him in-depth.

In the decades since his death, things have certainly improved for American blacks, and aspects of American culture have become so influenced by black input that it's taken for granted now. White kids today probably cannot conceive of a time when our nation's consciousness did not wield such a "just the way it is" melding of black ways and thinking in their everyday lives. In short, the so-called "great American melting pot" is becoming more so with each passing day. But along with that positive shift has come a rise in the glorification of ignorance and thuggery that sickens many of us who struggled to be taken seriously as human beings in communities where we were numbered among the handful of blacks who were not there as domestics. Over the past two decades especially, the exaggerated images and behavior seen in rap videos that rely more on their visual fantasy quality than any that may be found in their lyrics or beats has become seen as a lifestyle to be desired and emulated, perhaps completely missing the irony in such over-the-top macho and possession-oriented visual themes. "Ghetto fabulousness" and the old school pimpin' mentality are perceived as cool by those who don't know any better and that ain't going to change anytime soon. Sadly, Martin Luther King Jr.'s once-sacrosanct persona is now seen as being perfectly acceptable as an element for use in that pimpalicious aesthetic.

The art on these announcements tends to involve images of the venerated civil rights agitator's head Photoshopped onto bodies accessorized in gold chains, black t-shirts, and/or leather, surmounted with fancy cars, bottles of liquor, and scantily-clad women. Basically textbook rap video and album cover imagery, and if I may be completely honest here, I have to admit that the idea is so ridiculous that I laughed my ass off when I first saw examples of the flyer genre in question. It's like something out of National Lampoon during its intentionally over-the-top-offensive days, or the sketch from CHAPELLE'S SHOW that featured suave and wholesome 1950's-era crooner Nat King Cole engaging in pouring champagne over the body of a toothsome young thing while singing about "This is what you want on your vagina." It's funny because it's something that just should not be, yet there it is. However, I doubt that the makers of the MLK Day party flyers have such satire in mind. Maybe I'm wrong and I have unfairly misjudged the creators of this stuff, but when I weigh it against the behavioral slide exhibited by many in today's black community, it seems to me that these come from a place of ignorance rather than one of transgressional humorous intent. Anyway, from the many examples of such that I've seen over the past few days, here are my two favorites, both of which predate 2014. Both are utterly ridiculous, but the one from Endzone takes the prize for its grade school level of photo manipulation, especially the angle at which King's head is planted on the body. It looks like he has a defective neck after surviving a lynching. 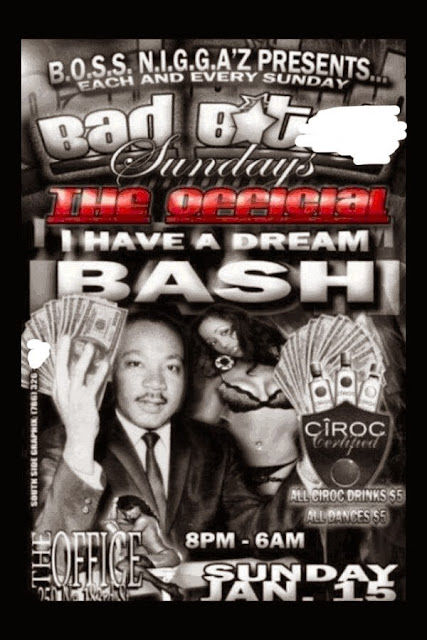