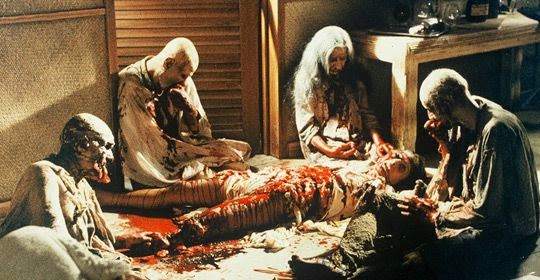 What is it about zombie movies that always makes me hungry?

Once again I have tried. I swear to god, I really tired, but after over three decades the appeal of the Italian-made ZOMBIE continues to completely elude me.

When George A. Romero's epochal DAWN OF THE DEAD (1978) made it over to Italian screens and blew audiences away with its unprecedented prefect fusion of intelligent script, completely believable acting, hardcore gut-munching explicit gore, and overall quality filmmaking, it was only a matter of time before the cinematic knockoff artists from the land of pasta and awe-inspiring tits began cranking out shameless cash-ins. To the best of my knowledge, director Lucio Fulci's ZOMBIE was the first and probably most high-profile of the DAWN clones, and I distinctly remember being intrigued by ads for it on local TV when I was in junior high school. (The film was released in the States during the summer of 1980, a little over a month before I hit high school.) It was one of those flicks that made a big noise in its ad campaign about admission to those under the age of 18 being totally out of the question — in other words skirting the MPAA's regulations on gore and violence by essentially giving itself a self-imposed "X" — but I did not see ZOMBIE until it ran during one of the  now-legendary (to us locals, anyway) "Scream All Night" festivals at Norwalk, CT's Sono Cinema, a beloved venue where I got my most concentrated doses of early education in projected cult movies. By that point I had seen and loved DAWN OF THE DEAD, so I was eager to see the film that in Italy was released as ZOMBI 2, cribbing DAWN OF THE DEAD'S Italian title, ZOMBI, and attempting to fool audiences into thinking it was a direct sequel to Romero's masterpiece. What I got when I finally saw Fulci's knockoff was a 91-minute endurance test that lacked everything that made the film it was attempting to cash in on excellent. It was boring, the plot was perfunctory at best, and the gore was merely present but not inspired in the least. To be fair, even the cheapjack and genuinely awful movies of Herschell Gordon Lewis packed more of a visceral wallop than ZOMBIE, and some of those films predated it by nearly two decades.

The non-scary, ultra-dull and un-interesting plot involves an investigation into the disappearance of a research scientist, an investigation that leads to a tropical island where the flesh-eating dead walk the land, blah blah blah... It's all just an excuse for its gore sequences, and the film lays there on the screen like week-old roadkill when gore, violence, or nudity is not taking place. Seriously, I was at a loss to explain the film's popularity just over three decades ago and I'm just as amazed by the movie's enduring popularity among horror and gore fans today. I know there's a certain undemanding element in horror fandom that will heap kudos onto just about any piece of shit as long as it features zombies or a modicum of blood, disembowelment, and cannibalism, but should those elements automatically grant a pass to a film so unrelentingly turgid?

So, having established that ZOMBIE basically sucks, please allow me to note the three factors that assured it would live forever in my memory and the memories of others who have sat through its onslaught of torpidity:

When your horror movie is tipping over the edge into torpor-inducing boredom, it's time for titties to the rescue!

Now that you've seen this admittedly innovate image, you don't really need to sit through the film in its entirety. You're welcome.

The old "injury to the eye motif," as it was called when such material was discussed relating to explicit comic books in the 1950's.

So, by now my disdain for ZOMBIE should be clear, and I'm glad to say that viewing it again for this year's 31 Days of Horror has cemented my opinion on it, thus allowing me to finally be done with it once and for all. That said, your mileage with it may vary. I'm over-saturated on zombies thanks to nearly two decades of them being perhaps the most ubiquitous horror presence in pop culture, but most folks I know just cannot get enough of the undead, no matter how sub-par the works featuring them may be. And for the record, I have seen several zombie movies that are far worse than ZOMBIE in every respect, but I nonetheless only recommend this film for undemanding zombie movie completists. 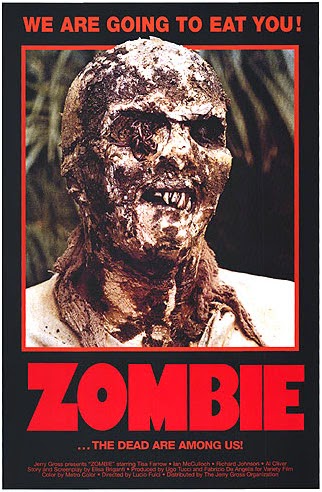