SHOWTIME ON THE BROOKLYN-BOUND Q TRAIN 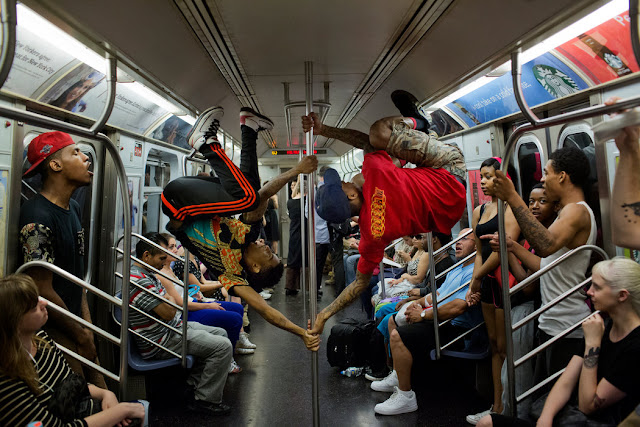 With the advent of summer, the subways once more become infested with "performers" who wander from crowded car to crowded car, subjecting innocent commuters to whatever acts they choose to foist upon us. Perhaps the most common and genuinely irritating of these born-too-late-for-THE GONG SHOW "entertainers" are the ones who fancy themselves acrobatic "street dancers" and crank ultra-loud (and usually awful) hip-hip out of cheap portable boom-boxes while they turn the available poles and other hand-holds into their personal jungle gym. They do back flips and twirl around the poles, their flailing limbs coming dangerously close to nailing their captive audience in the face — and sometimes they mis-time their moves and do indeed kick people in the head — and once their seemingly-interminable "act" is over, they demand money for their efforts, usually employing some sort of would-be-clever, poorly-rhymed come-on. Only those who are tourists or who have never been held hostage between train stops by these assholes find them even remotely entertaining, and there's an immediate air of resigned dread whenever they boisterously enter your car. When they are present, whatever modicum of mental peace or quality reading time you had achieved is dashed like an ice cream cone falling in fresh Rottweiler diarrhea on a filthy sidewalk.

Today's extra-special example of this obnoxious aspect of NYC living opened with a middle-aged homeless woman walking onto the packed Brooklyn-bound Q train at Union Square and loudly asking if anyone could spare her some change or something to eat or drink. Harmless enough, and she made her way down the car politely, so she engendered no ill will. Then the train stopped at Canal Street and two thugged-out B-boys in doo-rags boarded, bearing the dreaded boom-box. As they began to set up, a pretty young woman asked them, semi-jokingly, if she was about to get kicked in the head, to which one of those fine young men instantly responded with "YES!" Not being a fool, the woman immediately made her way to a far end of the car, after which the performers cranked their shitty music and launched into their uninspired routine. Less an example of choreography and more a display of grand mal seizure as pole-dancing, their moves of course came close to taking out a few of the passengers, but the one most offended by their efforts was the aforementioned homeless chick.

Annoyed at the two performers horning in on her panhandling action, the woman scathingly jeered at the young men, calling them every name in the book, noting that no one wanted to see "their weak-assed shit," and generally calling them out for being the unwanted disturbance that they were. Rather than just ignore her jibes, the lads instead chose to fire back at her, but they had not counted on encountering a rare homeless black woman who was lucid, witty, and vicious with her words. One of the men tried to save face by calling her out for "bringing negativity," but she shot back with a withering "what-EVUH" that registered like a hard punch to the mouth. The other, more thuggish of the pair got in her face with a torrent of profanity, calling her a "bitch" and a dumb-ass cunt," to which she shot back with some choice comments about his mother.

The  thuggish performer rushed up to her and challenged her to say another word about his mother, threatening to "slap the fuck" out of the homeless chick. Showing not one iota of fear, the woman again talked smack about his mother, which prompted him to get close to her and lunge in that ages-old intimidation move, complete with upraised hand ready to deliver a backhand, hoping that she would crumble and flinch. All that his threat did was activate her "crazy angry black woman mode," and she hurled herself at him with a vengeance, cursing like a maniac while battering him with solid punches and knee strikes to the body. " I DARE YOU, MUTHAFUKKA!!! I FUCKIN' DARE YOU!!!" filled the air.

He absolutely was not expecting that response — more fool, he — and his raised backhand immediately morphed into a feeble, ineffective shield against her kicking of his ass. As the standing passengers moved out of the way — with no one offering to help the woman, as she clearly did not require assistance — the train pulled into the DeKalb Avenue station. When the doors opened, the thug under attack swiftly moved to leave the train, taking his partner with him and stating, with the last shred of his impotent bravado/dignity spiraling down the proverbial bowl, "Fuck you, bitch! I don't hit women!" (You may not hit women, but you sure as hell didn't hesitate to feign being ready to do so, you fucking pussy.) As they fled, the pair were followed out of the train by the woman, who was still in full-on attack mode.

Once the dust settled and the train once more got underway, the tension in the atmosphere dissipated and the passengers all exchanged glances as we tried not to laugh our asses off at the idiotic display we had just been privy to. And the saddest thing about this is that that was merely the first such incident of the summer, a season which technically has not even started yet...
Posted by Bunche (pop culture ronin) at Saturday, June 16, 2018

I generally try to get in the way of those douchebags as much as possible. I’ll hug a pole or stretch my legs out. The wife is convinced I’ll get stabbed one day.