THE PAUSE THAT REFRESHES? 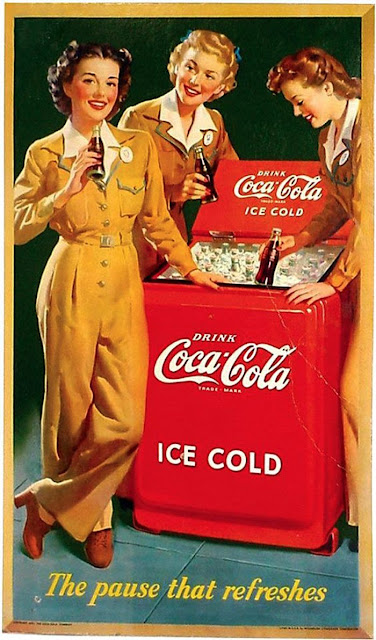 After downing some phosphorus blockers in order to make doing so safe, I just had my first Coca-Cola in nine months — one of the real ones, the Mexican iteration with actual sugar in lieu of high fructose corn syrup, in the vintage-style bottle that you can use as a handy weapon when you finish drinking its contents — and after having been off of them for nearly a year, I found its flavor to be quite underwhelming. Not at all the refreshing elixir I once so dearly cherished. Dialysis patients are advised to steer clear of dark sodas due to their high phosphorus content, and instead we are steered toward clear items like ginger ale, 7-Up, Sprite, seltzer, and such, so that's what I have gone for when I craved an effervescent libation of late. And if I want a sweet drink I go for either one of the fruit nectars put out by Ceres (which I dilute by half with water), or I have some of the grape Kool-Aid that I have at the ready in a half-gallon Mason jar in my fridge. (Diluted with water by more than half the recommended amount, plus four long pours of concentrated lemon juice for tartness.) Other than those options, I stick to refrigerated water. (Oh, and I did have two standard cans of Coke while over at Tracey's during the past few months, but those were downed in order to settle my stomach when going to her place immediately after dialysis. After those two specific lapses, when at her place I have stuck strictly to seltzer.)
I understand how folks become addicted to sugary sodas, and my gateway to them came when I worked at my hometown's flagship movie theater during my youth. I had unlimited access to the concession stand's soda machine, so every shift I would consume perhaps two large containers of Coca-Cola straight from the tap, with some extra seltzer to give it a more "crisp" zest. I'm not a coffee drinker, so sodas like Coke and Dr. Pepper were my go-to source for a caffeine boost, back when I still required caffeine. Now, however, I never feel a need for caffeine and, coupled with the medical restriction on drinks high in phosphorus content, I had no urge for a Coke until about an hour ago.
Having gone for nearly a year without downing a real Coke — or a Dr. Pepper, which I greatly prefer; southern genetics — I find that my palate has adjusted, and "the Real Thing" simply no longer does it for me. I'm curious to see how my adjusted palate will react to Dr. Pepper, as I plan to have at least one during the upcoming summer cookout season, but I will absolutely continue to use it as the liquid base in the sealed pan when I prepare slow-cooked shoulders of pulled pork in my oven.

We have real Coke here in Canada too (with sugar), probably harder for you to find down there than the Mexican stuff though. I like your blog btw.
~Jim