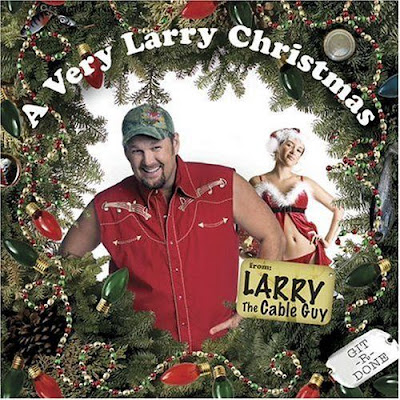 Yes, there is a holiday album that actually managed to beat A JOHN WATERS CHRISTMAS as the season's most jaw-droppingly outrageous offering. My vote for Christmas album of the year goes to A VERY LARRY CHRISTMAS, an hilarious and offensive masterpiece by one of those usually awful redneck comedians seen on BLUE COLLAR TV and the redneck comedy tours. It's not a live performance, it's Larry in the studio telling Christmas stories and singing holiday related songs that are so tasteless — and distinctly Southern in approach — that this album may just edge out the reigning champ of vile Christmas albums for the past twenty years, John Valby's infamous JINGLE BALLS, which included the mind-roasting "Leroy the Big-Lipped Nigger" (think the tune of Rudolph applied to a piano bar ditty about the title character's neighborhood ethnic cleansing via shotgun of a bunch of "guineas" who are randomly "beating up Polacks, stompin' on niggers, spreadin' grease all around"). Hearing this after seeing the guy on TV was like seeing Liz Berkely in SHOWGIRLS after SAVED BY THE BELL. A sample of Larry's genius:

(to the tune of "Frosty the Snowman, but done without benefit of musical accompaniment)
Donny the retard/ had an eight-pound water-head
He was five-foot-three and he said to me "I like biscuits!"

(to the tune of "The Most Wonderful Time of the Year," also sans music)
She has the most wonderful ass
That I've seen
It's round and it's firm and it's
lean and it's mean
Too bad she's fourteen...
But we've all been to the mall
So ya know what I mean

And if those bits don't sell you on this, check out the following; I can relate to it since it's the kind of thing I often heard as a lad from my uncle Clady or my granddaddy Ozane:

This here’s more geared toward Thanksgivin’, but still a nice holiday.
This is the story of the first Thanksgiving, once again by my drunk grandpa:

When they landed on America an Indian squaw named Sack-A-Jew-Ee-Uh met them and traded them pelts for beer and then showed ‘em how to de-gut a rabbit. That night her friends danced around with their boobs hangin’ out and balanced clay pots on their heads. The head pilgrim then baptized all the Indians to be Christians and they shot turkeys and played horseshoes. It was General Custer’s birthday and three Oriental kings showed up with presents of myrrh and other crap.

Many pilgrims didn’t survive the first winter ‘cause they didn’t have heat ‘cause Jimmy Carter, who was president of the pilgrims, had an oil embargo. Sack-A-Jew-Ee-Uh and her Indian friend burned buffalo turds and heated the camp. The pilgrims was thankful. However, it smelled so bad animals came outta the woods two by two. The Lord then made a rainbow appear, to let the people know that he would never make turds burn again and cause a horrible smell.

Sack-A-Jew-Ee-Uh fell in love with Kemo-Sabe, and they were married on that first Thanksgiving and lived in a tent with wheels. That’s right!

All the pilgrims were happy they were away from the king and safe in a new land, and to beat that they all landed right on Thanksgiving day. Charlton Heston was then elected president.

larry the cable guy DID NOT sing "leroy the big lipped nigger". that was David Allen Coe... just so you know.

above post was dumb as you stated he did a cover of it. It was also done by John Valby