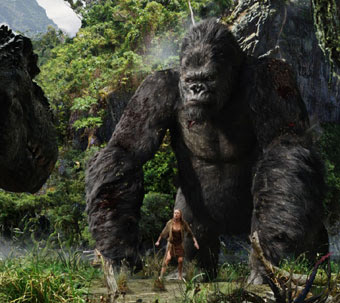 I finally saw Peter Jackson’s remake of KING KONG yesterday and while it is in no way a bad movie per se — and is infinitely better than Dino de Laurentiis’ 1976 cinematic atrocity — I have to say that is not for me.

Despite the fact that the 1933 original is my favorite movie, I divorced myself from the classic KONG for a few hours and trudged to the local multiplex, a strategy that helped me kill time until a cozy dinner party with some dear friends whom I hadn’t seen in months (barbecue joint schedule, dontcha know). Girded with a big sack of “buttered” popcorn and a fruit punch large enough to last through a three-hour-plus flick, I scoped out a seat that gave me a perfect centered vantage point in the virtually empty cinema. The lights dimmed, the commercials and trailers — all of which were pretty feeble — cranked by and then the film started.

We all know the basic tale: an ambitious filmmaker/showman leads an expedition to an uncharted island to film a fantastic monster. Said monster gets a major hard-on for the blonde starlet of the piece when she is sacrificed to him by the local crazy Negroes (in the South Seas???), hauls her up to his mountaintop crib through an island full of every horrifying creature imaginable while the film crew and sailors follow and meet hideous deaths, and is eventually captured and put on display on Broadway. The monster then escapes, snags the blonde again, climbs to the top of the then new Empire State Building, battles some biplanes, gets shot off of the building, plummets to a messy end and inspires the filmmaker/showman to state that “It wasn’t the planes that got him…It was beauty killed the beast.” THE END. The Jackson remake follows the same basic plot, but with a few tweaks and I will discuss in detail, so if you haven’t already seen the new one stop reading now for HERE THERE BE SPOILERS.

As you know the basic plot, I’ll just break certain elements of the film down, plain and simple.
And that’s pretty much all I have to say about the new KING KONG. It’s an acceptable time-waster and really isn’t a bad movie, but as previously stated, it just wasn’t for me and as such disappointed me greatly. I seriously doubt that I could endure a second viewing thanks to its pacing, and I also doubt whether I’ll ever shell out the cash for the DVD. There's just no trace of "movie magic" to be found here. But don’t let my somewhat negative review keep you away from the box office; the giant monster genre needs a serious shot in the arm, and if KONG is a success it may pave the way for superior successors.
Posted by Bunche (pop culture ronin) at Tuesday, December 20, 2005

I'm not surprized at your review of Kong because the "blockbuster" movies coming out of Hollywood are uniformly mediocre (and that is being kind). I don't know how you hold out hope for an improved sequel. I never understood Kong's love for the blond woman either (even in the original). He's a 25 foot tall ape and she's a 5 1/2 foot tall woman. What the? That's like having a movie where an elephant falls in love with a duck. That made no sense even to ten year old me.

But I think you're being too hard on Dino D.'s version. Remember his plan to make a sequel? The one where a mad scientist was going to "make Konk come back from the dead like Fronkenstein", and when Dwan jumps up on his hand and says "Hi, Konk, remember me?" Konk smile and then WHOMP - he eat her?

Okay, some of that was from Belushi's version of Dino on SNL, and I think the rest was from one of the Medved brother's books, but still...

Seriously, I know that you don't agree with me on this, but I never thought Peter Jackson was all that great. You'll probably want to kill me for saying this, but I suspect that The Frighteners was probably his best movie.

The Frighteners???? Are you on dust? Acid? Whippits? Opium? Hepped up on goofballs?

"I'm not surprized at your review of Kong because the "blockbuster" movies coming out of Hollywood are uniformly mediocre (and that is being kind)."

Mediocre is WAY too nice a word. Most suck balls. 99% suck balls. Kong not withstanding, Jackson (occasionally along with Brian Singer and Spielberg), however, seems to be one of the few movimakers who can pull it off.

I'd love to see him make "The Hobbit" and finish the whole Lord of the Rings thing. Wouldn't it be great if he used the incredibly goofy, folksey Glenn Yarbourogh original songs from the Rankin-Bass cartoon?

I gotta tell ya, Buncheman, John and I LOVED it! ESPECIALLY all the neat references to the original (which I also ADORE!)...the comment Denham (Jack Black) makes about getting Fay, but she's doing an action picture with Cooper, the titles (which exactly match the orignal), the scene on the ship when Black is filming, and Anne and what's-his-name (okay, I give you this one, he wasn't really necessary to the film, y'know, the actor Black hired--who was he, by the way, he looked so familiar!) were repeating verbatim the dialogue between Ann and Jack from the first movie, the hokey natives from the first movie recreating the scene from the first movie, down to the dance, the music, and the costumes, on the stage, the fake Ann exactly reproducing Fay Wray's desperate attempt to escape from her ropes when Kong is threatening her on the stage...I'm sure there were a lot more, but I'll have to see it again to catch it.

As for the updating of gorilla behavior, well, that didn't bother me, because today's audience IS more aware and sophisticated, thanks to books and movies like GORILLAS IN THE MIST...in fact, I enjoyed it.

That scene in the ravine was absolutely horrifying and totally delicious and cool!

Some things did bother me...the scene in Central Park on the ice bothered me because OF COURSE Kong would have broken through the ice (unless it was solid all the way down)--again, the addition of the action movie star instead of Jack Driscoll being the first mate as in the original...I thought the fake Ann was unnecessary, and I would have like to have seen Jackson copy the orginal and have Ann on the stage.

I did like Adrian Brody, however, very much...and I got a kick out of the subtle irony of the writer being kept in the cage by Hollywood (symbolized by Denham, of course.)

Did you know that Denham's assistant was played by Colin Hanks, who is Tom Hank's son?

Haven't seen it, but I'm hearing that Peter Jackson has been taken by the dark side. I thought he was the only guy who understood how to pace CG so you actually were impressed when it came along. Now is he clobbering us over the head with it like every other sucker? *sigh*

P.S. Loved the card, tho' it confused the wife.
I like "Creaturemofo"!
Thanks, I think I'll take it!