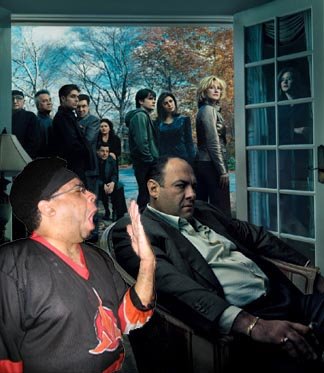 Well, I recently sat through the first twelve episodes of the supposedly final season of HBO's THE SOPRANOS, and I have to say that I think the show has officially "jumped the shark." There have been previous seasons that caused others to make the same statement, but I still stayed loyal despite the varying highs and lows of each season that followed the entirely superb first year. Sadly, this year was a catalog of bad creative decisions with only the occasional return to form, adding up to a big fucking yawner that pretty much went nowhere. So what, exactly, am I bitching about? Let me break it down for you, both the good and the bad, and keep in mind that all of this stuff is contained in twelve hours worth of episodes.

SPOILER WARNING-READ NO FURTHER IF YOU ARE A REGULAR WATCHER AND HAVE NOT SEEN THE TWELVE EPISODES IN QUESTION!!!

- In the only plotline that I really gave a shit about, secretly gay mob captain Vito being accidentally discovered in a Manhattan leather bar — in perhaps the most stereotypical leatherman gear depicted on screen since CRUISING — lead to all manner of truly heart-wrenching, suspenseful stuff. Once Tony's crew get wind of his extracurricular activities, there is much back and forth on how to deal with Vito's lavender lasagna, with most of popular opinion definitely leaning toward having him whacked to protect both the honor of the Family and erase the "shame" brought on by Vito marrying Phil Leotardo's sister,even though Tony publicly states that he's willing to let the whole thing slide. In previous seasons we had seen Vito as a minor background figure whose homosexuality was rather graphically dicovered by Meadow's cipher/dental school student boyfriend, a revalation that spurred Vito to hit on the guy in an act of blatant lust and intimidation. The boring boyfriend avoided becoming a human pincushion by proposing to Meadow, thereby rendering himself immune from all harm by becoming Tony Soprano's soon-to-be son-in-law. Anyway, once he's outed Vito leaves his wife and kids and hightails it to Vermont in hopes of finding a cousin up there that he can hole up with. Unexpectedly, Vito finds a love that he can openly express for the first time in his life and he comes to terms with himself, but his newfound happiness doesn't have the same "oomph" that his mob existence provided, to say nothing of him feeling heartfelt agony over abandoning his wife and kids. Poor Vito loves his family very much, and his wife is less concerned about his homosexuality than she is with having him come home; yes, the gay thing is an issue, but she really loves the guy and is willing to work things out. Unfortunately, Phil just can't stand the idea of his sister and her kids being "disgraced" by Vito's double life, so when Vito finally gets up the courage to return home and face the music, hateful tragedy ensues...

- The wedding of Johnny Sack's daughter is the total polar opposite of Connie Corleone's nuptials in THE GODFATHER, thanks to the theoretical happiest day of her life having a slowly mounting sense of ominous tension that pays off in spades, breaks the audience's heart, and loses Johnny the respect of the majority of the crew. Yeah, the mob dudes are highly emotionally volatile, but Sack's all-too-understandable meltdown is a classic that will actually make you nauseous; sure, the guy's a crook, but that sequence is a real punch to the kidneys.

- Hal Holbrook's turn as a terminally-ill rocket scientist who befriends Tony during his post-shot-to-the-gut hospital stay was a series highlight, especially his unexpected effect on Tony's outlook. See it and judge for yourself.

- Once out of the hospital, Tony realizes that he may be perceived as weak due to his physical condition and his kinder/gentler attitude, so he reasserts his dominance by kicking the motherfucking shit out of his young steroid-casualty-to-be driver. A savage return to form that reminds of the fact that these guys are a bunch of fucking sociopaths.

- All that tedious bullshit about Carmella's spec house and Tony's endless "forgetting" to talk to the proper people who can force the construction forward. This material seemed endless, and I just did not give a fuck.

- Meadow the mob princess working in a law frim that represents downtrodden immigrants is just too obvious of a plot device that allows her to do good despite her background, and if I had to hear her go off one more time on the violation of people's civil rights, I swear to the gods that I would have put my boot through the TV screen.

- I know that Tony's sister, Janice, is supposed to be a walking irritant, but they really amped up her annoyance factor this season, almost to the point of being torturous.

- The double whammy of Paulie Walnuts discovering the truth about his mother and coming down with prostate cancer seemed like a case of tragedy overkill, and as a result I felt that neither plot amounted to very much.

- Last season's uber-long dream sequence got on my nerves, and this year they stretched out Tony's perceptions while in a coma for a few episodes, thereby trying my patience. One of my closest friends spent time in a coma, so I know that waiting for someone to come out of it is an excercise in anticipation, but this plot line ended up simply being excrutiating.

- The attempt at a comedy subplot involving Bobby and the rap guy goes absolutely nowhere.

- Carmella finally starting to figure out that Adrianna most likely did not run away struck me as false; Carmella is no dummy, and since she's aware of what goes on in the life that her husband leads, I refuse to believe that the thought that Adrianna was whacked never even entered her mind.

- While I understand that a near-death experience can change a guy, I really didn't buy the kinder/gentler Tony Soprano, especially when contrasted with his philosophizing while still engaging in animalistic brutality. Maybe that was meant to point out his hypocrisy, but it didn't work for me.

- Every story revolving around A.J. failed to catch my interest, and he's such a stupid, useless, spoiled little fuck that I just want to knock his teeth down his fucking throat.

And now the series goes on hiatus again, with eight final episodes promised in early '07, and while I will watch to see how it all turns out I have pretty much lost interest in THE SOPRANOS. In many ways I feel that it has taken a nosedive just like HBO's OZ, although not as quickly, but that saddens me greatly since THE SOPRANOS once ruled the airwaves as probably the best serial drama to come along in a very long time. Now, it just sleeps with the fishes.
Posted by Bunche (pop culture ronin) at Tuesday, June 20, 2006