THE GREATEST VILLAINS OF ALL TIME: DR. MIGUELITO LOVELESS 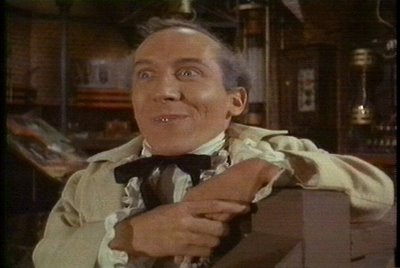 Hopefully the release of season one of THE WILD, WILD WEST on DVD will erase the utter uselessness of the big screen version from a few years back that starred an outrageously miscast Will Smith, and simultaneously introduce neophytes to the awesome villainy of television’s most unique bad guy. I am, of course, talking about the one and only Doctor Miguelito Loveless.

In case you don’t know what I’m going on about, THE WILD, WILD WEST was perhaps the most bizarre bit of fallout from the spy boom of the mid 1960’s, a fast paced, violent western set in the 1870’s that gene-spliced with the superspy genre to more or less invent the concept of steam-powered high technology. In any given episode, invariably entitled “The Night of the (FILL IN EPISODE’S SUBJECT HERE),” the secret agent duo of dashing tough guy James West (Robert Conrad) and master thespian/disguise virtuoso Artemus Gordon (Ross Martin) traveled the country in their tricked-out private train, meting out ass-whuppin’ justice to enemies of America and scoring with the hottest chicks that the Old West had to offer. In other words, they set the Wayback Machine and James Bonded up the place. And, amusingly enough, the show was not cancelled thanks to low ratings; it got the axe due to CBS’ campaign to cut down on much if its violent programming content.

West and Gordon’s adversaries were an eccentric lot, each prepared to unleash some sort of mad scheme to overthrow or undermine the US government, but none stood out more than a three-foot-tall, childlike madman whose skills and achievements were far beyond their time.

Doctor Miguelito Loveless was indeed a dwarf, but his diminutive size served as a sharp counterpoint to his gargantuan intellect; during the course of his ten appearances during the program’s four-year run (four of which are found in season one), Loveless would casually gloss over the minor “trifles” found in his lab, such as the phonograph, the camera, penicillin, the airplane, television, and many others, but his awesome technological leaps pale in comparison to his megalomaniacal endeavors, most of which are fueled by petulant desire for retribution against those who wronged him in some way or made the fatal error of underestimating — and thereby patronizing — him due to his size.

The son of a landed Mexican/Spanish noblewoman and an English father, Loveless has a charmingly aristocratic air about him, and he is unquestionably cultured; frequently seen in the company of Antoinette, a talented harpsichordist and songbird, he often performs lovely duets with the chanteuse and during these moments his tender side is most unguarded. He openly displays a great affection for the smaller life forms and goes out of his way not to harm even a fly, but human antagonists are another story entirely. 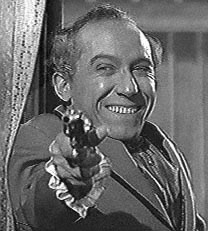 Ruthless and homicidal to an alarming degree, Loveless has no qualms whatsoever about committing wholesale mass murder in the most violent and sadistic of ways, yet he is surprisingly not evil; the man is definitely insane and probably what we now recognize as bipolar, but his flouting of the law and basic decency when it suits him is a reflection of a frightening amorality that runs unchecked despite the constant interference from James West and Artemus Gordon.

Monstrous intellect notwithstanding, being as small and feeble as he is can be a major obstacle for Loveless, so he must at times rely on the aid of his giant companion, Voltaire (Richard Kiel, later to be more widely known as Jaws in the James Bond films) and the enormously obese Kitty, the presence of whom only adds to the sideshow-like sight of the
wobbly little fellow.

It is difficult to sum up just what it is about this character that makes him a classic without showing you some of the episodes that involve his chicanery, but one thing that is indisputable is that Loveless would have been swiftly forgotten if not for the actor who played him, namely the late Michael Dunn. Dunn was a classically trained stage actor and cabaret performer who suffered lifelong pain common to the complications of dwarfism, and when he was tapped to play Doctor Loveless he was already an accomplished Broadway and off-Broadway player. Other than Miguelito Loveless, Dunn is best known to cult TV geeks for his turn as Alexander in the “Plato’s Stepchildren” segment of the original STAR TREK series.

Dunn as the tormented Alexander in "Plato's Stepchildren."

Notably, that episode has gone down in American broadcasting history for containing TV’s first interracial kiss. Leave it to that intergalactic gash-hound, Captain Kirk, to blaze a trail where no man had gone before (well, not on television, anyway…). 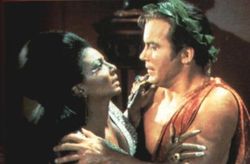 Tragically, Dunn died from an overdose of prescription medicine, a death that some feel might have been a suicide. Fortunately, we have DVD to preserve his brilliance forever, and if you have never seen his work I strongly urge you to go out and rent THE WILD, WILD WEST season one immediately.
Posted by Bunche (pop culture ronin) at Saturday, July 08, 2006

Yes! Dr. Loveless is one of the best bad guys in TV history. In fact, there were times in the episodes I've seen that I almost wished he would win; does that make me a bad person?

I also can't help feeling a little sorry for the little fellow, as Kitty points out in "The Night of the Murderous Spring." As far as I can tell, he's Jim and Artie's best adversary, because he really doesn't seem to think that he's doing anything wrong.

And yes, Michael Dunn was ideal for the role. Much better than Kenneth Branagh in the movie we do not speak of (though I do like Kenneth Branagh). Let me know if I'm talking too much.