WHAT I DONE BEEN READIN’

With all the running around I have done lately I hadn’t had a chance to leisurely read the ever-growing mountain of comics and books that I accumulate on a weekly basis, so for this installment I just dove in and slammed myself with reading material for the past few days. So, here we go: 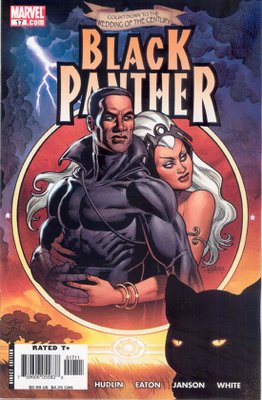 I never, and I do mean NEVER, liked the Black Panther when I was a kid because even though he was one the handful of black heroes at the time — thereby making him a mandatory read for us wee highly rhythmic individuals — it was blatantly obvious that he was being written by people who nothing of the Black experience. In other words, well-meaning white folks. Thankfully, these days we have a lot more of us hardcore unemployables making headway in the four-color field, and the Panther is now being scribed by none other than well-regarded film director Reginald Hudlin, a guy who has obviously given a lot of serious thought to what needed to be done to make the Panther a truly viable presence in the Marvel Universe, rather than just being the obligatory noble Black dude; you know, sort of the Sydney Poitier of comics. Prince T’Challa of the super-scientific and uber-badassed African nation of Wakanda finally really comes across as a figure to be respected and even feared, with Hudlin providing him an appropriately regal air of the type not seen in Marvel’s legitimately royal characters since the Sub-Mariner when portrayed well (only the Panther isn’t a stuck-up prick). I read the initial six issues of this series with great enthusiasm and was worried that the high level of entertainment quality could not be maintained after the departure of John Romita, Jr. on art duties, but month-by-month I have been blissfully surprised. The current story arc has to do with T’Challa finally getting off his black ass and finding a bride — what’s a royal bloodline without heirs? — and not just any bride, but none other than Ororo Munroe, better known to you as Storm, the X-Men’s resident weather witch/goddess/hottie/bad motherfucker. Hudlin has worked minor miracles with this development, taking the romance angle and making it genuinely fun and frequently quite funny, with the Panther and Storm proving to be perfect for one another, true equals, a mating of eagles if you will. This current chapter focuses on Luke “Power Man” Cage’s efforts to organize a balls-out bachelor party for our hero with guest stars in tow, and Ororo’s girl-time moments with Kitty Pride and Sue “Invisible Woman” Storm. It’s a fun ride all the way, and I’m very curious to see what happens at the wedding itself; the template for this kind of thing goes back to the wedding of Sue and Reed Richards way back in FANTASTIC FOUR ANNUAL #3 (1965), and since that story featured a shitstorm of nigh-incomprehensible action and mayhem that guest-starred damned near every single character in the Marvel Universe at the time, that’s the superhero nuptials to beat. And considering what has gone on since the Panther’s relaunch, I have no doubt that Hudlin and whoever illustrates the event will make it a tale to remember.

CIVIL WAR #2, FRONTLINE #2, FANTASTIC FOUR #538, NEW AVENGERS #21- I have to admit that I was very skeptical upon hearing about Marvel’s latest big crossover “event” since such stories are more often than not anything but, DC’s horrendous INFINITE CRAPFEST, er, CRISIS being a blatant case in point, but I am now officially on board for CIVIL WAR after the first two issues and the few connecting chapters in other Marvel books that I have read. As you may recall, the series deals with a law being passed that requires all superheroes to register with the government for training and to publicly reveal their identities or else face outlaw status and legal/federal retaliation after a disastrous situation in which the New Warriors botched the apprehension of a bunch of bad guys, resulting in the deaths of six-hundred civilians, including children. The first two issues saw the lines being drawn between the supers who support the legislation and those who oppose it for a variety of legitimate reasons, with two major pieces of fallout: Captain America telling the government (in this case represented by the super-espionage group S.H.I.E.L.D.) to stick it up their collective ass when he is ordered to hunt down any of his colleagues who won’t comply, and the shocking (to say nothing of potentially stupid) move of having Spider-Man reveal his true identity via unmasking on live national television. Both of these incidents have already had major repercussions for the heroes in question (unlike the bullshit in INFINITE CRAPFEST) and I am solidly hooked. Cap is now a wanted fugitive who has re-teamed with his old pal the Falcon (a black mutant who has the mutant ability to communicate with his pet falcon, Redwing. You call THAT a superpower?) in an effort to establish a group of like-minded supers who will take the fight to the government, while Peter Parker once again takes it in the ass for doing what he thinks is right; after revealing his identity, with the full approval of his wife and his aunt, he’s relentlessly hounded by the media, has a five-million dollar lawsuit filed against him by the Daily Bugle for “misrepresentation, fraud, breach of contract, and several other related charges,” and gets a real fisting when that dickhead Tony “Iron Man” Stark — an utter fucking asshole of a character who I have loathed since childhood, cool armor notwithstanding, that prick! — suddenly informs him that he’s part of the new anti-unregistered-super Gestapo. Marvel has been at the forefront of the superhero-story-as-soap-opera genre since 1961, hell, they invented the shit, and this current epic brings that element back in spades, both well written and well drawn. More, damn it! MORE!!!

And on the Fantastic Four front during all of this mishegoss, Johnny “the Human Torch” Storm has been beaten into a coma by a group of hooligans in the wake of the anti-super sentiment, and Ben “the Thing” Grimm — one of my top three favorite superheroes of all time — must wrestle with the moral implications of what the superhero registration act means for him and others of his community, and which side of the battle he falls on. Being a Jew, he can see the similarities to the start of horrors directed against a certain ethnic group in the not-too-distant past, and that does NOT sit well with him, especially since Reed “Mister Fantastic” Richards, one of the core of the FF, supports the shit with his usual clueless brilliance.
HIGHLY RECOMMENDED. 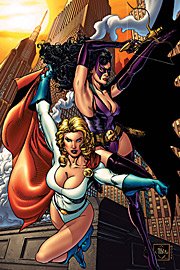 For all intents and purposes this book should just admit what it is and be call WORLD’S FINEST, but since it is one of the most inconsistent books out there, perhaps its current name is all for the best. There’s nothing here to give a shit about other than some of the liveliest art that Kevin Maguire’s done in some time, but the hook of this particular story is that Superman and Batman have had their minds transferred into the bodies of Power Girl and the Huntress, and while that idea goes absolutely nowhere, I just love the idea of Superman having to adjust to lugging around Power Girl’s legendarily huge jugs. 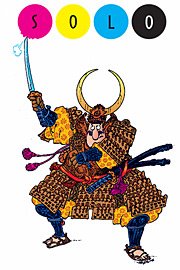 DC’s hit-or miss SOLO series devotes each issue to a spotlight on the talents of various individual artists and sometimes yields gold for the discerning comics fan; previous issues have given us a solid forty-eight pages of such luminaries as Jordy Bernet, Richard Corben (one of my absolute favorites), Scott Hampton, and the incredibly dubious inclusion of Damien Scott (Mark, what the fuck were you thinking?!!!?), but his time around we get Sergio Aragones SERGIO MOTHERFUCKING ARAGONES, indisputably one of the greatest naturally talented cartoonists ever to draw breath, let alone pictures, and if you don’t go out right now and buy this issue I will hunt you down and pull your scrotum over your face by way of your useless ass crack. Yeah, there have been a zillion collections of the guy’s work, but this one is particularly interesting thanks to Sergio illustrating various true stories from his career, along with a couple of his signature silent tales. 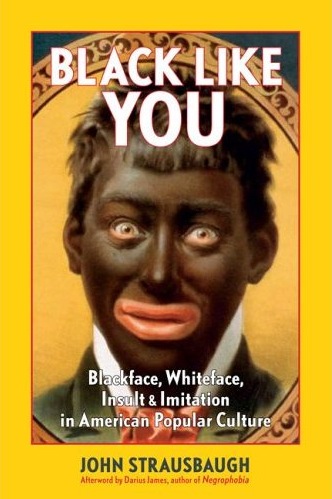 In short, this book is an exceptional history of what blackface and minstrelsy mean in relation to whether or not it is a racist attack or a genuine expression of love toward black people and our culture. It’s a complicated issue, and author John Strausbaugh sets the record straight with a cornucopia of verifiable facts and general info. No joke, this is the best history book I have read since I don’t don’t know when. Jared, say hello to your birthday present.
Posted by Bunche (pop culture ronin) at Saturday, July 01, 2006

As a musicology companion to the Strausbaugh book, I highly recommend Stomp and Swerve by David Wondrich (a Brooklyn resident and historian). There's also a fascinating--but overpriced--companion CD to the book that contains a sampling of the many recordings referenced.