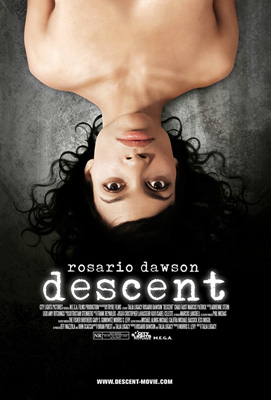 Films dealing with the subject of rape and its sometimes vengeful aftermath often tend to be aimed at the exploitation crowd, an audience that seeks to get its jollies by voyeuristically wallowing in depictions of violence against women, said women being portrayed by actresses willing to get naked for a fast buck. Long a staple of the grindhouse circuit, notable examples in the genre include THE LAST HOUSE ON THE LEFT (1972), and I SPIT ON YOUR GRAVE (1978), each extremely hard to watch during the sequences that feature brutality, yet both have gone on to achieve cinematic immortality and infamy for a number of reasons; both are gritty and cheap-looking, an aspect that lends both films an almost "home movie" feel, and both feature women being horribly abused, followed by gruesome, well-deserved revenge against the perpetrators (in the case of LAST HOUSE the girls must be avenged posthumously, while the heroine of GRAVE takes matters into her own hands with extreme prejudice). Director and co-writer Talia Lugacy's DESCENT mines this territory to interesting effect, and with a refreshingly non-exploitative amount of good taste.

Not to be confused with 2005's spelunking horror flick THE DESCENT, Lugacy's film follows the journey of Maya (Rosario Dawson), a nineteen-year-old college student who meets the scruffy and aggressive jock Jared (Chad Faust) at a keg party. At first repulsed by his alpha male behavior, Maya finds herself charmed by Jared and agrees to go out on a dinner date with him. The date ends up back at Jared's place and a makeout session swiftly devolves into rape as Jared has his way with Maya, holding her down and unleashing his resentment of her perceived snobbish attitude, coupled with a torrent of racially offensive epithets. When the assault is over the story skips ahead to the end of the spring semester and we find that a withdrawn Maya has told no one of the assault and begun a downward spiral into drugs, booze, and promiscuity, effectively drowning the person she was before her violation. Finding emotion-numbing refuge in a sleazy club, Maya meets Adrian (Marcus Patrick), an imposing, buff bartender/DJ of ambiguous sexuality who rescues her from the clutches of some predators who drug her drink. Maya feeds off of Adrian's masculine vibe, admiring the way he dominates all around him and gaining strength from his example, as well as joining him and his cronies as they ingest mountains of cocaine. By the start of the fall semester Maya returns to school and her position as a teacher's assistant, only to find herself proctoring a class wherein her rapist is a student. Maya decides to exact revenge upon Chad and embarks on luring him into her trust in order to set him up, but once he's in her hands, what then?


Driven by across-the-board stellar performances, what could have been a sleazy exploitation effort instead proves to be a thoughtful and thought-provoking work that provides viewers with no simple answers. I've long admired Rosario Dawson for her sense of humor and quirky, sort of cartoonish NYC-homegirl looks, but this is the first time when I found myself riveted by her acting chops and not just her sexiness (I kind of had the same experience with CLERKS II, but that was a comedy). Dawson gets across every bit of poisoned emotion felt by Maya, no mean feat since Maya has surprisingly little dialog although she's the protagonist, but Dawson's expressive face and body language are more than up to the task. I was especially pleased to see that the scene of Maya's rape features no nudity whatsoever (she's wearing a skirt), and while Dawson is in no way shy about getting naked on camera — rent ALEXANDER and discover a reason to live — it was nice to not have images of her lovely self nude, being violated by some vile jock asshole embedded in my cinematic memory. Nonetheless, the close camera setups place the viewer square in the same space as Maya, allowing us to feel her fear, outrage, and helplessness, and I find that far more effective than most other filmic treatment of such horror.

And speaking of said asshole, Chad Faust is terrific as Jared, a pig who's unlikable in the first place and then moves into downright hateful territory. 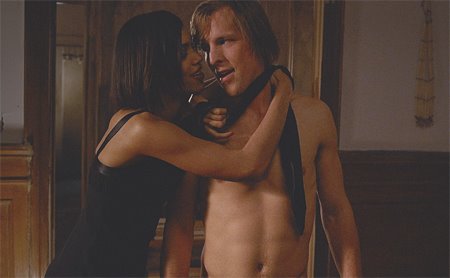 Not merely the jock stereotype, the most interesting things about Jared are small details gleaned over the course of the film. He's shown as pretty much a bench warmer for his football team, making him the "weakest" of a testosterone-filled lot and leaving him open to macho abuse from his teammates, and it's alluded to that his rape of Maya was his pitiful assertion of dominance over someone physically weaker than himself and may not have been an isolated incident. And despite the obvious nature of his deed, Jared blithely continues on with his life, totally unconcerned with what he's done and not even realizing he's committed a crime. When Maya approaches him months later, he's actually convinced that she couldn't get enough of him and happily agrees to meet her again for what he presumes will be more of the same. Hoo-boy, is he in for a seriously rude awakening...

Lugacy's camera perfectly captures the mundane college atmosphere both before and after Maya's summer odyssey to the darkest places of her soul, but the sequences taking place during her descent are shot with an eerie, dreamlike feel that strongly returned me to my long-ago days of all-night keg parties where the carpeted floor ended up as a decent stand-in for a bayou, the air thick with a fog composed of stale marijuana and cigarette smoke, loud music now an unintelligible goulash of noise, one's own perceptions strobing and weaving under the influence of the many chemicals altering one's consciousness, and passed out bodies littering the place like the morning after some terrible battle. It's a surreal, disturbing anti-Wonderland and I couldn't wait for Maya's Joseph Campbellesque return to the real world after being re-forged in Adrian's after hours netherworld.

I highly recommend DECENT but I'm very much aware that it's not for all tastes and I urge potential viewers to keep in mind that it was rated NC-17 for a reason. It's as bleak as they come, but TRUST YER BUNCHE and sit through it in its uncut version at least once and get as pissed as I am that Rosario Dawson wasn't even nominated for Best Actress after this came out. There's no justice, I tell you... And once you're past the initial viewing, make sure to watch it again with the commentary by Dawson, Lugacy, and co-writer Brian Priest. HIGHLY RECOMMENDED.
Posted by Bunche (pop culture ronin) at Wednesday, March 12, 2008

Did our conversation inspire this post? I'm set to be freaked out--you gave just enough information. How about a RTTVOTDolls/Descent double feature?