THE DEVIL IN DESIGN: THE KRAMPUS POSTCARDS (2004)

NOTE: this one's a rerun from two years ago, but it's still quite relevant and definitely seasonally appropos. Also, since I first ran this piece and though it's still listed on Amazon, this book has apparently gone out of print and is now an expensive collectible. 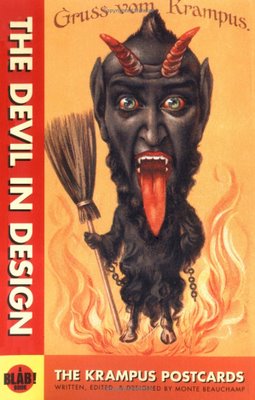 The Christmas holidays are rolling around again, so I'd like to offer a fun gift suggestion for those of you who may know friends and family like Yer Bunche who are sick to bloody death of the usual Yuletide nausea (which, BTW, I began noticing as early as three weeks prior to Halloween!). Back in 2004 Fantagraphics Books issued this delightful collection of antique seasonal postcards from Germany featuring the sinister visage of the Krampus — distinctly not the personification of an aspect of women's monthly concerns — and it makes for a great gift or addition to your own oddball book collection.

The Krampus (or just Krampus for short) is a demonic sort who's actually the helper of St. Nikolaus insomuch as he was an instrument of social-control terror who tormented bad children until they agreed to be good. Armed with a bundle of sticks with which he'd administer a serious "birching," chains for shackling (of himself as well as bad kids; don't ask me what that's all about) and a basket over his back for dropping the naughty into before literally casting them into the flaming pits of aitch-ee-double-hockey sticks, the Krampus is the kind of Christmas spirit I can get behind. I always thought that lyric about Santa Claus knowing when your sleeping, awake and all that other shit was rather ominous because of it's warning to "be good for goodness' sake" hinted at something very bad indeed eventually turning up to lay down some kind of righteous ass-kicking (or birching), and now I know what to expect. 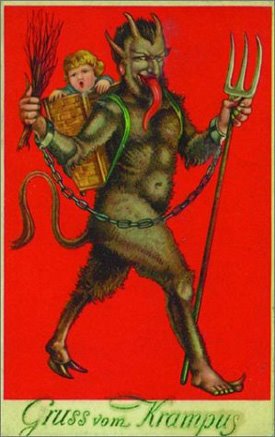 In fact, the existence of "No Presents for Christmas" notwithstanding, I'm kind of surprised that ultra-Satanic heavy metal vocalist King Diamond never tackled another tongue-in-cheek Yuletide tune, only this time about the Krampus, especially considering just how right up his alley the damned thing is. 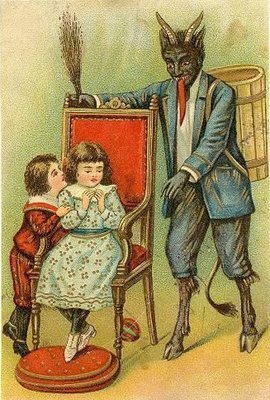 I don't know about you, but if I saw this fucking thing saunter into the room I'd shit hard enough to fill a ten-pound bag and expire on the spot!

This book is a terrific alternative to the forced-down-your-throat cutesiness of the season and is a mindblowing cornucopia of imagery featuring many interpretations of the Krampus that range from downright Satanic to whimsical, erudite and seductive. There's plenty of attention given to the birching of bad kids, but the Krampus is also frequently depicted as something of a ladies' man, even cleaning up his hirsute act and donning stylish hats, fashionable suits, and even sporting that signature mark of Germanic class, the monocle. All of it is in good fun, but the famously-disturbing Teutonic sense of humor runs rampant throughout and yields images that simultaneously manage to charm and repulse. I mean, what the hell kind of Christmas greeting is this? (see below) 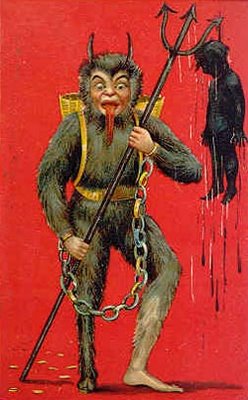 That apparently-tarred and dripping child's corpse dangling from the end of a trident doesn't exactly bring the strains of "Jingle Bells" to mind, now does it?

Surprisingly, the Krampus has actually made its way into American entertainment via the wholly appropriate venue of Cartoon Network's THE VENTURE BROS., an often hilarious sendup of sci-fi/superheroic adventure stuff in general and JONNY QUEST in particular. 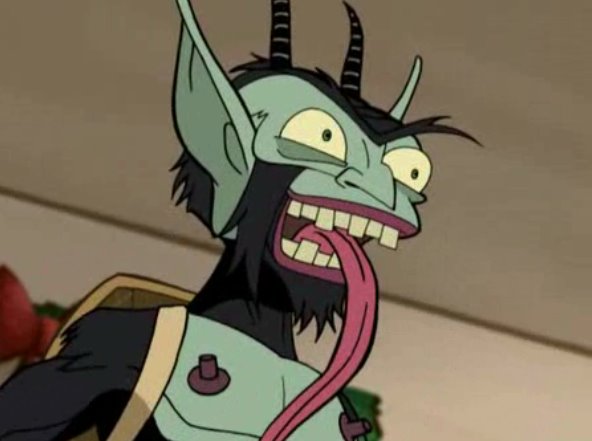 The animated Krampus: Rudolph he ain't.

The 2004 episode "A Very Venture Christmas" features the title characters looking for anything that could entertain them during the family's Christmas party, passing on viewing seasonally-themed porno flicks entitled "Miracle on 69th Street," "JIngle Balls," "Frothy the Blow-Man" and "Rudolph the Redknobbed Reindeer," and instead reading aloud from the spell book of Dr. Orpheus, the show's blatant Doctor Strange stand-in. Not comprehending the words they randomly chose to read, the boys inadvertantly summon the Krampus and he proceeds to make the rounds at the party in search of the attendee most deserving of his attentions thanks to their overwhelming wickedness. Unfortunately for him, the boys' father turns out to be the Krampus' prey and gets the birching to end all birchings, 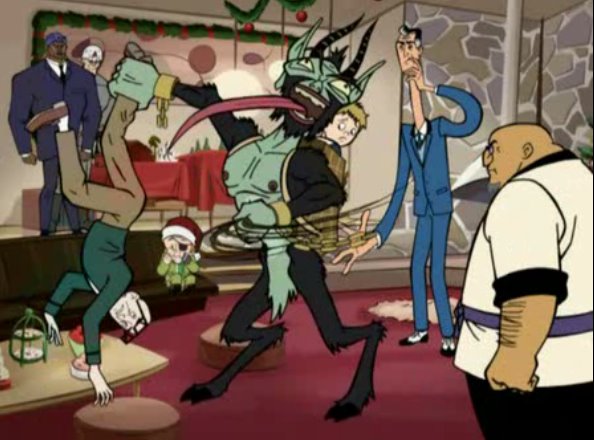 followed up by a vigourous attempted-sodomizing in front of all assembled (until ultimate badass Brock Samson shows up and engages the demon in asswhuppery). 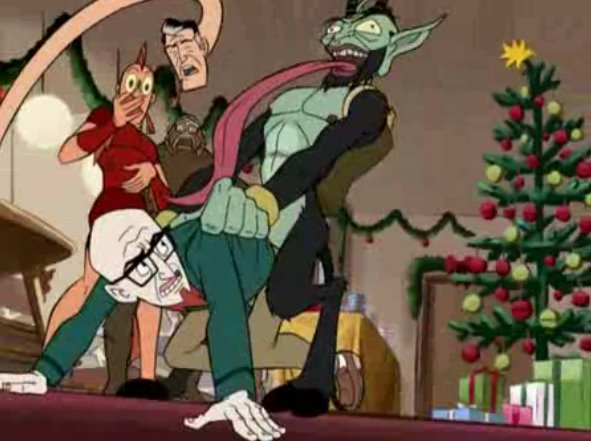 When asked just "what kind of kinky Christmas spirit" the Krampus is, Dr. Orpheus simply says "It is Germanic in origin," as though that's all one needs to know, and for me that sums him up pretty well.

So if you're of a like mind and can appreciate the seemingly-incongruous fusion of the traditional Yuletide cheer and demonic discipline, check out THE DEVIL IN DESIGN: THE KRAMPUS POSTCARDS, available through Amazon. 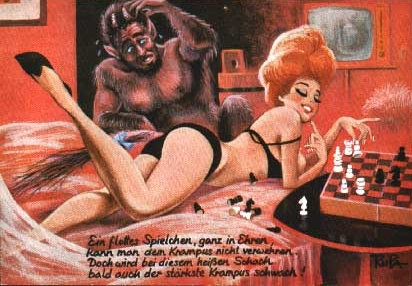 The Krampus, apparently befuddled by the chess prowess of a pulchritudinous redhead. This card is unfortunately not included in the book, but how could I not include this one? And that's definitely the Krampus and not some other random escapee from a Venom album cover, the birching switch being the dead giveaway. From the looks of things, the poor guy is pondering the possibility of doing something other than spanking those inviting buttcheeks...
Posted by Bunche (pop culture ronin) at Sunday, December 12, 2010