THE SPIDER-MAN: TURN OFF THE DARK INJURY LIST CONTINUES TO GROW 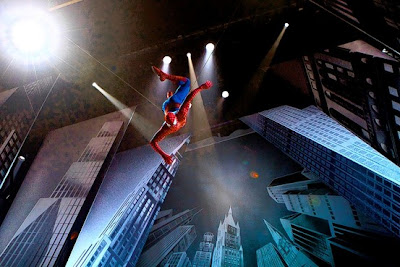 How many more actors have to get hurt before they just hang this thing up? Unbelievable. From CNN:

'Spider-Man: Turn off the Dark' performer hospitalized after fall

Reeve Carney is the actor who normally plays Spider-Man, but was not the one hurt Monday night, according to reports.

New York (CNN) -- An actor was injured after a fall during a performance of the musical "Spider-Man: Turn off the Dark" in New York on Monday night, a representative of the show said.

The New York Fire Department said the 31-year-old fell 20 to 30 feet and was alert when he was taken to a hospital.

Jonathan Dealwis, a tourist from New Zealand who was in the audience, told CNN the actor portraying Spider-Man fell "about six meters," or about 20 feet.

Reeve Carney is the actor who normally plays Spider-Man. But Carney was not the performer injured, show spokesman Jaron Caldwell said. Caldwell said nine stunt men perform Spider-Man's stunts when the character is masked, but did not confirm who the injured performer is.

Dealwis said the accident happened near the end of the show.

"Spider-Man was on a bridge, and Mary Jane was dangling from it," Dealwis said. "She drops down, as is meant to happen. Spider-Man went to the end of the bridge there. I think he was meant to sort of swoop over there, but he just fell off. ... The harness, you could see it just flick off his back and fly backward."

Afterward, Dealwis said, "it just went black, and the producer came on and said we're going to pause for a moment. You could hear Mary Jane weeping."

A producer then came by and said the show was over, Dealwis said. Some people "clapped awkwardly," and one girl "laughed mockingly," drawing "disapproving glances" from others.

Dealwis said the actor was wheeled away in a neck brace.

Rick Miramontez, another spokesman for the show, said in a statement that the actor fell from a platform, and the show was stopped.

"All signs were good as he was taken to the hospital for observation," Miramontez said.

The show, with music and lyrics by U2's Bono and The Edge, is the most expensive in Broadway history by a significant margin, but production has been beset by cast injuries and technical problems.

Monday night's performance was a preview performance -- the show is not officially open yet. Opening has been delayed repeatedly.

Caldwell declined to say whether the next scheduled performance will take place as planned.

They should wrap this monstrosity up and just cut their losses before someone gets paralyzed or killed. Enough already!