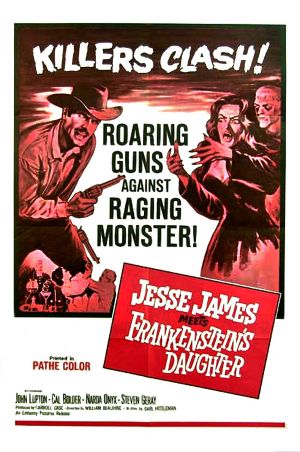 One of the many things I love about bad movies is the more often than not unintentional towering ludicrousness wielded by many films in the sub-genre. A good case in point would be 1966's JESSE JAMES MEETS FRANKENSTEIN'S DAUGHTER, a bit of camp candyfloss that's remembered these days for little other than its colossally silly title and its nonchalant fusion of horror and Western tropes. I seriously doubt a bunch of Hollywood film producers spent weeks (or even hours) brainstorming over their next sure-fire creation and settling upon a film in which the famous outlaw has it out with a descendant of of everyone's favorite crafter of man-made monsters, but nonetheless somebody figured making such a film would be a good idea so there you go.

Considering when it came out, JESSE JAMES MEETS FRANKENSTEIN'S DAUGHTER could have gone a number of ways with its game of genre-fusion, possibly having been influenced by the groundbreaking Spaghetti Westerns of Sergio Leone or the atmospherically gory and tits-a-plenty splendor of the Hammer films horror cycle, but instead the finished product reads like an even more studio-bound and artificial-looking episode of BONANZA had it been written by a staff script hack ripped on a dangerous cocktail of Percodan and Jim Beam. Directed by William "One-Shot" Beaudine — so nicknamed due to his tendency to make do with only one take of any given shot — the flick is sadly lacking in any scares whatsoever, titties, gore (although there's an "artificial" brain, but that doesn't really count), suspense or even excitement of any kind, but what it lacks in those it makes up for by being a played-totally-straight example of "camp" in that distinctly 1960's sense of the term, and being totally suitable for the kiddies dropped off at matinees when it originally played. In fact, the movie kind of has the feel of a kid's Western as filtered through the perceptions of a child suffering a high fever, something I experienced a number of times as a kid, only with films of other genres (most memorably the horrendous THE LAST DINOSAUR).

JESSE JAMES MEETS FRANKENSTEIN'S DAUGHTER is a bit of a misnomer since the titular Frankenstein is actually the good Doctor's grand-daughter, but why quibble when you have a story like this: Dr. Maria Frankenstein (Narda Onyx) and her brother Rudolph (Steven Geray) have fled Germany due to their medical experiments being too heinous even for that locale and have now set up shop in a convenient mansion somewhere in or near Mexico (the exact location is utterly beside the point), there to continue their delving into forbidden knowledge. 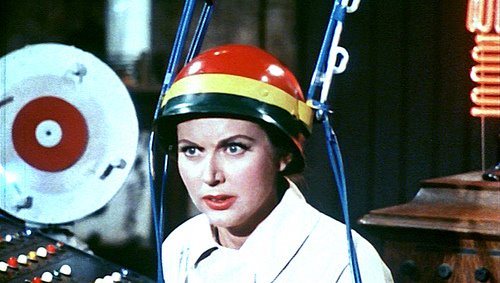 Narda Onyx as Maria Frankenstein, grand-daughter of the original slab-jockey: it takes a special caliber of actor to keep a straight face in a role — and helmet — like this one.

The pair kidnap local Mexican kids and transplant artificial brains into their crudely-trepanned craniums in hope of creating someone who'll do their bidding (exactly what their agenda is is never explained) rather than piecing together random parts of the deceased and coming up with a towering monstrosity, but each experiment is met with fatal failure for their subjects (they're actually poisoned by Rudolph in hope that his sister will think she's destined to fail, thereby abandoning her madness). Undaunted, Maria determines that what her experiment needs is a grown, muscular giant of a man, but where to find one when every single Mexican in town is either dead or has wisely left the area?

Enter famous outlaw Jesse James (John Lupton) and his hulking pal Hank Tracy (Cal Bolder), who get mixed up in a "who cares?" heist that results in Tracy getting wounded. The pursuit of timely medicalassistance leads the pair into contact with peasant girl Juanita Lopez (Estelita Rodriguez) and her parents, all of whom fled town when Juanita's little brother fell victim to the Frankenturds , and Juanita leads Jesse and Hank right to the Doctor's door, hoping to discover the truth about her brother's suspicious demise while Hank receives medical help (not a very good idea if you ask me). Finally obtaining the raw materials for her experiment, Maria devises a plan to keep Jesse out of the way while she transforms Hank into a robotic thrall of flesh and blood, renamed "Igor." Will Juanita discover the truth? Will Jesse get some more G-rated nookie from Juanita (the first round of which occurs after a tasteful TV-style fadeout)? Will Maria have her revenge on Jesse after being spurned by him in favor of Juanita's south-of-the-border sexiness? Will Hank ever wear a shirt again? Will a jealous former-outlaw and the local sheriff nab Jesse and turn him into a human pinata? 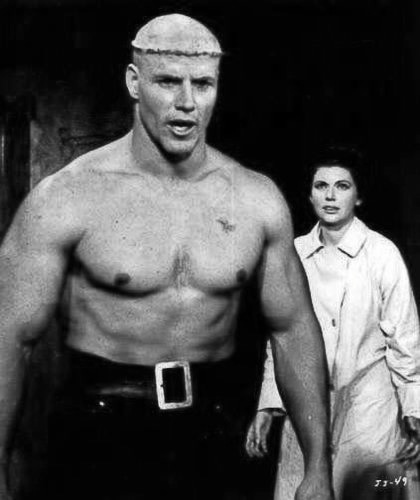 Hank (Cal Bolder), post-insertion of artificial brain and renamed "Igor" for no apparent reason (no, seriously), as the Doctor checks out his impressive pecs.

The answers to all this (and less) will be had by the time the words "The End" magically appear onscreen, but it's a decent enough waste of time getting to that point. Yeah, it's pretty much "baby's first horror movie," but it's harmless fun that will definitely hold your interest if you've ever sat through any of the legion of TV Westerns unleashed on the airwaves between 1955 and 1970. The acting is about standard for something of this ilk, but special props must be given to Onyx and Rodriguez, both providing over-the-top performances that team up to create an unintentional "Battle of the Ridiculous Accents." My only real complaint here is that there's no decent '60's-eraHammeresque red stuff to be had, because it would have been awesome to see Hank in full-on-Frankenstein mode crush Rudolph until at least some amount of blood spewed out of his mouth, ears or eyes, accompanied by the sound of bones crunching beneath the onslaught of Hank/Igor's muscles. 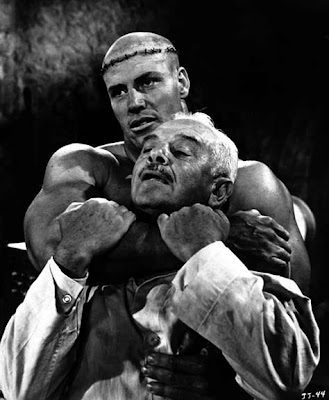 Oh, what Hammer studios could have done with this...

But whatever. If this turns up on American Movie Classics or Turner Classic Movies, or even your local TV station at Jesus O'Clock in the morning, give it a look just so you can say you've actually seen a movie with a title this stupid.
Posted by Bunche (pop culture ronin) at Wednesday, January 21, 2009

I think if you've grown up in the NYC Metropolitan area, you've probably either seen this or run across it more than once.

It's a shame local stations suck now... I blame Cable and infomercials...