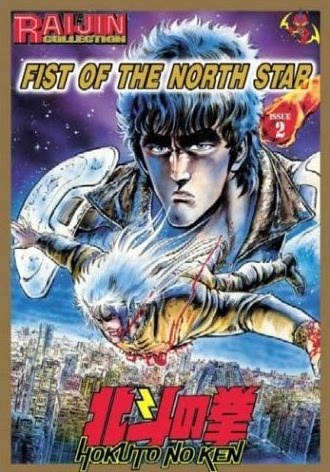 How not to do a cover illustration: depict the dying villain committing suicide on the fucking cover, thereby totally blowing the "twist" ending of the story arc.

It's FIST OF THE NORTH STAR Friday and here we go with a review of MASTER EDITION VOL. 2!

Picking up from where the previous book left off, Kenshiro's quest to rescue his kidnapped fiancee, Yuria, and attain vengeance against his former friend, Shin, ends with Shin's complete and utter defeat and Ken's hope of a reunion with his bride-to-be shattered in an unexpected manner. Shin's fate makes him the first of several Nanto Seiken warriors whose paths cross with Kenshiro's, always with tragic and bloody results, and Shin is by far the least interesting of the lot, so his passing from the narrative is no big loss.

When the next arc begins, Kenshiro is given a far more entertaining challenge in the form of the highly skilled soldiers of GOLAN (short for "God's Land"), a group of intense and murderous military elite who seek to establish themselves as the salvation of post-nuke humanity and come to Ken's attention when they kidnap random females from a village for use as unwilling breeding stock. 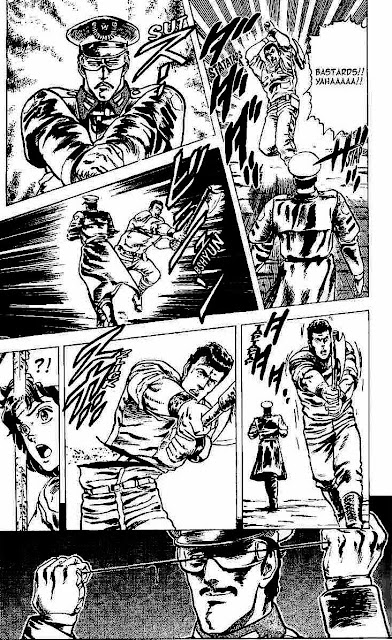 A GOLAN soldier murders a little girl's father right in front of her. That kind of shit basically ensures a visit from Kenshiro...

Among the hapless females is Lynn, a girl of perhaps ten or eleven years old, who has been one of Ken's annoying juvenile sidekicks since the series' first installment (along with young teen thief Bat, both of whom are the only constant fixtures in the series other than the hero), so Kenshiro goes to the GOLAN stronghold to retrieve Lynn and kick the motherfucking shit out of the fascist survivalists, but not before rendering several GOLAN members bereft of life on the wasteland floor. 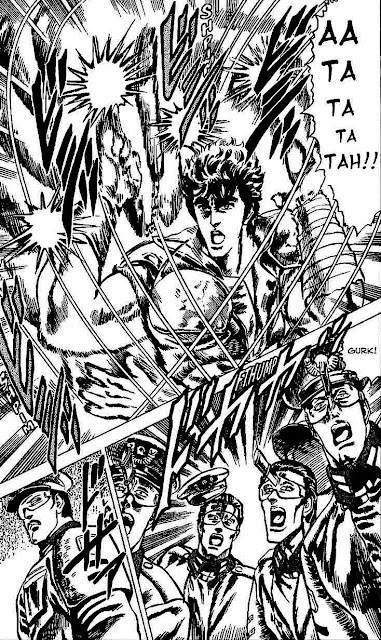 One of the rare instances of Ken utilizing weapons. This was early in his career so he had not yet attained the "god of combat" level of badassery that would come after a couple more story arcs, so I'll let it slide.

But while Ken is ready to single-handedly take on the hordes of skilled and vicious commandos, what Ken doesn't expect is their sadistic one-eyed leader, the Colonel, whose martial prowess is paired with impressive psychic abilities. 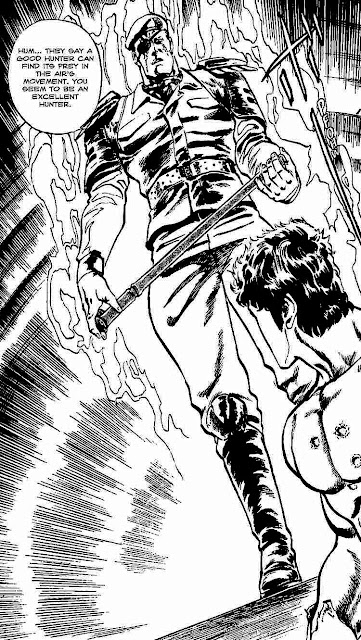 Kenshiro meets the Colonel, an early foe worthy of his martial talents.

And up to this point we knew nothing of exactly how the world met its nuclear-assaulted fate, but that piece of info is kindly provided to Kenshiro (and us) when the Colonel relates how the drunken tycoons, military officials and heads of state set off WWIII as what amounts to a display of macho dick-waving. 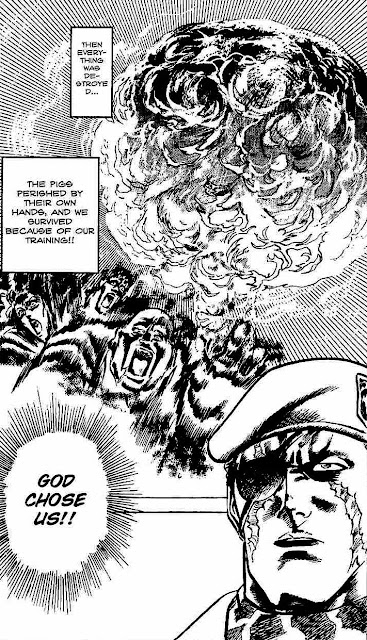 The Colonel schools Ken (and us) on some history.

When he and his elite Red Beret soldiers survived the holocaust thanks to their training, the Colonel is convinced their survival was ordained by God, and so GOLAN was born. When the bombs fell, mankind was so fucked-up that even accurate accountings of the date were lost, so all that's known is that the earth was devastated in the year "199X" (the series started in 1983, so the '90's were still a ways off) and it was up to GOLAN to take the reins of humanity (at least in the Colonel's opinion). That's all well and good but the concrete reasons for the pushing of "The Button" are afforded surprisingly short shrift, giving us the Colonel's possibly warped point of view on the events leading up to the rain of warheads. Whatever the case, if memory of the entire series, even the untranslated parts, serves me, I don't think the subject is ever broached again. Oh, well. Explaining WWIII's only a minor plot detail that would only get in the way of the opera of manly histrionics and kung fu action, so why bother with it?

The GOLAN arc is easily my favorite of the early period FIST OF THE NORTH STAR — meaning the stuff before the introduction of Nanto Seiken anti-hero Rei and Ken's older brothers — and is in every way a perfect and exciting "lad's" comic. Filled with fast-paced, ultra-violent martial arts action from start to finish, the gauntlet of badasses Kenshiro has to face is in my opinion far more frightening than the over-the-top and ludicrous forces in Shin's army. GOLAN's military angle roots them more firmly in reality than just about any other villains in the entire series, even with the Colonel's genuine superpowers taken into account, and Ken's battles with the GOLAN forces are truly spectacular. 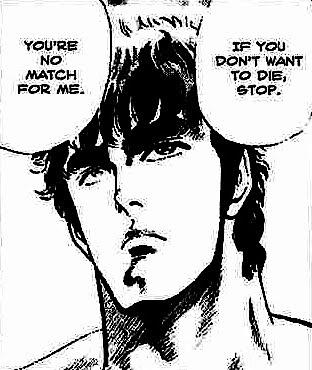 Ken trash-talks the legion of GOLAN... 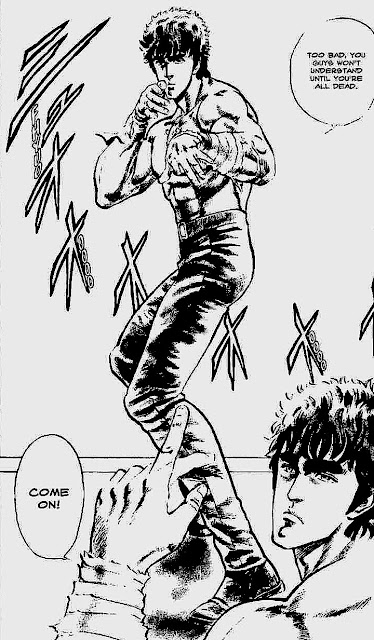 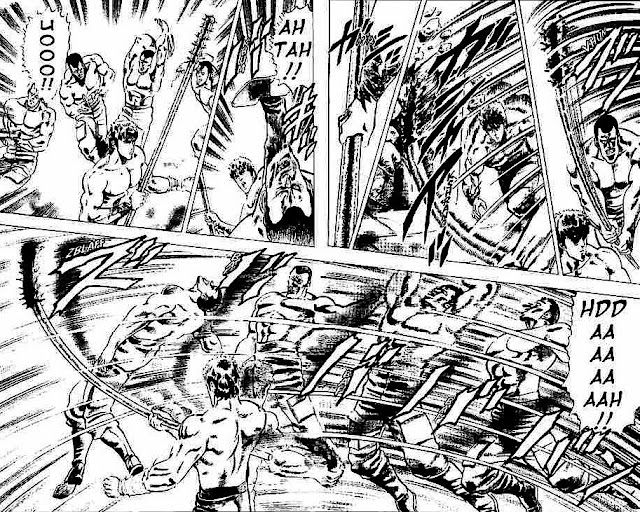 ...and brings the muthafuckin' pain!!!

Remember the sequence in ENTER THE DRAGON where Bruce Lee battles his way through Han's underground catacombs, taking on a legion of opponents with his limbs and assorted weapons that happened to be lying around? The GOLAN arc is FIST OF THE NORTH STAR's nod to that sequence and it impresses thanks to Ken really getting to flex his skills in a torrent of blistering melee combat against seasoned professionals, rather than a pack of what appear to be feather boa-wearing Christopher Street drag queens on steroids. Plus, this sequence shows artist Tetsuo Hara beginning to hit his stride as an illustrator of creative mayhem, a talent that would grow exponentially with each arc. His work even impresses when there's no fighting going on, allowing each of the story's locations to fairly drip with atmosphere that places the reader firmly within Kenshiro's violent world. 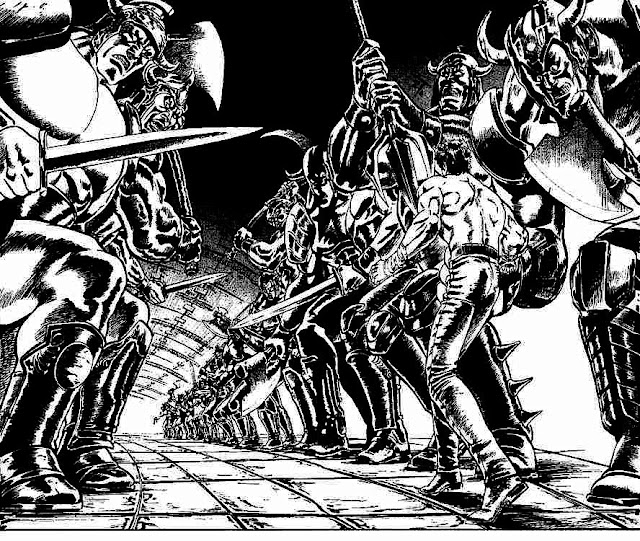 Kenshiro stalks the Colonel through the halls of the GOLAN citadel: an early and impressive example of artist Tetsuo Hara's flowering cartooning skills.

Following the total destruction of GOLAN the next arc kicks off with the obnoxious villain Jackal, an uninspired baddie who quickly wears out his welcome and wastes narrative time, but more on that in the review of the next volume. Had the conclusion of the Shin storyline and the beginning of the Jackal arc been excised, the GOLAN arc would have made for a great stand alone adventure, and if it ever gets reprinted in English I suggest that the publishers give it its own volume. 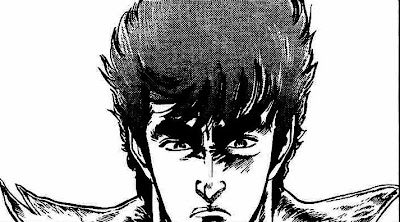 I thought the master edition was in color.