ELEGY FOR A GRANDMASTER (and a related, unexpected gift from the Time Tunnel) 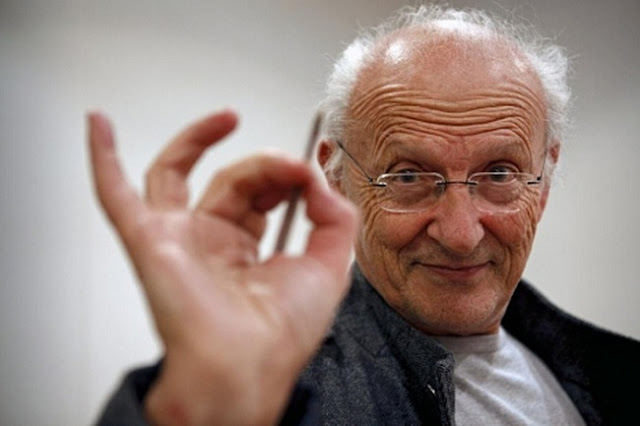 As the comics fans who read this site are no doubt aware of by now, the legendary Jean Giraud, best known to the world as the one and only Moebius, recently lost his battle with cancer at the age of 73. This lovely Frenchman was one of the world's true grandmasters of comics illustration, possessed of skillfully applied draftsmanship that seemingly impossibly matched his vast and vivid imagination's infinite landscape, and he has been a major influence on my sensibilities since I discovered him when I was just a month or two shy of turning twelve. How to describe this man's...no, this titan's oeuvre and its meaning to those unfamiliar with his body of work? It's for more legitimate journalistic organs like THE NEW YORK TIMES to pen his obituary, but I was — and remain — a staunch fan, so I'll try to give it a shot.

Patty Smith: her image used as photo reference in THE AIRTIGHT GARAGE.

Moebius' name ranks among the all-time greatest and most influential visual storytellers of the last hundred years, a pantheon of such comics deities as Kirby, Eisner, Tezuka, Hergé, Foster and Caniff, each of whom birthed recognizable visions that were truly and uniquely their own. When you read a Moebius work, you don't just read it. One is immediately drawn in by visuals whose apparent simplicity of line created worlds that had weight, depth, color and a certain dreamlike/lysergic atmosphere. His figures, human or otherwise, all bore a near-palpable fleshiness and weight that one would think impossible to achieve with such a relative economy of linework, and that aspect was key to the believability of his vast dreamscapes. The structures and technological wonders he drew displayed an elegance to match his characters, and all of it dazzled the eye. 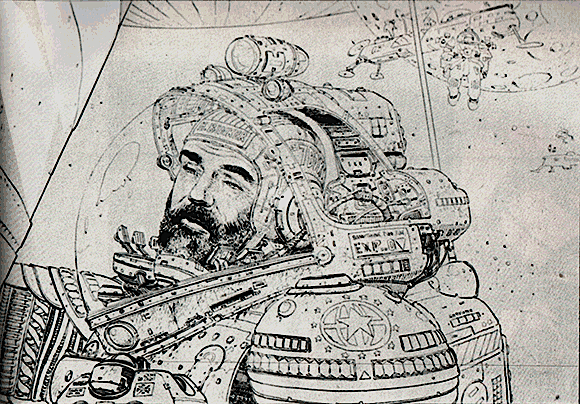 One of Moebius' designs for Ridley Scott's ALIEN (1979). Watch the film again and note the space helmets. 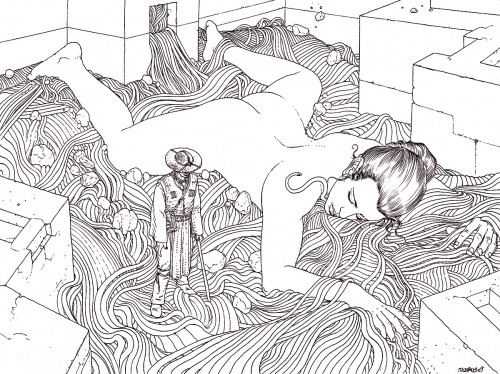 Note the simplicity of line that works to somehow provide a depth of detail that no amount of pointless art-wankery noodling would have achieved without rendering the piece murky or confusing with superfluous minutia.

Discovering his work as an adolescent male was a serious eye-opener when it came to redefining how I considered what is often defined as "good girl art." My tastes in depiction of the female form have always run toward the Frazetta and Corben schools of buxomness, coupled with an earthy torridness of a kind that made one feel they could practically smell and taste the fantasy females in question. (Corben's bosomy women especially got me going and I always had it in my head that their presumed soft and lush expanses had a sweaty, salty flavor to them.) But then came Moebius and his classy visual sensibility that delineated delicate, sleepy-eyed, very European-looking women whose physical attributes somehow managed to combine the expected elements of sexual fantasy with a more realistic approach to the form and depiction of its many pleasures, both as art and erotica. When his females were seen engaging in the act of sexual congress, there was always an air of classiness to their cavorting and a definite sense of joy in the sharing of bodies in that most intimate form of communication. Once I was of an age to have experienced such things for myself, my appreciation for Moebius only increased because I recognized the erotic being expressed by someone who had not only enjoyed the pleasures of the flesh, he positively reveled in them as a vital force. Even when applying his skills to what would in lesser hands be considered "beaver shots," Moebius' women maintained a distinct cosmopolitan dignity. 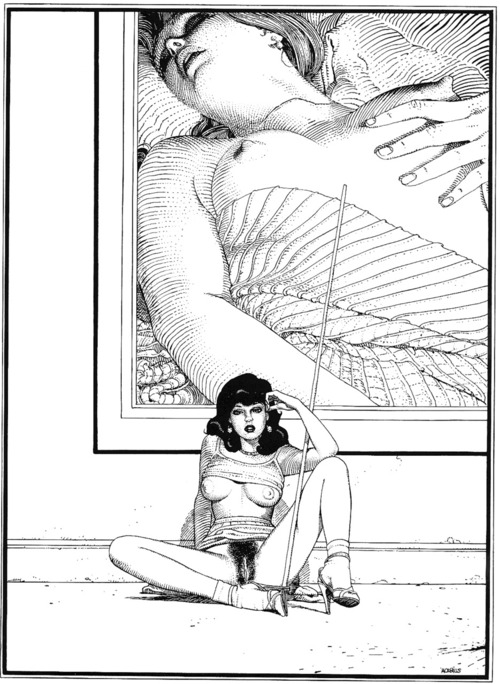 I fail to find anything even remotely vulgar about this.

That aspect shook me as a desperate tween and was further driven home while reading the recent collected edition of his MADWOMAN OF THE SACRED HEART, which contained some moments that one wants to have within reach on lonely nights. 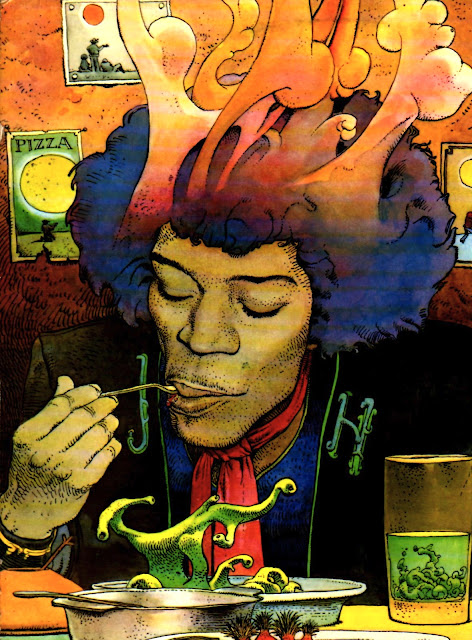 Moebius and Jimi Hendrix: a lysergic gene-splicing that simply had to happen.

I have no idea if Moebius ever availed himself to the renowned psychedelic "party favors" that were obtainable in the 1960's and 1970's but one of the things that most appeals about his work and the fantasmagoria it brings to vivid life is its quality of hallucinatory malleability and colorfulness, which also paradoxically works even in monochrome. His fantasy landscapes could be splashed with colors you just knew tasted like sweet citrusy candy, or they would veer toward cool pastels that evoked a certain velvet feel, and his black and white pieces' lack of hues only served to bring the deceptively minimalist surface details and textures into sharp focus. Many a young stoner or dabbler in quality hallucinogens seasoned their altered journeys with the artist's works and one can imagine those febrile visuals serving as a diversion that blew 3D movie imagery right out of the water. 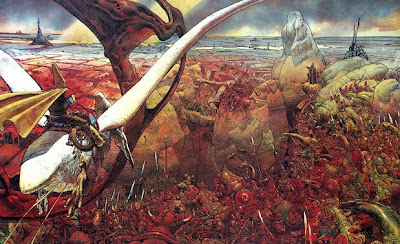 A famous image from ARZACH, a visually influential series going on four decades old whose impact is still being felt.

To those of us who followed his career beginning with the U.S. debut of HEAVY METAL magazine, it seemed there was nothing Moebius was not capable of. In his hands, even a garden variety Marvel superhero could be lent his signature style and otherworldly aspect. 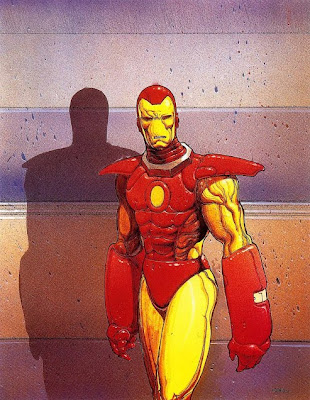 This 1989 Iron Man poster hung framed in the Marvel Bullpen for ages and seeing it among far lesser works every day during my time there (January 1990-late October 1998) only made me appreciate it more.

But all of the greats must eventually pass and Moebius' time is finally over. His imagination and capacity to express that seemingly limitless wellspring were indeed moving and powerful, but even his powers could not hold the dire end that is the body consuming itself at bay. I openly wept upon reading of his demise and I think it's clear from my ramblings that I held the work of Jean Giraud most dear. To put it simply, perhaps more than any other illustrator, he truly made me believe the impossible.

And then came an unexpected miracle gift from the Time Tunnel. (Note: THE TIME TUNNEL was an old sci-fi show about time travel, and I often invoke it when things I'd long forgotten about return as if from out of the blue.) 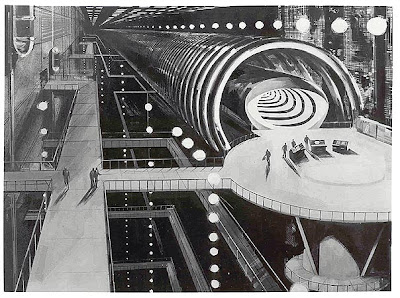 The Time Tunnel: a classic piece of sci-fi hardware, now re-purposed at random spots in my apartment.

Over the days since his passing was announced, there has been much outpouring of grief and tributes by some of today's most talented cartoonists have begun to surface, with more inevitably to come. (Worth seeking out are the ones by Chris Weston and Goran Parlov. They're gorgeous and clearly bear the mark of his influence upon their work.) I've spoken with a number of fellow Moebius-lovers about his demise and we reminisced about the many, many stories of his that moved and inspired us, but of particular importance was the conversation I had last night with my dear friend and Bullpen brother, Big Black Paul. As Paul and I chatted, he began to recount the day when Moebius came to visit the Marvel Comics office, a time we both thought occurred before I started working there. But as Paul discussed Moebius' translator noting the Lt. Blueberry poster that the big guy had hanging on the wall next to his desk — to call paul a maven of westerns would be a colossal understatement — and asking him if he wanted the artist to sign it, a bell began to go off in the back of my memory. When Paul mentioned an officemate who had a desk near his station, an officemate who did not join the staff until at least a year after I arrived, I recalled that I was there on the day of Moebius' visit and that if I had advance word that he would be visiting the House of Ideas, there was no way in hell that I would not have had my copy of his THE AIRTIGHT GARAGE, my favorite of all his classic works, on hand for him to sign. Once that memory fully processed, I launched myself toward one of my bookcases...

One of the problems with being the sort of longtime collector that I am is that occasionally I forget exactly what resides in the bookcases and many boxes (some unopened for years) that occupy my flat. (It also doesn't help that there was a period between 1990-1996 when I was perpetually in a state of weed and/or beer and tequila-fueled self-medication, so the memories of those days vary in their clarity. I'm not proud of it but there it is.) However, I did know where my two favorite Moebius books — the aforementioned THE AIRTIGHT GARAGE and THE HORNY GOOF — resided, neither of which I had cracked open in a very long time. I had sold off all my other Moebius books during various lean times over the past two decades but the two that remain will stay with me until I'm tits-up dead, so I was immediately able to find THE AIRTIGHT GARAGE. I pulled it from its place on the shelf... 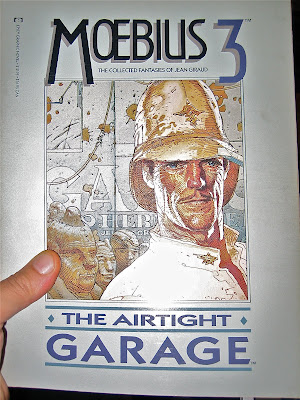 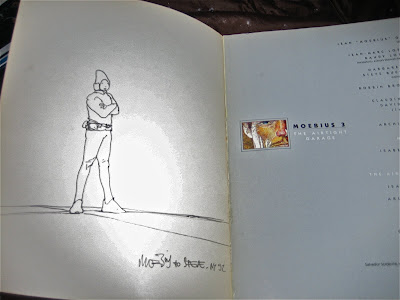 ...this hand-drawn treasure that was signed by Moebius himself to l'il ole me. 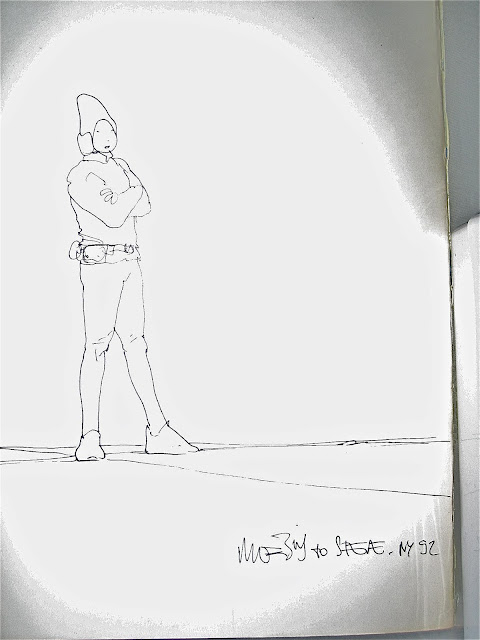 I'd been having an appalling week for a number of reasons, but finding this gift from out of the Time Tunnel erased all of the negative energy of the past few days. I swear I almost fainted from joy upon rediscovering this, and I promise I'll get it scanned for posterity as soon as I can manage it! See what I mean about believing the impossible?
Posted by Bunche (pop culture ronin) at Wednesday, March 14, 2012

Labels: GEEKIN' OUT, THE BOOK OF THE POP CULTURE DEAD

I had been expecting his psychedelic work to have been fueled by more than his sober imagination but I think among artists, it's considered more unusual if you don't dabble in the recreational highs. I haven't seen any confirmation that Moebius did or didn't though.