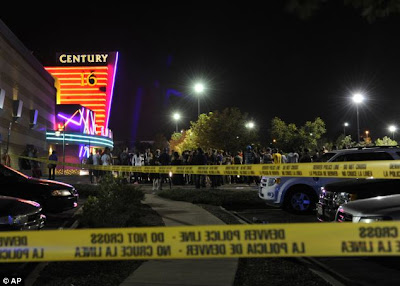 This is all over the news and the rather sketchy details are slowly coming out, but here's the skinny thus far:
In what has to be the most bizarre/horrifying opening night ever for a summer blockbuster film, a midnight screening of THE DARK KNIGHT RISES in Aurora, Colorado was reportedly interrupted when smoke bomb canisters were released in a shopping mall theater's auditorium. As the audience was dealing with that, shooting started and as of the most current news reports, there is a confirmed death toll of fourteen, with as many as 20-50 people injured. The shooter was reported to be wearing a gas mask when the shooting commenced, and the unidentified suspect is now in police custody. Those are the currently available basics, but check with your new source of choice for more details as the story develops.
I don't know about you, but this incident disturbs the shit out of me. Why in hell do people decide to suddenly attack what amounts to a captive group of innocent people, with at least a few outright deaths guaranteed? I'm chilled to the soul whenever I hear of this kind of thing and this particular massacre really hits home with me because of its context. That audience simply went to see the new Batman movie and have a good time, and now fourteen unsuspecting people are dead. I don't know how to process stuff like this and though I'm rather a misanthrope at times, I would never wish anything as violently senseless upon anyone.
To the victims, requiescat en pace.
Posted by Bunche (pop culture ronin) at Friday, July 20, 2012

I'm really not sure what to make of this and I fear anything I say in order to try an express that will come out badly and be misunderstood. It certainly won't be helped by my very dry, sarcastic and somewhat dark wit.

I know I'm seeing a lot of hand wringing and kumbaya type solidarity post from all corners of fandom on-line. Some are even trying to come up with ways to raise money for the victims. The news/media outlets seem to be doing a lot of talking (and some blaming) without knowing (typical) what it is they are talking about while the politicians try to out empathy their opposition. It all just seems so false and self important. Like they are all trying to attach themselves to some bigger event that they really aren't apart of. Especially those in fandom. A dear friend of mine, the one who was first to tell me about this happening as a matter of fact, said that she felt as if the community of fandom was attacked last night. As much as I love and respect her, I'm just not sure what to make of that. I'm not sure that I understand what she means and as it stands, I don't think I can agree with it. She tried her best to explain it but to no avail. Heck, she has been in her own words "pretty much worthless at work today because of what happened." This is a lady the works in management at a major airline and did so in operation during the attacks of September 11. I know she can handle stress and function when stuff falling apart around her but this is personal to her in a way I don't understand and she can't explain.

To be quite honest Sir Bunche, yours is the first post about this sad, senseless event that I've read on-line that hasn't caused me to roll my eyes or scoff in derision at the writer.

It moments like this that really cause to wish that you and I could sit down with a beer at some halfway decent bar and talk some things through. Maybe you can help me to see and to better understand what's going on with everyone. Well, everyone it seems but me.

To everyone else reading this, I am sorry if I seem a heartless @$$hole. I'm really not but you will have to take my word on it.