IT WAS TWENTY YEARS AGO TODAY... 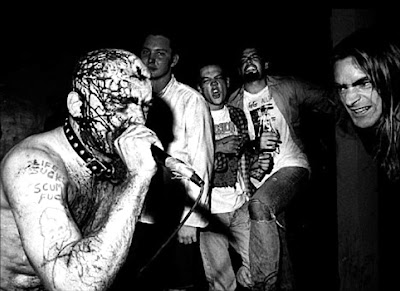 The "Quiet Storm" croons for the bobbysoxers.

Today marks the twentieth anniversary of when celebrated poet laureate and modern day troubadour GG Allin went gentle into that good night and passed away at the too-young age of thirty-six. This socially-concerned, responsible, and deeply-sensitive individual's flame of self-expression and creativity burned bright as a thousand suns going super-nova as he carved out a visceral niche in rock 'n' roll history that flash-in-the-pan wannabes such as the Beatles, Jimi Hendrix, Led Zeppelin, and Janice Joplin strove toward and utterly failed to achieve. 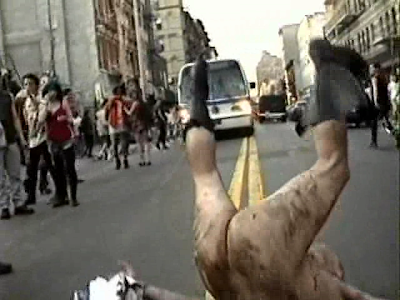 Still creating mere hours before his death: Allin's interpretive dance to summer in the middle of the street on Manhattan's Lower East Side, clearly inspired by Elizabeth Swados's groundbreaking 1978 Broadway musical RUNAWAYS.

When this singular talent was forever silenced by death's inexorable scythe, oh, how we wept on that dire day, for we knew that one such as he was unlikely ever to pass this way again. We wept for our own sense of deep, tragic loss, while also shedding anguished tears for the youth of the future who would never know the firsthand influence of such a humble and caring exemplar of be-yourself, down-home Americanism. It would be fair to say that the nation had not been so united by an outpouring of shock and grief since that grim day in 1963 when John F. Kennedy met his fate and the entire world seemed to stand still.

While looking back on the illustrious career of this musical wunderkind, it was indeed difficult to choose one song that would best sum up his indelible contribution to the arts and society, so I opted for this lesser-known piece which allows the deceased to sum himself up in his own poignant words. Rest well, Jesus Christ "GG" Allin, and take some comfort in knowing that in your wake came the likes of Kelly Clarkson, One Direction, and Justin Bieber, all of whom owe you an unrepayable debt of influence.

Labels: SOUND and FURY, THE BOOK OF THE POP CULTURE DEAD — ADDENDUM