Last night I had dinner with two dear old friends whom I have known since high school and with whom I shared many questionable adventures during our over three decades of association. One of them, a skilled martial artist of several disciplines who calls himself "the samurai house pup," has recently returned from hardcore stick and knife-fighting training in the Philippines, bringing usual gifts as he as he has been known to do since his first trip to Asia back in the mid-1980's. I greatly appreciate weird and unusual stuff with which to stock my collection's shelves, and he never fails to bring the strange and unique.

This time he handed me this odd, hornlike object that upon closer examination was some kind of sheath. There was a horseshoe-shaped piece of metal protruding from the sheath, which was held very firmly in place by an attached tether that tightly wound around the sheath several times t be finally held in immovable check by a couple of tight metal clasps. 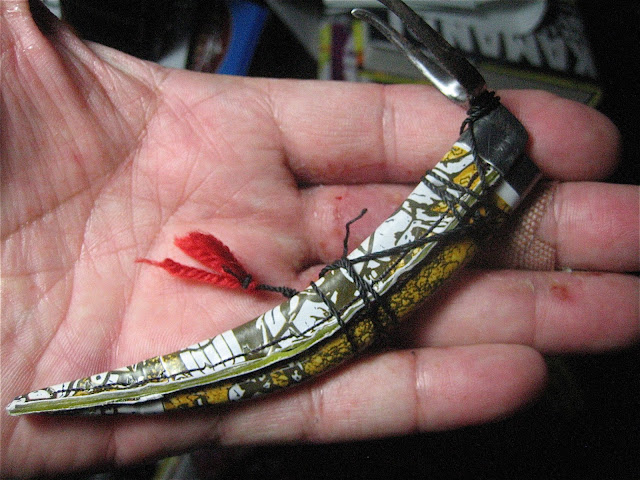 I was instructed to unwind the tether but, in a very smart move, my friend told me what the item in the sheath was before I took it out. Inside the sheath was an actual spur/blade that one would tightly tie around the leg of one's fighting cockerel, if one were to own such a bird for the purpose of cockfighting. (NOTE: That is a sport that neither I nor Samurai House Pup advocate, so don't get in a tizzy.)

The reveal of what the object was was immediately accompanied by both of my friends stating with much gravitas that it was literally "as sharp as a razor. All of us have trained with assorted martial arts weapons since our teens, so the understanding of the item's potential lethality needed no further caveat. 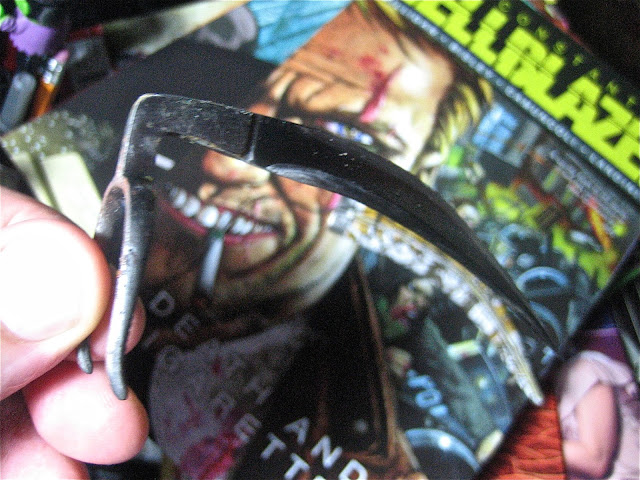 I waited until I got home to fully examine the double-bladed talon and I'm very glad I did. Upon close examination, I can unequivocally state that this thing is hands down the single sharpest item in my possession. When you can say that with absolute certainty when you own a very sharp Santoku bocho Japanese kitchen knife, you know you have something extremely dangerous, so it simply cannot just be left laying about. 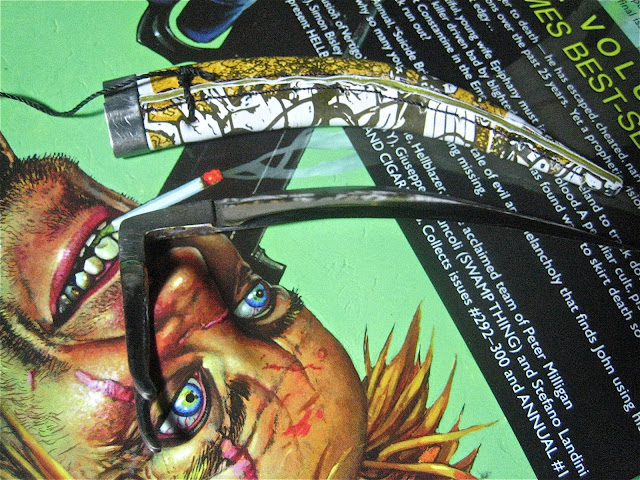 Suitably impressed by this beautiful/horrifying implement of lethal barnyard fowl augmentation, I returned it to its sheath, once again wrapped it tight, and placed it behind the glass on a shelf in my cabinet of tomes, tchothkes, and items of esoteric interest. I love the item in question, both for its rough-hewn danger factor and for its fusion of aesthetic appeal and likely illegality if carried in the Big Apple, but keeping it out of the way and behind the glass, only to be taken out and handled only by myself or other individuals who know and understand the importance of handling hazardous items with respect and caution. And, again, this thing is sharper than a motherfucker.

I'm not a fan of bladed weapons in general, but this is unique and of considerable interest, so I'm rather stoked!
Posted by Bunche (pop culture ronin) at Thursday, September 19, 2013