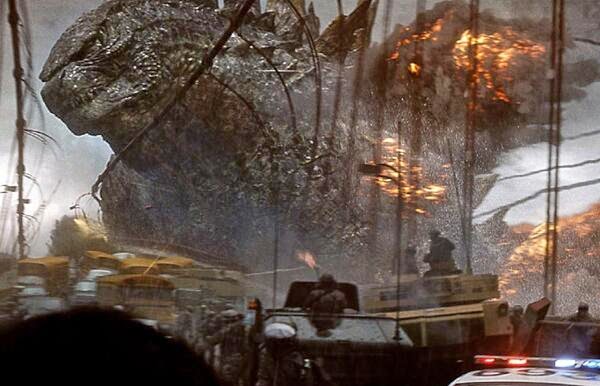 I'll just cut right to the chase: I wanted to wanted to love the just-unleashed American Godzilla movie. I really did. But while it is not a bad movie, per se, I found it to be profoundly underwhelming. I'm not even going to bother with describing the plot in detail because it simply just wasn't all that, so here's what you need to know:
But the thing that most irked me about the film is that Godzilla himself is almost beside the point. He has relatively little screen time and while what we get is spectacular, it's mostly a case of too little too late and a lack of badassed giant monster action that really rouses the audience. (Which is not to say there weren't cheers when Godzilla was finally revealed in full and when he roared in triumph after exterminating the MUTOs with extreme prejudice.) And when we do get Godzilla in action, his first set-to against a MUTO begins as one would expect but immediately shifts to being covered silently and briefly as seen in a TV news broadcast. Following that, the big two-against-one battle in Honolulu kicks off but is swiftly brought to an abrupt halt when we get a POV shot from the perspective of people fleeing into a fortified shelter as the doors close and cut off the action. The scene then shifts to the efforts of the uninteresting soldier's efforts and sporadically returns to Godzilla's too-brief battle with the MUTOs, which actually has the nerve to crib one of Godzilla's finishing moves from the grand-daddy of all giant monster movies, the original KING KONG (1933). When all was said and done and Godzilla made his way back into the sea, I was left with the feeling of having been on the receiving end of half of an unfinished handjob. The film's too-few monster moments are impressive while they last and almost get the audience to where it wants to go, but at the most crucial moment the action is derailed and the recipient is denied the giant monster movie's equivalent of a truly satisfying, spunk-a-flyin' orgasm.


GODZILLA is worth seeing if you're a giant monster hardcore and there are certainly other fans of Big G who will give the film a more enthusiastic pass than I did, but I say caveat emptor. My love of Godzilla has been borderline-religious since I was five years old but I am not one of those fans who willingly turns a blind eye to even the most redolent cinematic turd because it happens to feature their favorite monster. I have absolutely seen worse Godzilla movies but, thanks to it mostly being the kaiju movie analog to a high school cock-tease, I assure you that I won't be returning to this film for repeat viewings. All it did was make me want to sit through a few of the old school Godzilla films yet again — or, for that matter, the vastly superior PACIFIC RIM — and I'm saddened to say that that desire ignited while watching the new movie. When you're sitting through a brand-new big-budgeted installment in a six-decade franchise and all you can think about is how much more fun it would be to see some of the previous entries containing the likes of Mothra, Akira Takarade, Kumi Mizuno, and King Ghidorah, that does not say much for what's currently unspooling onscreen.
Posted by Bunche (pop culture ronin) at Saturday, May 17, 2014