I finally got around to scanning several autographed photos that I'd been meaning to post for ages, so here they are:

While not an autographed item, this roster of programming from a drive-in in 1975 shows a healthy mix of Hollywood hits, low-budget schlock, and exploitation sleazery. CAGED VIRGINS was a dubbed French import that played under numerous titles and with various edits but it is infamous for its most uncut version, which features nubile naked women being whipped and molested in a moodily-lit dungeon, complete with a bat hanging from the Euro-bush of one of said lovelies. 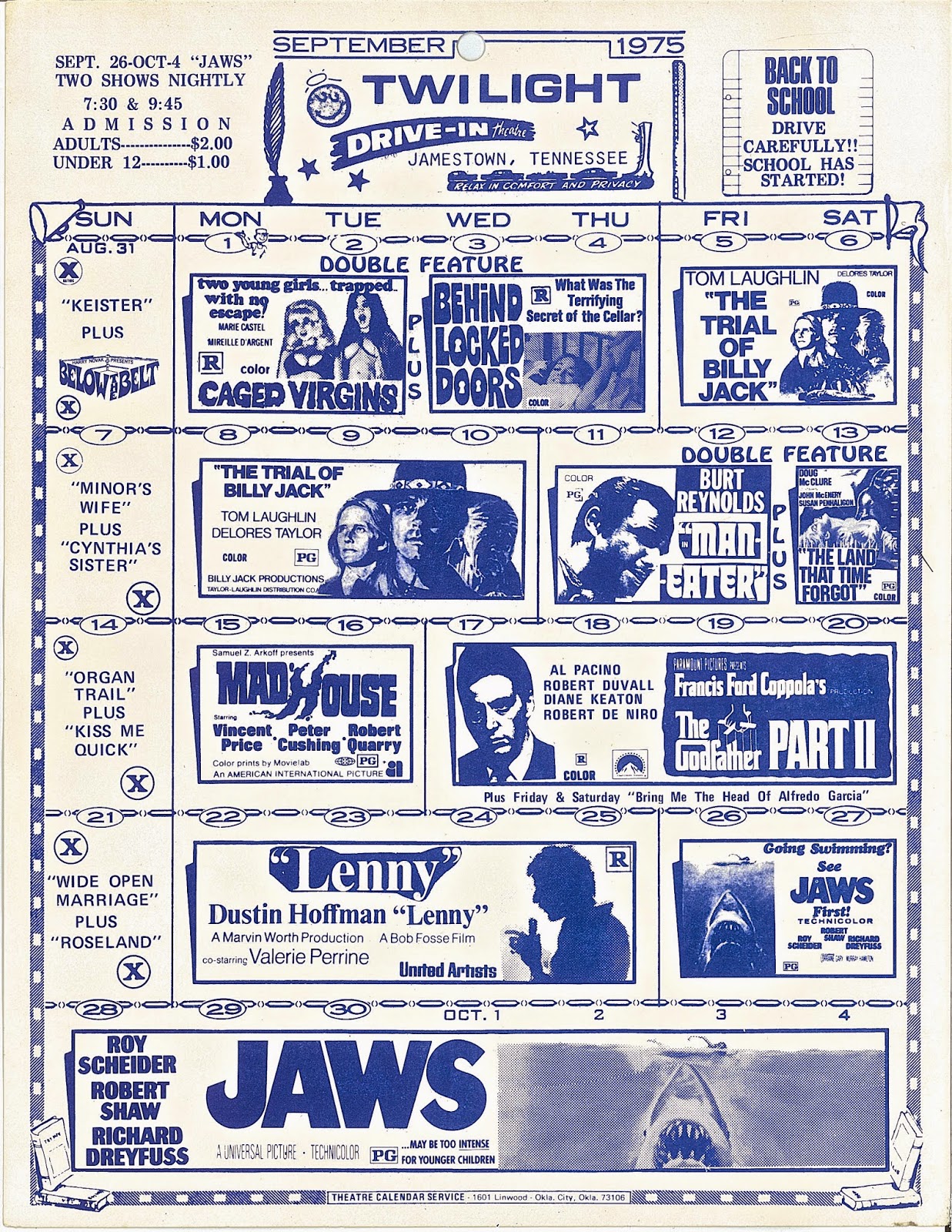 Next is a publicity shot of the original Slymenstra Hymen from the intentionally-ludicrous metal band Gwar. They came to visit Marvel during my days in the Bullpen and they were all nice enough to sign stuff for the staff's many metalheads. Sweet folks. 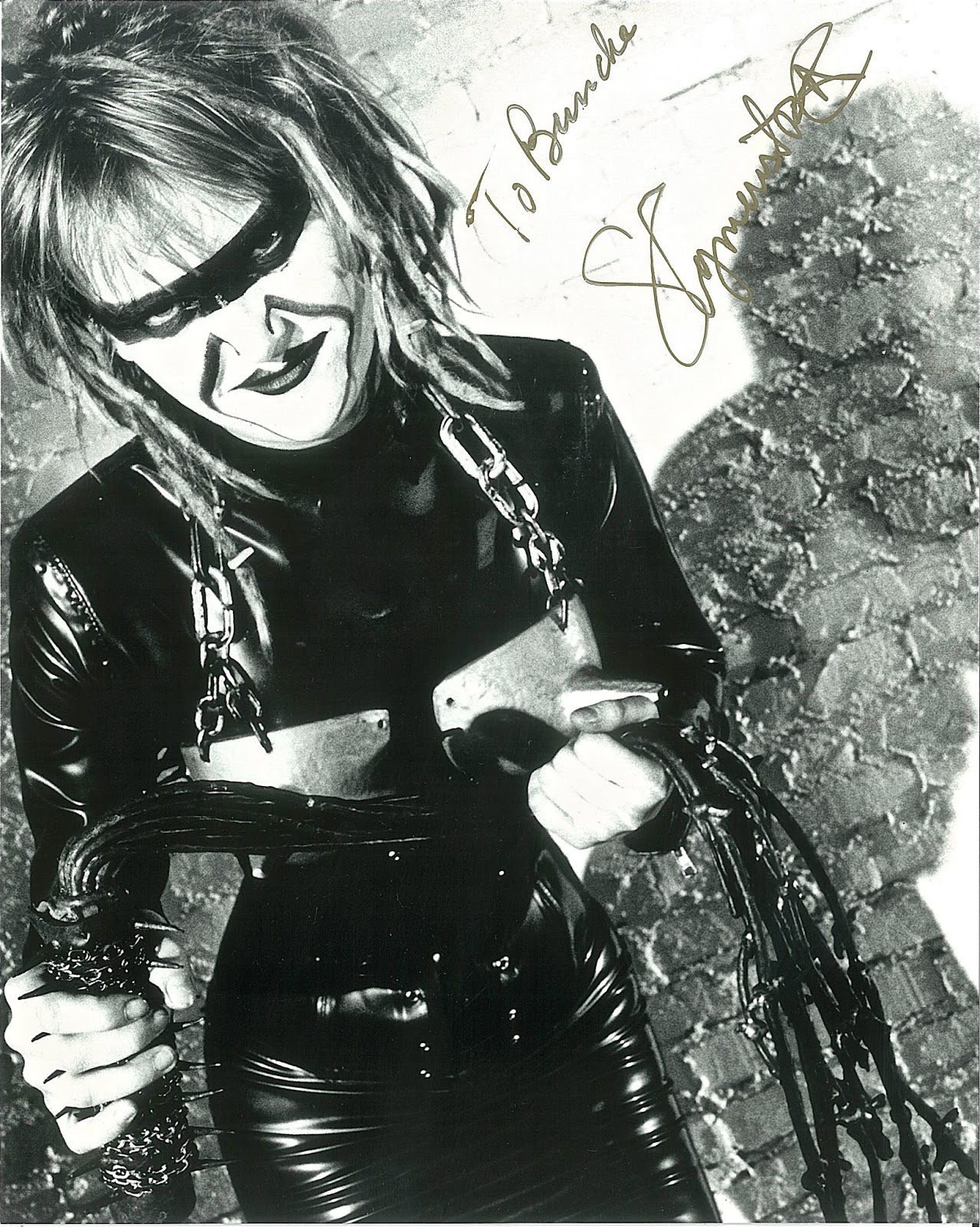 During my days at the barbecue joint, I used to arrive at work on Saturdays a little early so I could get a head start on the cooking and have things ready to roll by the time GHOUL A GO-GO came on. GHOUL A GO-GO is a public access throwback kid's show that harks back to the bygone and totally fun days of regional horror hosts and the wacky shenanigans they got up to while showcasing vintage horror movies. GHOUL A-GO-GO is only a half hour per show so there's no time for features, but each installment is crammed with short films, live music by wacko bands, a weekly dance party for kids in the studio (with some of the kids occasionally being hauled away to fates too terrible to fathom), and the antics of the show's hosts, stylish revenant Vlad Tepes and hulking, groovy hunchback Creighton. I watched the show regularly for years and came to love it, so imagine my shock when I attended my friend Heather's birthday party a few years back and saw Creighton (out of makeup and costume) stroll in and join us at the party's dinner table. In real ife his name is Kevin and he's a total sweetheart who shares numerous interests in common with Yer Bunche, so it was an instant connection. We've been friends ever since and I go to see the GHOUL A GO-GO live shows whenever possible, which is where I obtained this promo item. 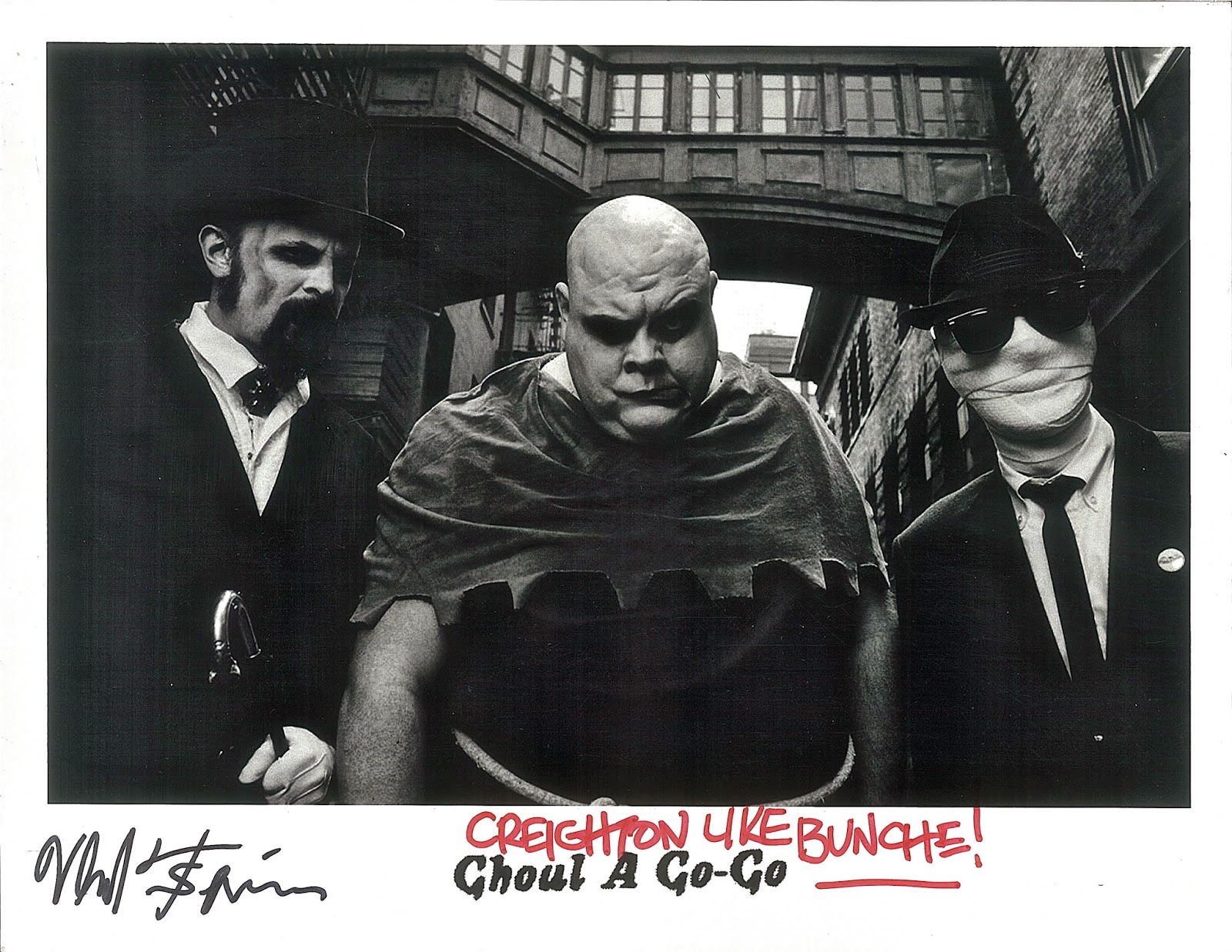 Th Creature from the Black Lagoon is one of my all-time favorite movie monsters and is perhaps the iconic cinematic monster of 1950's American cinema, so how could I not want an autographed shot of Ricou Browning, the man inside the suit? I have two of them, thanks to one of them being obtained as a surprise gift. 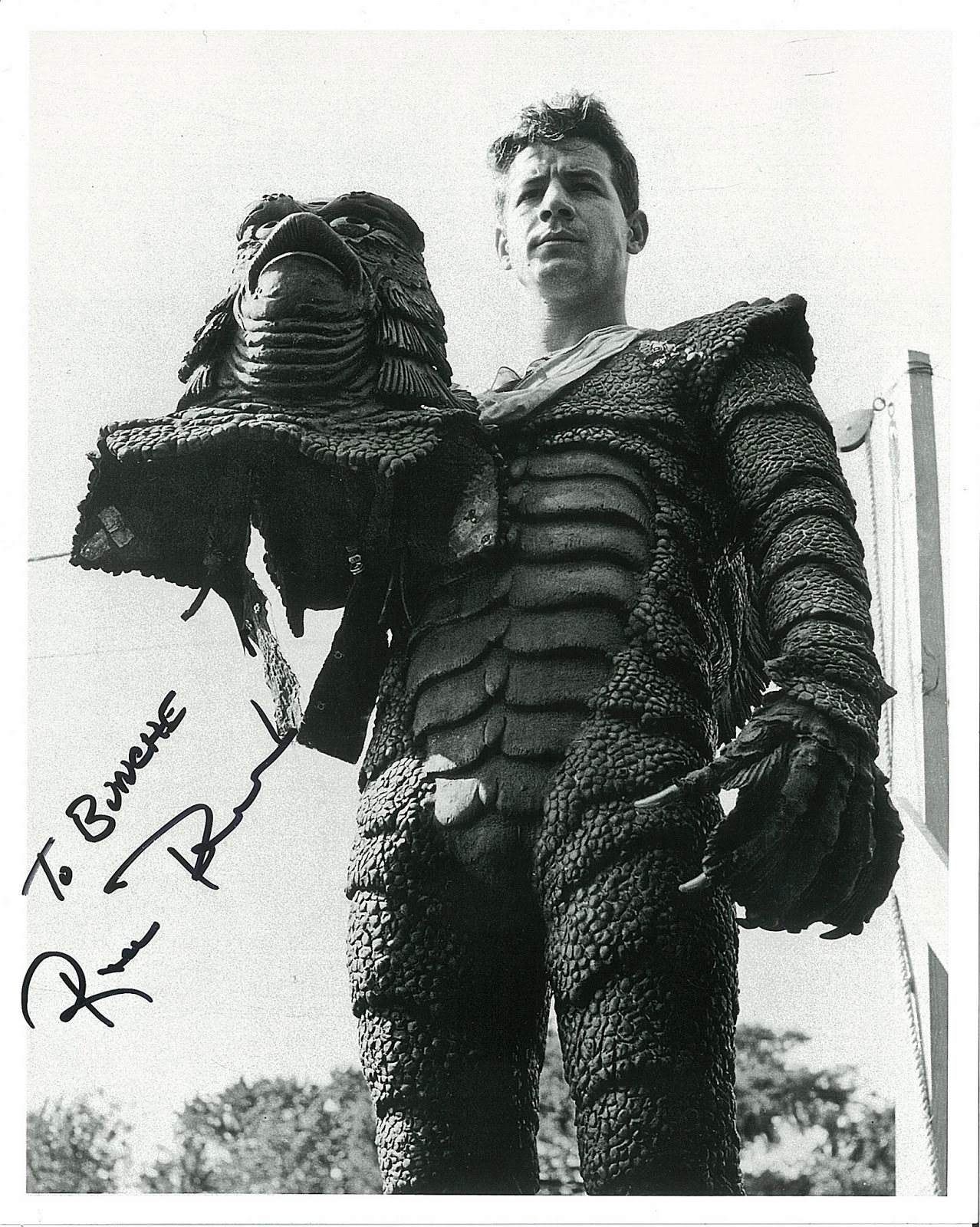 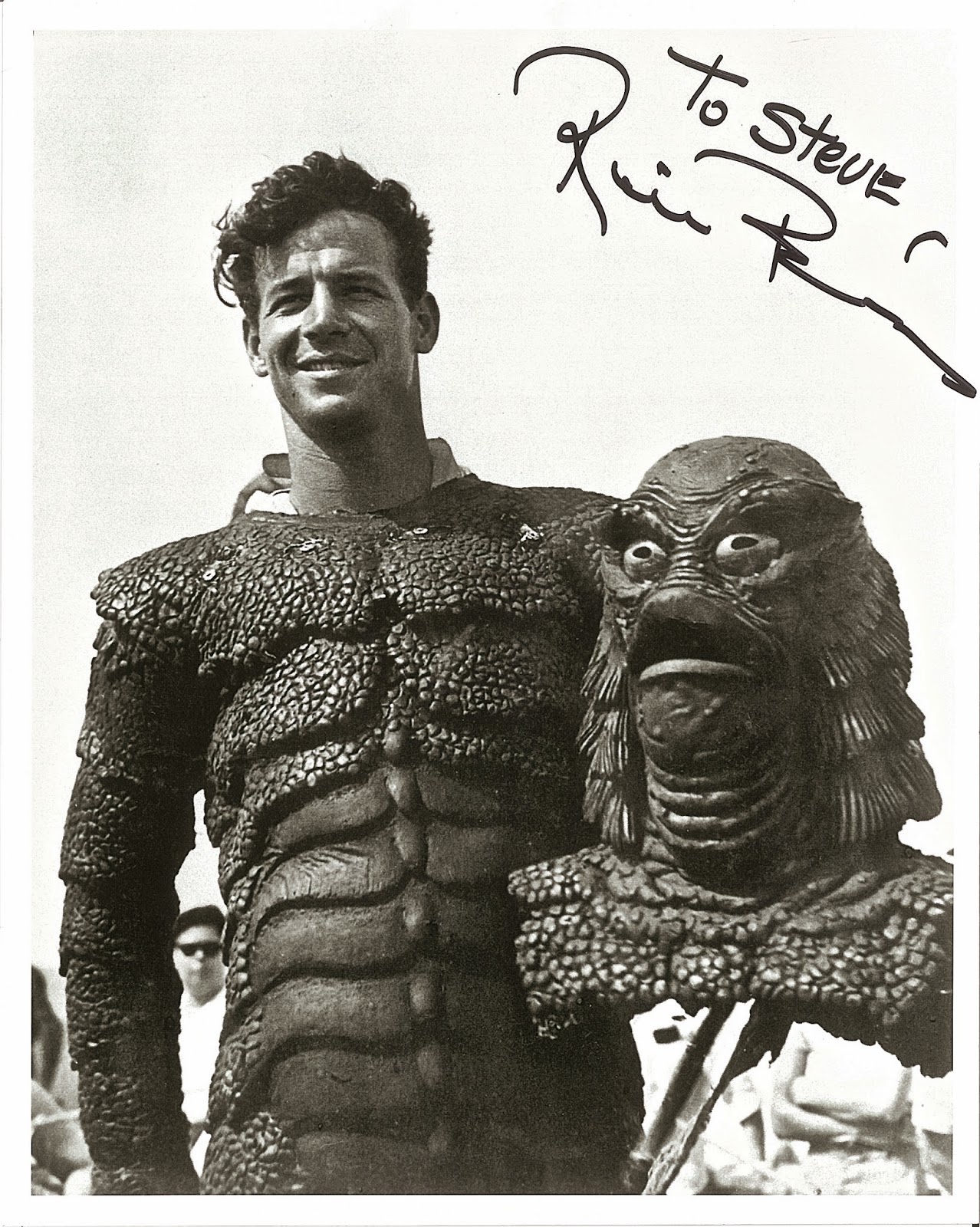 This next one is of Akira Takarada, the star of the original GODZILLA (1954) and a good number of other vintage Toho giant monster and sci-fi classics. 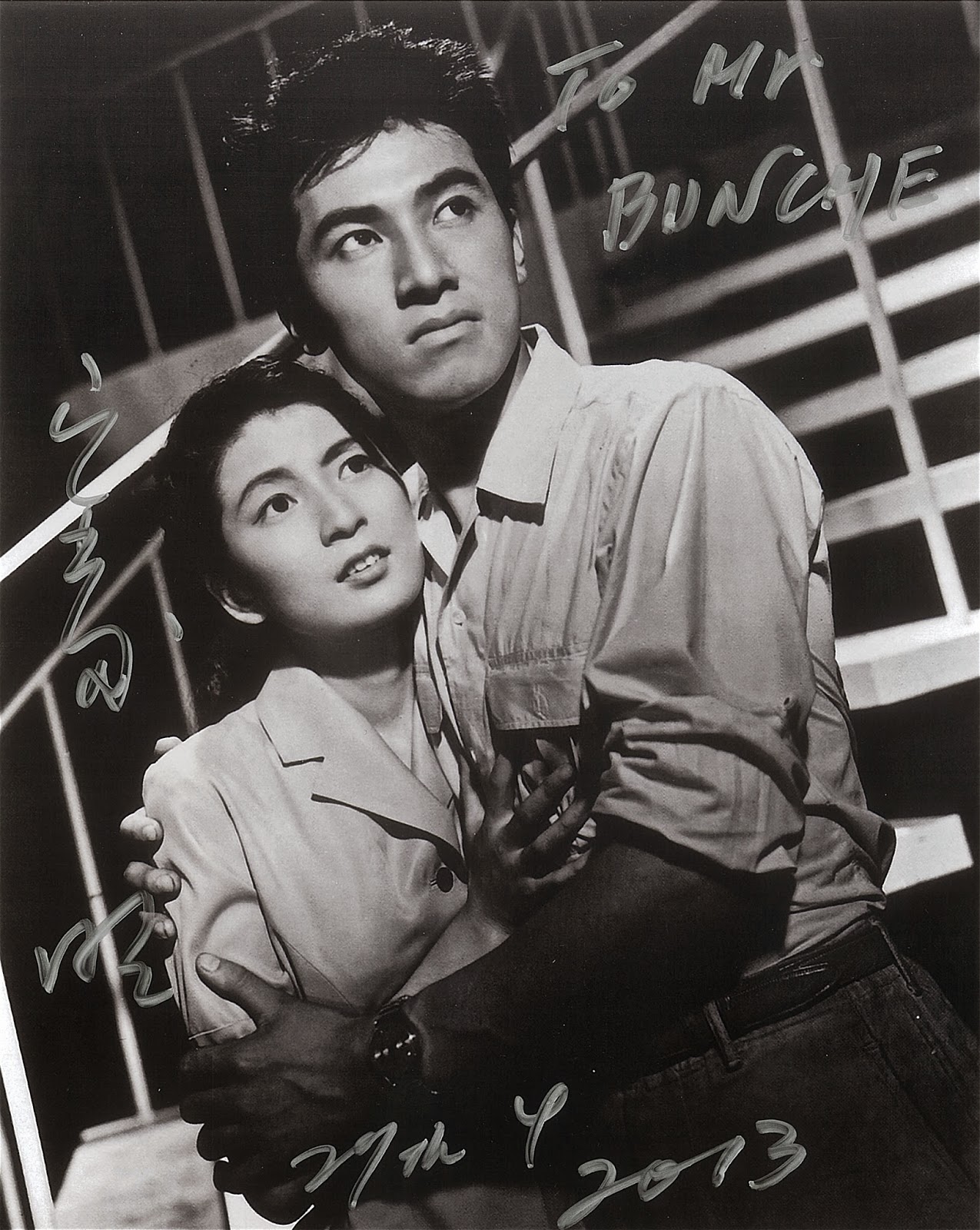 Here's an "only in New York" story for you: About a year and a half ago a new neighbor moved in across the hall from me and while we chatted and got to know each other, he mentioned that his dad was an actor. When I asked if I'd heard of his dad, my new neighbor, Preston by name, told me that his dad was none other than Ed Neal, the creepy hitchhiker in the  horror masterpiece THE TEXAS CHAIN SAW MASSACRE (1974), which happens to be my favorite horror film. This past Christmas, Preston came back from spending the holidays with his family and he brought this great cast photo signed by his dad. Preston moved out around a month ago and I was sad to see him go. A great neighbor and a solid dude all around. 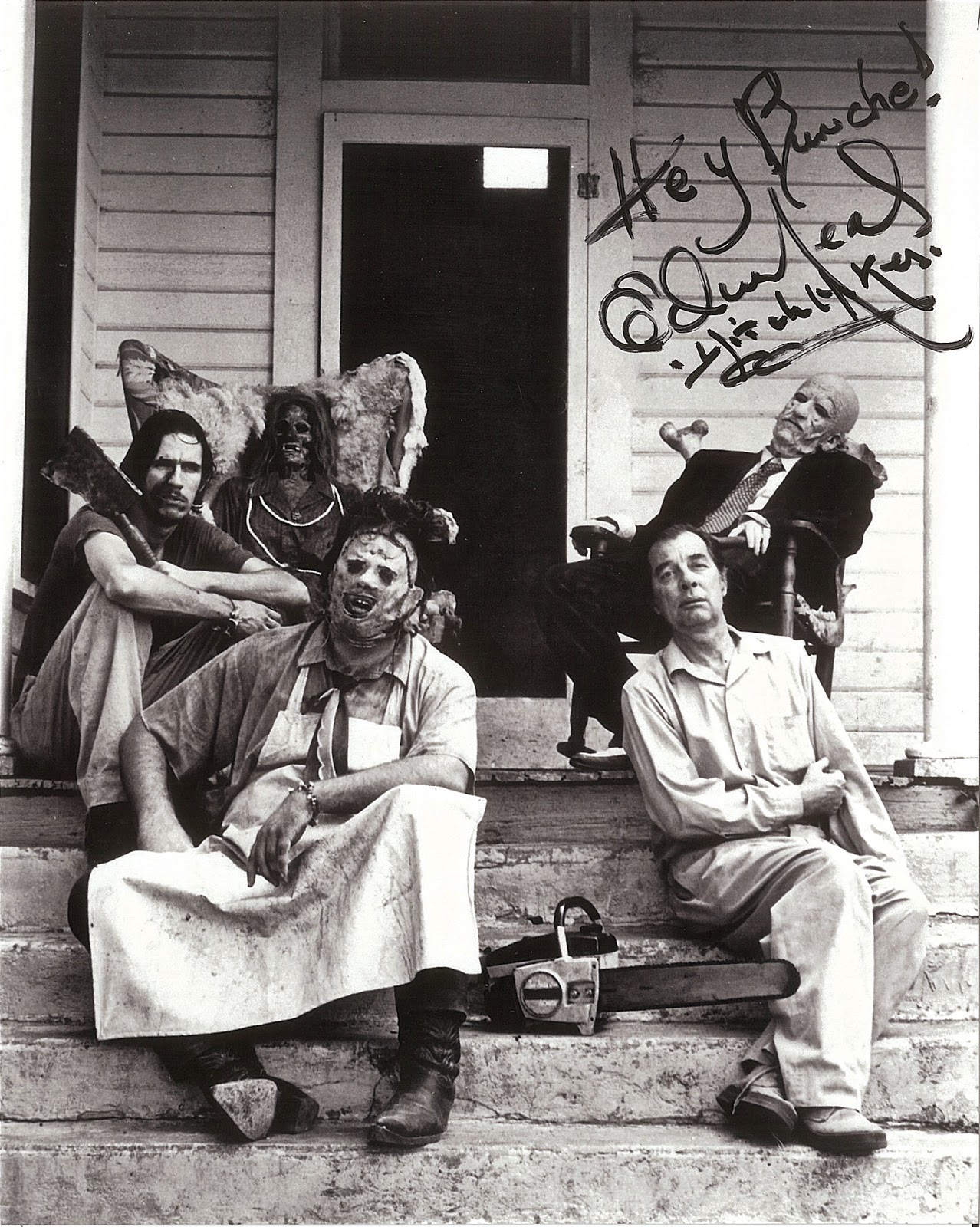 If I'd had this next one during the 1970's, it would have been worth a solid gold brick at my elementary school. Yes, I met Henry Winkler, one of the indelible gods of '70's TV thanks to his portrayal of the Fonz on HAPPY DAYS. In person he's a really down-to-earth guy and if you ever meet him, please show him some love. 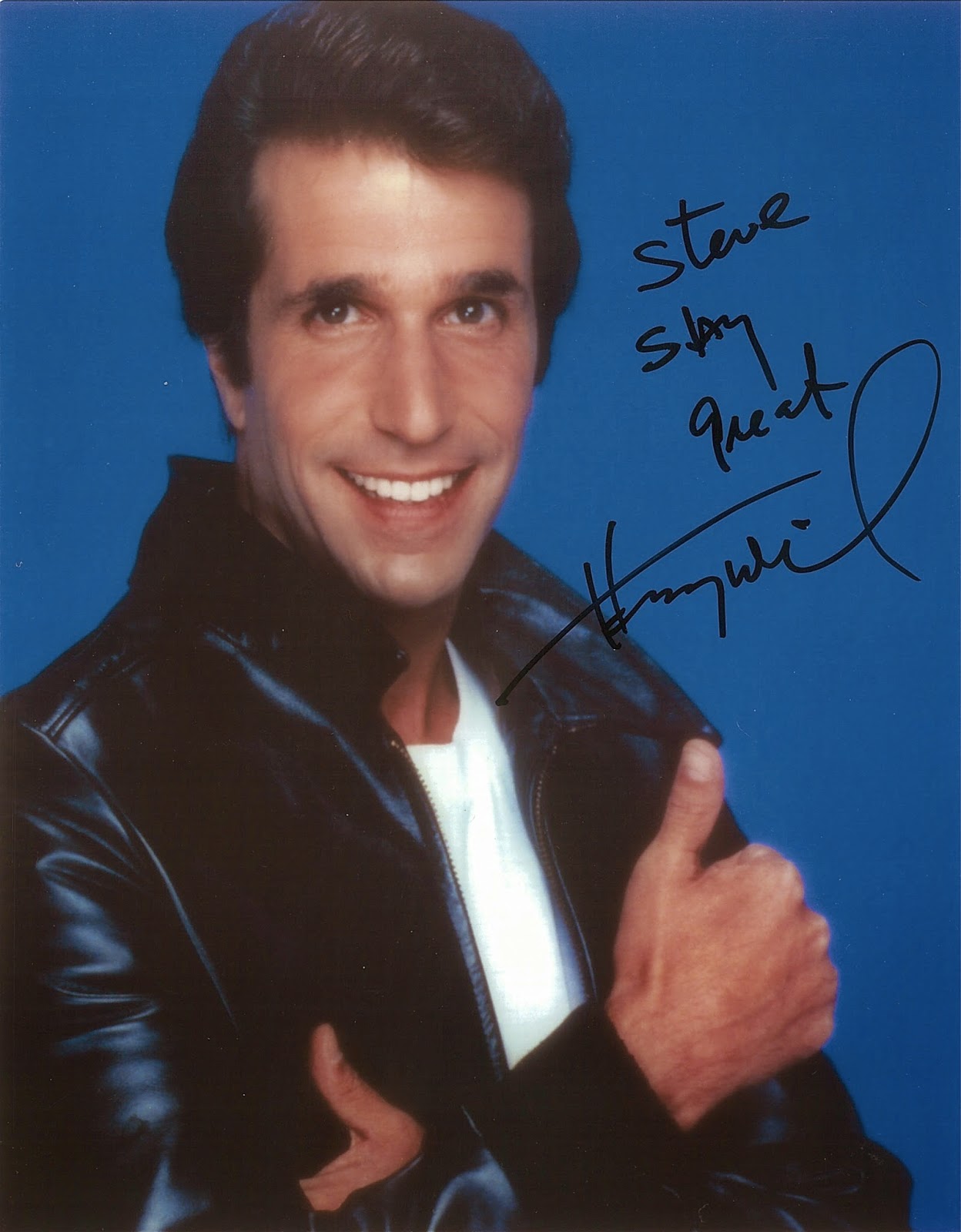 And how could I not want a shot of the Fonz jumping the shark, the infamous act from which the now-ubiquitpus term was cribbed? 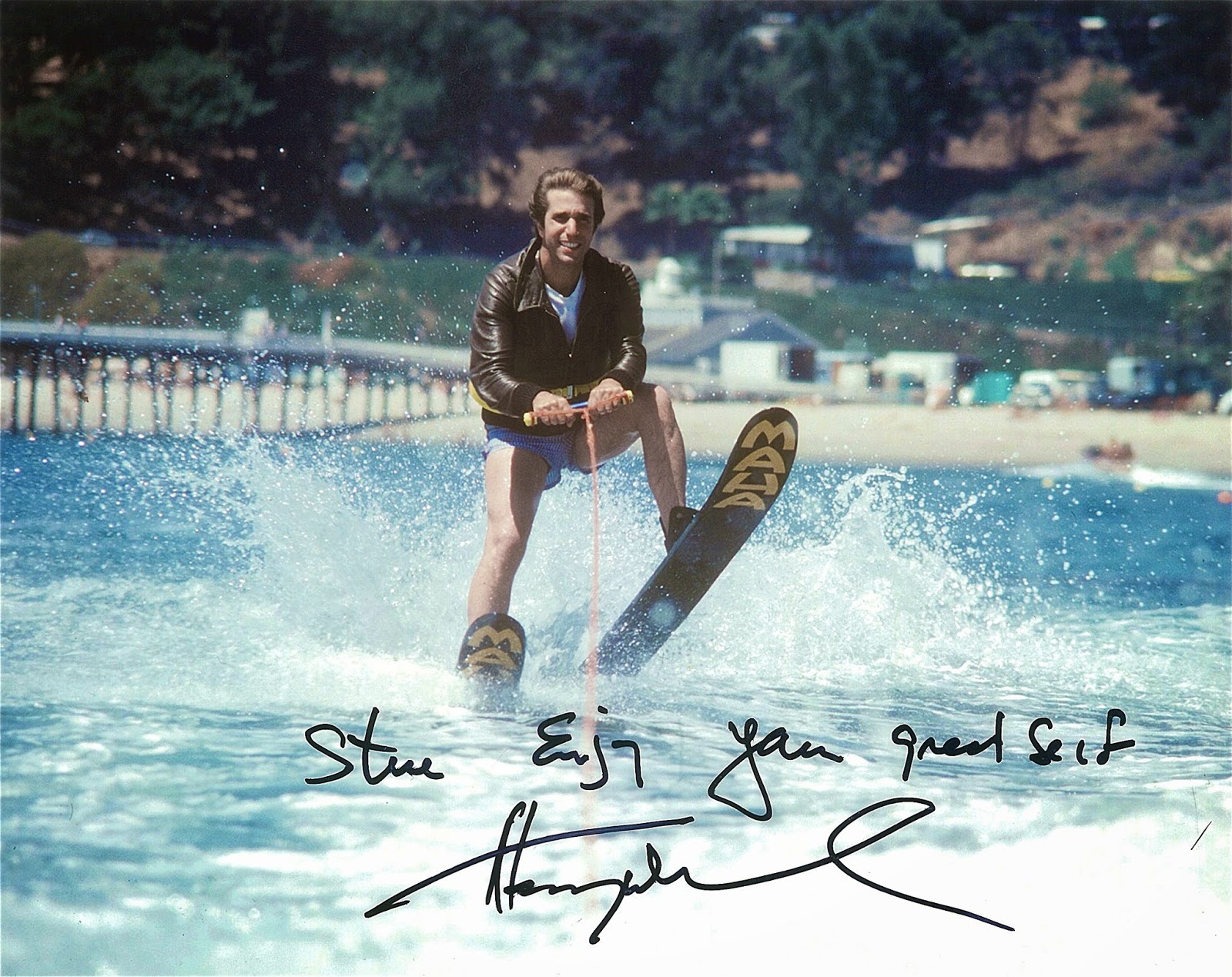 And while my collection of autographed photos contains a number of serious scores, few are as sacred to me as this last one: 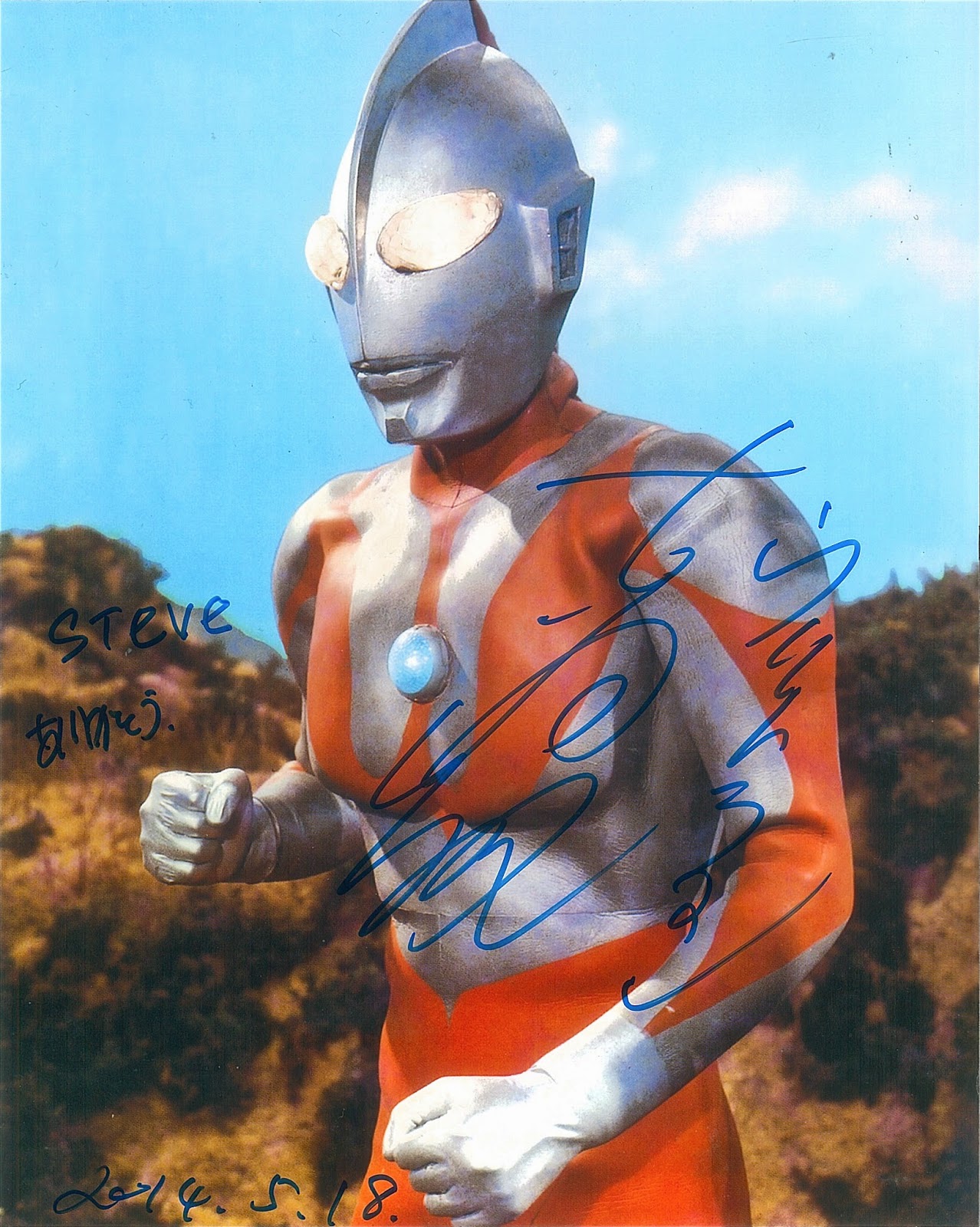 Yes, that's Bin Furuya, aka Ultraman, my favorite superhero from childhood and the character who served as my gateway into my lifelong obsession with Japanese giant monster and sci-fi culture. In short, this is right up there with my shots of Patrick Macnee and Sonny Ciba as my collection's holiest of holy grails.
Posted by Bunche (pop culture ronin) at Thursday, May 29, 2014