MY PEOPLE, MAKING ME PROUD ONCE AGAIN 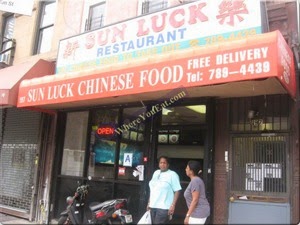 Sun Luck Chinese takeout: the scene of many an embarrassing display of coonism in my area of Brooklyn's Park Slope.

I just got back from picking up some Chinese food from my favorite grungy takeout joint and once again I'm disgusted by the behavior of some of my neighborhood's ghetto-acting blacks.

I've been a regular customer at the takeout place for fourteen years and the staff loves me because I'm one of the few neighborhood highly rhythmic individuals who is invariably polite and friendly plus I clearly appreciate the Chinese and their culture, which results in my orders being portioned more generously than average and sometimes I'm given the old menu prices. Unfortuantely I'm something of an anomaly, as the majority of the black and Hispanic patrons come in and treat the staff in an incredibly discourteous manner as though it were the expected etiquette, always try to get the sweet (and much put-upon) cashier lady to lower the prices, and take over the limited seating in droves while acting like uncouth trash and letting their undisciplined children run loudly around the place without any attempt at controlling them. 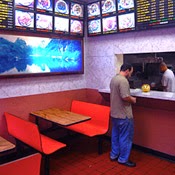 The interior of Sun Luck. The two tables seen here are the only areas on which to dine, which only makes sense as the place is meant to be predominately a takeout joint. Those tables serve as perches for some of the rudest, most hostile and uncouth people in the neighborhood, all of them invariably invariably black or Hispanic. Once I receive my order, I'm out of there like a shot.

While I awaited tonight's order and attempted to read a book, my concentration was thrown off by a respectable-looking black couple who were in their late twenties, but displayed the table manners of Visigoths. The woman belched and farted several times and made zero attempt at apologizing or even hiding her gaseous expulsions, and her boyfriend devoured his order of ribs apparently with no concept of how to use a napkin. His fingers and hands were dripping with sauce to a degree that made him look like he was the Incredible Melting Man, and his mouth and cheeks looked like he'd been going down on a heavily-menstruating she-Orc. Compounding this charming display was the sound of his open-mouthed chewing and loud smacking of his food.

The couple finished before my order was ready and when they exited they simply left the mound of bones and other detritus from their sloppily-consumed meal on the booth's table, garnished with the splattered evidence of barbecue and soy sauce. On the way out of the joint the customer cannot help but notice and walk past the large trash receptacle right next to the door, but these charmers didn't even attempt to clean up after themselves like considerate grownups, instead leaving the cleanup to the visibly disgusted staff. This kind of thing is par for the course for this takeout joint and I can only think of perhaps five times over the past fourteen years when I've gone in there and no poor behavior was being displayed by my brown brethren. Yet somehow the staff of the place maintains its cool and NEVER rises to the bait that many of their patrons throw at them. Strong people...
Posted by Bunche (pop culture ronin) at Saturday, July 12, 2014

It's called "keeping it real"