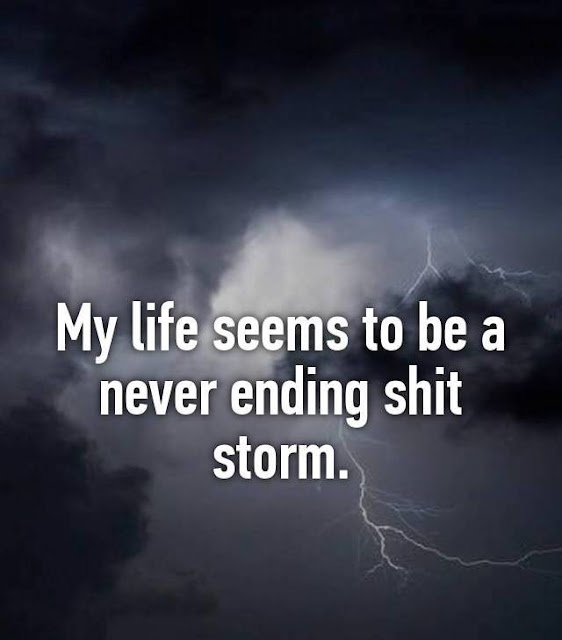 Well, today sucked out loud. "Hey, Steve! What did I do on your summer vacation? Fun in the sun? Debauchery between the oiled, tanned thighs of some sweet lady in a sarong? Teaching bottlenose dolphins to be eloquent vulgarians?" Oh, GO FUCK YOURSELF...


Though the recurring hiccups gave me a brief respite during last night's watch of DOOM PATROL, they returned with a vengeance and kept me awake all night long. I could not go for more than a few seconds without hiccuping, so I resolved to make my way to the local urgent care when it opened at 8am. I had a similar issue two or three years ago and that's where I went for help during that incident, receiving a prescription for Gabapentin in the bargain. (It resets the vagus nerve, thus preventing the hiccups.)

Today, however, found me admitted a little after 10am, and once shown into an examination room I told the resident what was wrong, along with my prior history with the same thing and how I had come there before for help, and making sure to mention that Gabapentin did the trick last time. I also clarified matters further by letting him know that I'd had that nuclear stress test on Monday and that my hiccups started in earnest sometime on Tuesday.

The resident left and soon came back with the attending physician, and upon hearing all of this he asked me why I needed the nuclear stress test. I told him it was to check the state of my heart ahead of the upcoming dialysis fistula surgery, which was itself ahead of the eventual kidney transplant, and that information gave him pause. He felt that because a nuclear stress test is stressful (it's right there in the name), it was possible that the dilation of my heart's arteries may have shaken me up and kick-started the hiccups. So, before anything else could be done, he felt it would be advisable for me to undergo an EKG. I resigned myself to it because an EKG is basically non-invasive and quick, plus my chest and abdomen still bore the bare patches from when I got shaved for the EKG I underwent the other day.

Unfortunately for me, the resident was the one who was tasked to hook me up and administer the test, and the guy clearly did not know what he was doing. It took him 20 minutes to figure everything out, and the doctor, who was present for most of the prep, offered no assistance. After much fumbling I was finally properly connected to the unit, and when the doctor looked over the results he told me to get myself to the nearest ER immediately.

I had just been given good news in this department by my team at Mount Sinai two days prior, so to hear that was a blow.

When I asked exactly what was wrong, the doctor stated that due to my age and the fact that I am a high-risk patient, it was best if I let the folks in the ER at NY Methodist (which was two avenues away) give me a going-over, which would include another EKG, blood work, et cetera, a prospect that filled me with dread, especially since I just cannot seem to go more than a week or two without being in a hospital for something. And frankly, I am fucking sick of it.

I explained that I had received good results from my cardiologist, but the urgent care doctor was having none of it. He began filling my head with every worst case scenario he could think of, including the possibility of me having "a metabolic abnormality," and with that I admittedly kind of lost it. I just sat there, silent at first, and then I quietly-but-sternly stated "It never fucking ends..." followed by a ramble expressing my utter weariness of all of this, only I cannot even remember exactly what I said. All I know is that I was clearly angry, as when I am in that state I remain seemingly calm but level-voiced while avoiding the use of contractions when I speak. The doctor was visibly taken aback, and he had backed up by a few feet as he said "I'm sorry. It's a hard road." In my head I responded with "Tell me something I don't know motherfucker," but I opted to be polite and instead stated "Yeah. It's a hard road I've been walking for the past seven years, and I am just exhausted."

The doctor proceeded to try and placate me, stating that if I went to the ER and it turned out to be a waste of time, "Hey, no big deal, but you've got to stay on top of this sort of thing." I figured there was no point in trying to get across to him just how comprehensively "on top of this sort of thing" I am and have been for years, so I told him I would go. At that point I would have said anything, just so I could get the hell out of there. Not just because of the unpleasantness of yet more testing and hospital shit, but because I could see my energy was scaring the shit out of the doctor. Those of you who know me in the world outside of social media know that I am basically a pussycat, but to those who have never encountered me before, I am a large black man whose manner of communication and overall demeanor do not jibe with the common perception an American black male, so I am already an unknown and confusing commodity to most. Couple all of that with all that's been going on of late, and in some eyes I become some weird sepia golem, only dispatched by who knows what ire-fueled forces. (Let me assure you it was not Rabbi Loew.) I did not mean to scare anyone, and the fact that that's exactly what I was doing just brought me right down. Anyway, I left immediately after being handed my dismissal papers.

Instead of hitting the ER, I came straight home, deeply bummed-out, and called a dear friend who's a doctor. Since all of my medical shit kicked off, she kindly offered her assistance as a consultant if shit gets too thick, so I called and told her what had just happened. I was immediately glad that I called her, because her calm, rational and soothing voice always puts me at familial ease, and upon hearing the situation she suggested that I call my cardiologist and may primary care physician at Mount Sinai for their take on the matter. I was still hiccuping and it was driving me insane, so I hoped talking with either of them would get me the Gabapentin I was denied during my urgent care visit. I left messages with the aforementioned Mount Sinai doctors and attempted to get some sleep while awaiting their responses, but that effort proved futile.

I eventually heard back from my cardiologist and, upon hearing of the situation at urgent care, he told me in no uncertain terms that there was no need for me to go to the ER, as my results from the other day clearly showed that, while not the acme of heart health, I was doing quite well, all things considered. The urgent care doctor may have been erring on the side of caution, but he also did not have my charts or the recent cardiac imaging to base his assumptions on, while my cardiologist had all of that. He told me not to worry and that the hiccups should clear up. If not, I was to call him again and we would take it from there. As for my primary care physician, she can sometimes take a while to get back to me if I leave her a message, which is wholly understandable, as Mount Sinai is swamped with COVID-19 cases, so I have yet to hear back from her. Thus, still no Gabapentin.

I again tried for some sleep, but I was so disoriented after no sleep due to endless hiccuping, I have no idea exactly how long I may or may not have managed to achieve some shuteye. The hiccups did eventually diminish considerably, but they still sneak in every few minutes, which definitely beats them occurring every ten seconds or less. I'm hoping it will all finally abate by the morning, by my throat is raw from all of it, and I have massive headache.
Posted by Bunche (pop culture ronin) at Friday, July 10, 2020