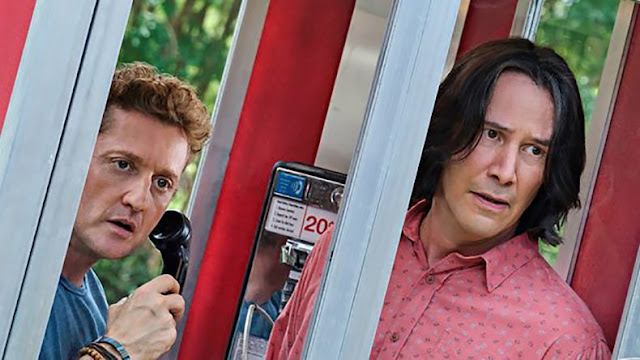 Older and no wiser: the long-awaited and most welcome return of Bill S. Preston (Alex Winter) and Ted (Keanu Reevs) Theodore Logan.

Just finished watching BILL & TED FACE THE MUSIC, and I found it to be considerably superior to the second entry in the series, BILL & TED'S BOGUS JOURNEY (1991), a film that is not without its supporters. And before we get to the review, the original BILL & TED'S EXCELLENT ADVENTURE (1989) is still the best of the unintentional but very much a trilogy. This current entry brings everything full circle, and who of us who saw the original when it came out would have expected a return to our heroes some 31 years later?
The film finds our hapless heroes, still brought to life by Alex Winter and Keanu Reeves — who slide back into the roles effortlessly — racing against the clock to simultaneously acquire the song that will unite humanity and save an unraveling universe, while also seeking to prevent their wives — 15th century princess, remember — from leaving them. Meanwhile, their daughters and female doppelgangers, Billie and Thea — they named their daughters after each other — go off on a trans-temporal adventure of their own as they assemble a band to play the song that their fathers are destined to craft, and in the process they set up "Bill & Ted: The Next Generation," should there be more of these. 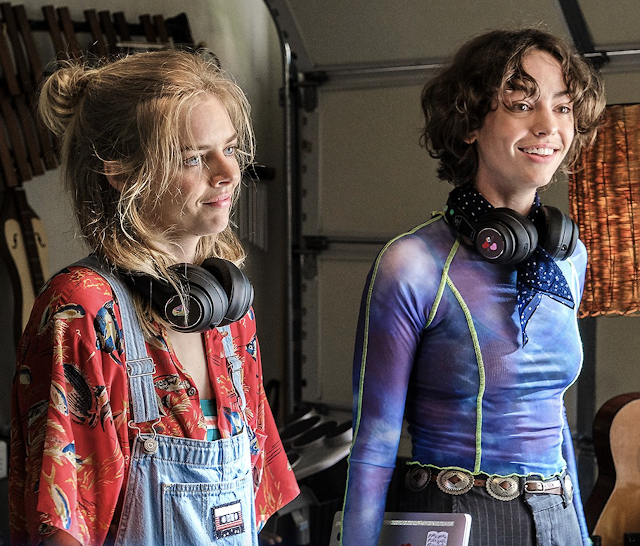 Thea (Samara Weaving) and Billie (Brigette Lundy-Paine): the next generation of time travelers?

Winter and Reeves return to their old characters deftly, having not lost a single step, and William Sadler returns as Death, reprising the role that was easily the best thing about BOGUS JOURNEY. Billie and Thea are basically Bill & Ted reborn as girls and they both work as distaff duplicates of their fathers, so they would be welcome if the torch is passed to them. Brigette Lundy-Paine is a standout as Billie, thanks to her nailing everything when it comes to a new embodiment of Reeves's Ted. She nails his manner of speech and his body language to an uncanny degree, and I would love to see more of her in the role. We also get Billie and Thea assembling an eclectic crew to travel through time with, including Jimi Hendrix, Luis Armstrong, Mozart, and others. It's a loony, convoluted mess that's a hoot to sit through, and it ends with quite and unexpected twist, actually...

There are no gags that went nowhere like in the previous film — one word: "Station," though station does briefly return as a nod to what came before — and the whole film is just a much-needed feel-good movie for this dire era. It's amusing on its own, but I think a lot of whether or not the viewer will enjoy it will be based on how much the viewer is already a Bill & Ted fan.

Bottom line: BILL & TED FACE THE MUSIC is just what we need right now, and I feel good for having sat through it. If I had seen it in the theater at full price, I would have exited satisfied and in a good mood.

Lastly, illegal "party favors" are recommended for full enjoyment. Trust me on that one! 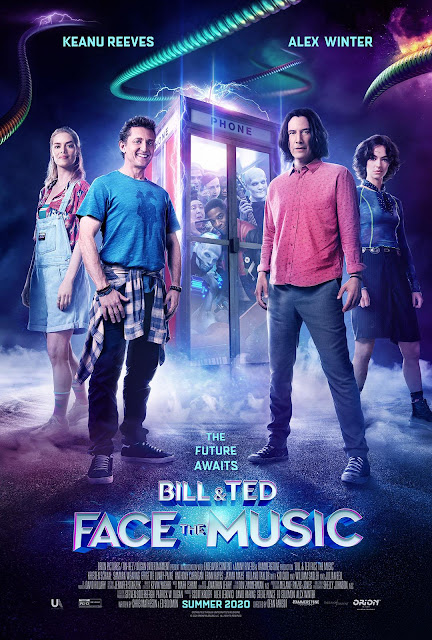