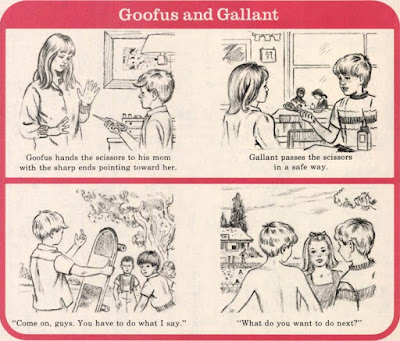 A friend posted a parody of HIGHLIGHTS FOR CHILDREN's legendary GOOFUS AND GALLANT page on his Facebook, and it brought to mind the following tale from my childhood as I recounted it on my friend's post's comments thread:

Goofus and Gallant was my favorite part of Highlights, strictly for its heavyhandedness and for Goofus's assholism.

It struck home for me because my mom had a friend, Althea, who was a divorcee with a son a year or two younger than me who was named Eric, and he was without question the worst, nastiest, most ill-behaved child it has ever been my misfortune to have been forced to associate with, and when we were in the same space because of our mothers' friendship, I was the unintentional Gallant to his all-too-real Goofus.

Mom and Althea were two recent divorcees of color in the Westport/Weston climate of the mid-1970's, so they turned to each other for support. Whenever my mom would have that woman over, she would invariably bring her horrid spawn and we would all go out to somewhere like a mall, where he would always pick the perfect spot and moment in which to act like an unconscionable turd. Some examples:

When Eric demanded some money to buy a snack, his mother told him he would have to wait until dinner, which he did not like, so he snatched her purse, emptied it onto the floor, picked up her coin change, threw it in such a way as to scatter it, and loudly exclaimed (in order to call attention to himself and his mother) "Now, pick it up!!!" His mother, totally broken by her son's behavior after years of such shit, sheepishly complied, much to the indignation of my mom.

The classic example, however, was one time when we were all out at a lake with a fishing pier, and his mother said or did something to set him off, so he looked around for anything that he could cause trouble or embarrass her with, and his sights settled on an innocent fisherman's huge and clearly expensive and well-stocked tackle box. He walked over to the tackle box, gave his mother an evil grin, picked up the tackle box, and promptly chucked it into the lake. It was a deep lake, so retrieving it was not an option. Needless to say, the owner was PISSED, the police were called, and Eric's mother had to hand the guy every bit of cash she had on her at the time.

For me, that was the final straw, as I had endured too much of Eric's asshole behavior and his mother's refusal to give him a well-earned ass-kicking for about two years, so when my mom and I got home from that mortifying situation, 9-year-old me said to my mother "Mom, you know I am not a bad kid and that I would not do anything stupid if you were to leave me here alone in the house. I promise you that, but I'm telling you right now that I absolutely refuse to ever go anywhere with Althea and Eric ever again. He's horrible, she just takes it, and it's always embarrassing and stressful. I AM DONE." Surprisingly, my mother did not object to me laying down the law — believe me, she understood — and after that I maybe saw Eric once or twice more during the '70's, and then only briefly.

According to my mom, Eric was fucked up by his folks divorcing, and he took it out on his mother. Also, and I never noticed this, in recent years mom said that early on she noticed that Eric had hearing issues and that was definitely a major part of why he acted out, but his mother just blew it off rather than get him help when alerted to the problem.

Mom is still sometimes in touch with Althea (now in her early 80's), so she hears about Eric as a 50-something. He's reportedly still an asshole, and he has a string of failed marriages, abused wives, and neglected children.