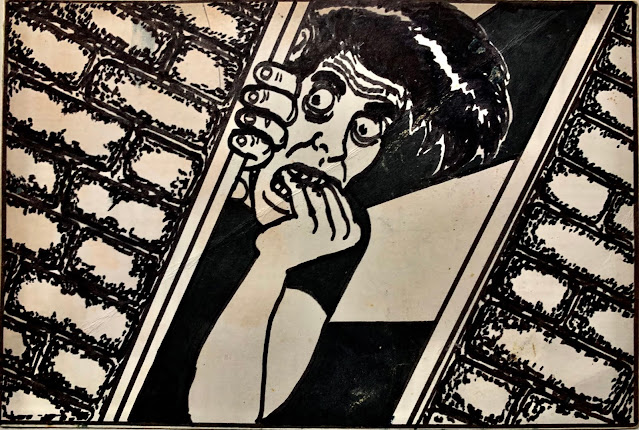 This was drawn at SUNY Purchase during the spring of 1986, when an acquaintance gave me what I thought was a date or some kind of dried fruit, but was instead a big chunk of Lebanese hashish. It was a Saturday and I ate it during breakfast in the dining hall, and once I ingested it, the guy, a friend of a friend, told me what it was. I was most displeased, and after about 20 minutes its effects began to kick in.

I hauled ass back to my dorm room and sequestered myself in its cozy confines for the next twelve hours, only occasionally interacting with people whom I called and invited in so I would not go insane. I spent hours playing records in an attempt to ground myself, but I was off on an unintended cosmic voyage. You know the sequence in WATCHMEN where Adrian Veidt eats a ball of hashish and has a cosmic vision/epiphany? I had much the same experience, and I freely admit that on a deep level it changed me and made me more aware of my inner demons.
Anyway, I was too deep into internal cosmic travel to sleep, so I drew this with a Sharpie. Anyone who went to Purchase will remember the oppressive presence of bricks everywhere, so the bricks here were drawn with an intentionally unsettling texture.
While angry at being given a super-string edible without first being informed of what it was — my first experience with such, but far from the last — the experience led to enlightenment, and in the years following, I have gone for hashish whenever it was available. A co-worker in the Marvel Bullpen was from Holland, and when she went for a visit with family in Amsterdam, she sent me a generous supply of hashish that she carefully wrapped so its scent would not be detected, and she further masked the scent by stuffing the hashish inside a half-eaten box of Crunch 'N' Much, so I got two kinds of goodies when I received the package. (I had her send to my apartment, but I had her use "Kyoshiro Nemuri" as the recipient's name.) I used what she sent for a now-legendary batch of serious brownies that I served at a big apartment party. Much cosmic awareness was achieved that evening.
Great. Now I want a hash brownie...
Posted by Bunche (pop culture ronin) at Tuesday, July 06, 2021