So, BLACK WIDOW is good enough to have held my attention, but it’s definitely a lesser Marvel flick. Not bad, per se, just lesser.

The plot finally gives us an origin for Natasha, and it's a tragic one, revealing more secrets of the Red Room. It opens with a look at barely-pubescent Natasha and her six-year-old sister, Yelena, living an idyllic life with their mother and father in Ohio. But, this being an espionage story, nothing is as it seems, and soon enough the girls are turned over by their father and drugged, subsequently spirited away for Red Room indoctrination. If you were paying attention to details dropped by Natasha in the AVENGERS films, you have a pretty good idea of what she and Yelena endured while being molded into elite professional killers. The story then skips ahead by 21 years, and we see Natasha still on the run after the events of CAPTAIN AMERICA: CIVIL WAR. After that, I will spoil nothing, other than to state that the now-grown Yelena is still under the mind-control of the Red Room, but not for long...

Scarlett Johansson as the Black Widow has only really shined in a handful of the MCU movies, and while I'm sure the scriptwriters and directors instructed her to mostly play Natasha as something of a personality-void badass — with the exception of her turns in CAPTAIN AMERICA: THE WINTER SOLDIER and AVENGERS: ENDGAME — the blandness of her standard performance as Natasha makes me sad because I love the character as portrayed on the page, and little or none of what endeared me to her in the first place — 50 (!!!) years ago — has been present onscreen. Instead, this film is utterly stolen by Florence Pugh as Yelena Bolova. Once freed from the stranglehold of the Red Room, she displays personality to burn, which is good because she's clearly being set up to replace Natasha after the events of AVENGERS: ENDGAME. David Harbour and Rachel Weisz are also quite good as Nat and Yelena's parents, and that's all I'll say on that.

The film does not need to be 133 minutes long, and at times it has serious issues with pacing, a state of affairs familiar to anyone who's seen a Bond or Bourne movie over the past 25 years, and it’s needlessly over-long at 133 minutes, nearly ten of which are credits. Other than it being set in the MCU, it’s just another big-budget espionage flick. It takes place immediately after Captain America: Civil War, and it should have been released in sequence. Releasing it now comes as a case of too little too late. The time to strike would have been during the height of Avengers-Mania, when everyone and their parakeet would have shelled out the movie theater ticket price to see it. I was fortunate to have access to a friend's Plex account, and thanks to that I can honestly say that the film is in no way worth the thirty bucks Disney+ wants for it.

Lastly, by now you all know the drill, but I'm saying it anyway: If you do allow yourself to be rooked for thirty bucks, make sure to stay for the stinger at the end. I am intrigued... 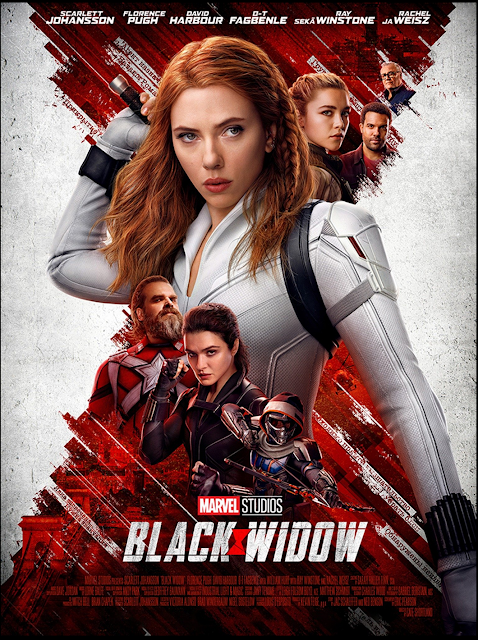