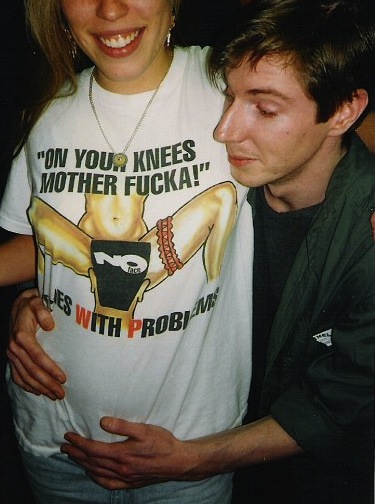 Every once in a while one gets reminded that life is good.

Freelance gigs notwithstanding, I am still technically unemployed, and with that state of slackerness comes a freedom that I forgot during my thirteen years in the salt mines of comics. Instead of spending another day in fruitless pursuit of reentry into the nine-to-five rat race, today I chose to enjoy some time outside of my rent-a-hovel — which has become sort of a cell with amenities — and run around Manhattan with my equally unemployed pal Hughes, who has been a brother to me since we met during our college days. I had to pick up part of the cash for the latest Bunche/Cat Love Sensation barbecue soiree from Cat’s hubby in the City anyway, so why not make a carefree day of it?

Canopied by a Hollywood-backdrop-perfect blue sky Hughes and I departed for the far Western side of Midtown before noon and rendezvoused with Rich at the CBS news building. Every time I hook up with Richard I think to myself that my old friend Cat has chosen her mate wisely; Richard is a life-loving Brazilian who knows his way around a kitchen and quality butcher shops, along with being a generally cool guy whose presence in the room just makes you feel good. He took Hughes and I into the lower level of the new Time/Warner building/high class shopping Mecca and I was bowled over by its incredible butcher shop. Taking me to such a place is like taking a sports fan to the most incredible memorabilia shop they’ve ever seen, and even though the prices may be steep just witnessing such an array of items fuels fantasies of what you could do if you could get your eager mitts on the stuff. I stood mesmerized by the most visually appealing selection of meats that I have beheld in years, uncaring about my lack of funds with which to purchase these crown jewels of protein. Whenever I have such cash I will return there posthaste, and grab some choice lamb for a slow-simmered stew that will be so good that you’ll want to slap your momma.

After Rich picked up a lunch to bring back to his office, Hughes and I walked up Broadway to lunch at the incomparable — and dirt cheap — Gray’s Papaya on 72nd Street where we scarfed down some of New York’s finest grilled hot dogs; I ate three of these tasty masterpieces slathered with brown deli mustard and washed them down with the chain’s signature papaya drink, and my memory drifted back to the not-so-long-ago era of the early 1990’s when I lived in the area and if the mood struck me I could simply walk out of my apartment on 89th Street for a round of tube steaks at any hour of the day or night. The banner above Gray’s proudly proclaims, “We are open 24 hours a day. Every day,” and they are the welcome low class oasis in the snooty Upper West Side. 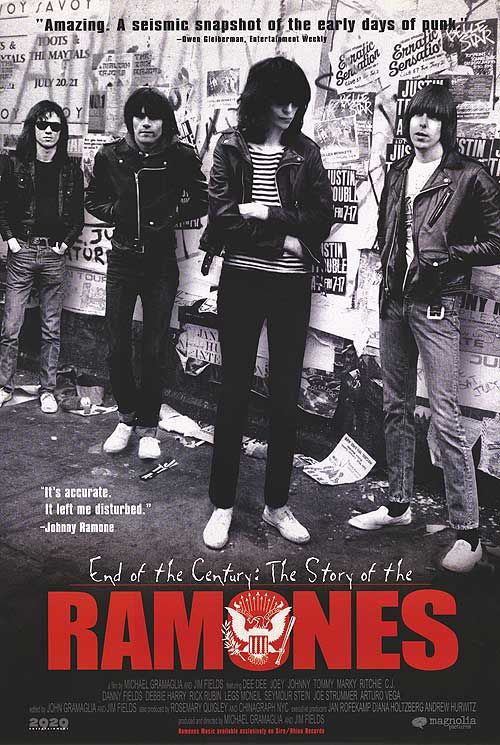 Having merrily polished off our delicious meal of reconstituted horse anuses and hooves, Hughes and I quickly realized that we still had most of the day ahead of us and decided to see END OF THE CENTURY: THE STORY OF THE RAMONES, a critically acclaimed documentary that had opened a few days ago and chronicled the stirring saga of one of our mutual favorite bands. The film didn’t start until 4:20, so we had nearly three hours to kill. We needed to make our way down to the Lower East Side and the Angelika theater, a venue despised by myself and many of my film freak pals due to its aggressively “cineaste” leanings, but it’s the only place in the entire city that has the film, so there was no choice but to bite the bullet and wander into this Hell of film-snobbery and pay tribute to the masters of Rock ‘n’ Roll’s three greatest chords.

After we crawled from the Stygian confines of the subway system, Hughes and I wandered around areas that we frequented back in the days, noting that such fondly remembered hangouts like the Samurai Pub have fallen to the passing of time and the yuppification of New York City. Oddly enough, this wasn’t a sad reflection, merely a stroll down Memory Lane.

After stops at a videogame emporium and a kickass record store, we decided to hang out at the fountain in Washington Square Park. That former bazaar of all manner of illegal substances is now quite family friendly, and nowhere was there the furtive exclamation of “Trips…Trips…Smoke…Smoke…,” which isn’t a bad thing since most of the, er, “entrepreneurs” of old sold weed that was pretty much an eighth of dirt.

Everywhere you looked there were people lazing about around the big fountain as children frolicked and shrieked joyously beneath the plumes of soon-to-be-gravitationally-stricken water. Hughes and I took up residence on the south side of the fountain and basked in the sun and wind-borne spray, a refreshing combination that made me realize that I hadn’t been so utterly content in months. I remarked to Hughes that we would never have been able to enjoy such excellence if we had been confined within an office, dealing with assholes.

After nearly ruining a tourist’s photo by providing the subject with the requisite via-fingers bunny ears, Hughes and I made our way to the theater and shelled out $10.25 (!!!) for admission. Yes, it cost $10.25 to get in, and if it weren’t a documentary about one of my five all-time favorite bands I would have asked the cashier if she had ever considered the possibility of turning her reproductive channel into a makeshift cash drawer. But since it was about Forest Hills' answer to the Fantastic Four, I played nice.

The theater reeked of high-falutin’ pretension, what with its overpriced café and gallery of French-language movie posters for films that were mostly rock-bottom-budget Italian superhero films from the 1960’s, but the place was pleasantly uncrowded since it was still early in the day and most of the Angelika’s clientele would not be turning out for a film about four stunningly unglamorous louts in black leather jackets and torn jeans. This atmosphere, some of the best popcorn I have had at a Manhattan theater in at least ten years and the sight of a middle-aged mother lugging her three under-thirteen-year-old sons to see the Ramones put me at ease.

The film itself was not just a treat for the faithful, but also trenchant look at one of the pioneering bands of what would later become known as punk rock, their impact on pop music and their frustrating lack of commercial success despite their status as beloved living legends. Candid and unafraid of revealing the unpleasant idiosyncrasies of the various band members over a twenty-one-year period, END OF THE CENTURY is compelling stuff indeed, and until the end I had to fight down my urge to sing along with each brief three-chord anthem that turned up on the soundtrack.

When the lights went up, Hughes and I parted ways since we both needed train lines that would return us to Brooklyn on opposite sides of the mighty Gowanus River. Steeped in the joys of a day-long romp around the city, good cheap food, the company of one of my favorite human beings and the ancient heraldic majesty of Ramones tunes resounding in my head, I made it back to Park Slope in a mood to spread love to the whole world. I stopped off at the local market and found one of the hard to get, perfectly seasoned sagey sausages that I adore for dinner and retired to my humble abode.

It just goes to show you that despite crushing poverty, every once in a while the planets align in just the right way and you get reminded beyond the shadow of a doubt that life can be good. Quite good indeed.
Posted by Bunche (pop culture ronin) at Wednesday, August 25, 2004

Well you just about made me wish, for a BRIEF moment, that I was back in NYC walking around with you. Then I looked outside and realized that I was a bit jealous and would like to have sat by the River Thames for a day, eating a sandwich, and watching the boats go by. Good for you! Hugs - Wendy

Da Nator said...
This comment has been removed by a blog administrator.
10:55 AM

I must say I agree with you on the wonders of my husband, and I'm glad prepping for the BBQ added to your perfect day. Not to spoil anybody's day, but did anyone else hear Michael Graves discussing his support for Bush on NPR yesterday morning? I can't really see The Misfits and compassionate conservatism in the same league--how 'bout you?