MOUSE WARS: EARLY MORNING ON THE FIELD OF BATTLE 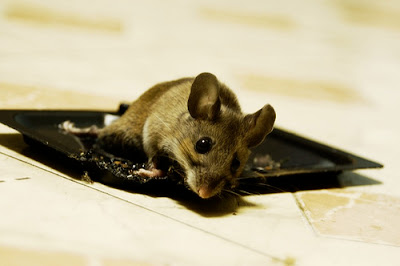 Of the many downsides of living in my tenement building, the one that irks me most is the mice. Since moving in here over seven years ago I have waged an ongoing war with the mice that periodically infest the building and shit all over the Goddamned place, and I know for a fact that I am not the only resident to regularly deal with those unwelcome visitors and their little "presents." The building is located right next to a community garden — more honestly described as a barely converted vacant lot — and there has to be some entry from there into my building. I often see rats and mice cavorting within the garden and am eternally thankful that I merely have mice; in the way that most people hate cockroaches I despise rodent vermin with a primal loathing and having them in my apartment nearly drives me mad. Even more maddening is the fact that I have never been able to figure out exactly where the hole that they get in here through is, otherwise I would have stuffed it with soaped steel wool and sealed it long ago.

One of the services provided as part of the rent is an exterminator who pops by on the third Sunday of each month and sprays for roaches, and upon request he will leave out a toxic block for the mice to nibble on and hopefully die from. Let me tell you with absolute certainty that the poison the guy uses has no effect on the wee invaders, and my preferred method of retaliation is glue traps, particularly those bearing the Tomcat brand. Tomcat traps are a bit pricier than others but they work like a charm thanks to a glue with a scent that is apparently quite enticing to
mice, and when I put down traps during the times when I know for a fact that they are about at night I am guaranteed to find at least one mired in the sticky goo, staring at me with those expressionless black little eyes. I then drop the trap and adhesed vermin into a plastic bag and drop the whole kit and kaboodle into the waiting trash cans outside.

There are two things that suck about this process:
1. When trapped, the mice thrash about, making a racket from moving the plastic trap around, and they also squeak. A lot. Very loudly. One cannot sleep through this shrill cacophany and the only way to restore peace and quiet is to get out of bed and dispose of the captive. Sadly, once I am awake I have a difficult time nodding off again.
2. Sometimes a mouse will wander into one of the traps while I am away for a few days and when I return I find that my apartment stinks hellaciously thanks to the mouse's decomposing corpse. It's truly amazing how something so small can generate such a powerful stench in almost no time at all; I once returned after two days to find my flat reeking like a week-long garbage strike and only figured out the cause after tearing the place apart and locating the rotting mouse behind my stove.

This morning I was awakened by the previously described thrashing and squeaking and looked into the area where I had laid down traps only a few hours earlier; not only was there a mouse loudly bemoaning its inability to free itself from the tenacious glue, but there was another one darting about looking for a way out before I could position another trap in front of its narrow escape crevace. I disposed of the helpless captive, put down another trap to fortify the mini-tar pit behind my kitchenette's counter, and attempted to sleep again. That plan was swiftly kiboshed when I heard the other mouse return; I can hear him now, scurrying about and it is only a matter of time until he wanders into his doom. Come and get it, you furry little motherfucker...
Posted by Bunche (pop culture ronin) at Wednesday, October 13, 2004

Da Nator said...
This comment has been removed by a blog administrator.
1:09 PM

Da Nator said...
This comment has been removed by a blog administrator.
1:18 PM

Dude, I love you, but this is fucked up. I have no sympathy for you losing sleep because the animals you are killing in a cruel manner are making noise in their pain. Maybe you can figure out a non-lethal solution. But, if you must kill them, please figure out a less torturous and inhumane to do it. Glue traps are fucking evil. No creature deserves to die that way.

Your friend the animal lover - GK

Bunche-man! As a former tenant of your building, I gotta tell ya - bring in the steel wool and plaster by the truckload and plug those holes! Yes, this means clearing shit away from walls and baseboards, crawling inside cabinets, and inspecting the nooks and crannies, but it is worth it. Even if you don't get every possible hole, you'll limit the means of entry and egress for the critters.

Also, I'd much rather go to "Little Rabbit Foo-Foo in the sky" via the traditional snap-trap than glue trap. I agree with GK: glue traps are cruel. Did I ever tell you how to "train" your mice for snap-traps?

And finally, I hope you enjoy the use of "plug those holes" and "nooks and crannies" in this comment.

i always found the simple plastic traps with some peanut butter were enough to kill mice. though i bet the nyc mice are more savvy and probably larger than they are in calif.

i don't think co-habitating with rodents is worth it. i would bail.

"...Dude, I love you, but this is fucked up. I have no sympathy for you losing sleep because the animals you are killing in a cruel manner are making noise in their pain. Maybe you can figure out a non-lethal solution. But, if you must kill them, please figure out a less torturous and inhumane to do it. Glue traps are fucking evil. No creature deserves to die that way."

Nah. Fuck that. Sure, Mice have a right to exist and all that bullshit ... Just not with you.

We're not talking about baby seals or whales or some shit like that. Mice are filthy vermin and they carry disease. Kill them the same way they'd kill (and eat) you if they could (see Willard, etc...). If glue works - buy more!! People who bitch about killing poor innocent mice have probably never found filthy little nuggets of mouse shit in their toothbrush and silverware. Fucking vermin.

If a mouse doesn't want to be treated badly, it should stay the fuck out of your house!

Hey Bunche, instead of just throwing them out, you should impale them on pencils and put them on display as a warning to all their devious little mouse buddies. It worked for Vlad Tepes (think I spelled that right)!!!