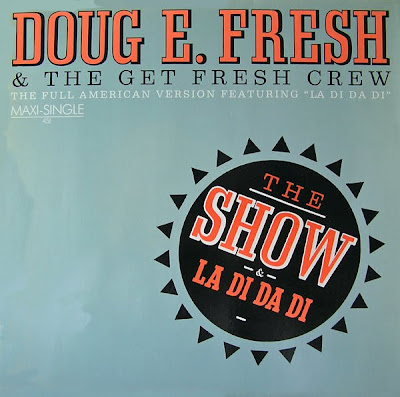 I have often bitched about the amazingly inconsiderate neighbors who occupy the welfare building next door to my tenement building; these devil-may-care intentionally-jobless fucks hang out on their stoop and mine all day and night, selling low-grade ditch weed and making ungodly amounts of noise, so much noise that the first floor apartments in my building stay occupied by the same person for no more than six to eight months. They regularly have friends who drive over in their SUV's that have had the back seat removed and replaced with speakers that put out enough eardrum-shattering bass to violate most strategic arms limitations treaties, and in general bring all of the worst black and Latino stereotypes to life. But today they earned a respite from my hatred by ironically doing exactly what they usually do, only this time by doing something that I like.

I left my flat on a mission to buy onions for the dinner that I was set to begin cooking when I heard the opening lyrics to "La Di Da Di," a 1985 rap classic by Doug E. Fresh with vocals by Slick Rick. My college buddy Nina loved that record and I still have the vinyl 12 inch somewhere in my monstrous collection, every word of which was burned into my bonghit-fueled mind during many a stoned afternoon of long ago. Upon hearing it, I turned toward the parked car from which it blared and began to sing along. Believe me when I say that it shocked the living shit out of my neighbors to see that I, the stuffy bookworm who speaks proper English, knew the song, right down to the often censored line about how the protagonist of the piece would not get with an older woman who aggressively pursued him because of, among other reasons, her "wrinkled pussy." (Excuse me if I'm wrong, but by virtue of general construction, isn't every pussy wrinkled to some degree?)

Upon finishing the song, I left to continue my errand, showered with applause and loud whoops and hollering from my delighted miscreant neighbors. I won't encourage them in future, but that song is just impossible for me to resist.
Posted by Bunche (pop culture ronin) at Tuesday, August 30, 2005

You know what, you peep this,
La di da di, we like to party.
We don’t cause trouble, we don’t bother nobody.
We’re... just some men that’s on the mic,
And when we rock upon the mic,
We rock the mic (right!).
For all a y’all, keepin’ y’all in health.
Just to see ya smile and enjoy ya’self.
Cause it’s cool when you cause a cozy conditionin’,
That we create, so that’s our mission, so listen,
To what we say because this type of shit happens everyday.
I... woke up around ten o’clock in the mornin’,
Gave myself a (strech up), a mornin’ yawn and...
Went to the bathroom to wash up,
Had some soap on my face and my hand upon the cup,
I said a (mirror mirror!) on the wall...
Who is the top choice of them all?
There was a rumble dumble,
Five minutes it lasted.... the mirror said,
(you are you concieted bastard!).
Yo that’s true, that’s why we never have no beef,
So then I washed off the soap and brushed the gold teeth.
Used oil of olay cause my skin gets pale.
Then I got the files, for my fingernails.
True to the style on my behalf
I put the bubbles in the tub so I could have a bubble bath.
Clean, dry, was my body and hair,
I threw on my brand new gucci underwear.
For all the girls I might take home,
I got the johnson’s baby powder and the (polo colonge).
Fresh dressed like a millions bucks, threw on the valley shoes
And the fly green socks.
Stepped out the house, stopped short, oh no!
I went back in I forgot the...
Then I dilly (dally) ran through a (alley),
Bumped into my old girl (sally) from the (valley).
This was a girl playing hard to get
So I said what’s wrong? cause she looked upset
She said uh, (it’s all because of you)
Say what? (I’m feeling sad and blue)
She said what? (you went away)
And now, my life is filled with rainy days.
And I love you so, how much you’ll never know.
Cause you took your love away from me.
Now what was I to do
She was crying over me and she was feeling blue
I said, don’t cry, (dry, your eye)
Here comes your mother with those two little guys
Her mean mother steps and says to me (hi!)
Hit sally in the face and decked her in the (eye!)
Punched her in the belly, and stepped on her (feet)
Slammed the child on the hard concrete
The bitch was strong, the kids was gone.
Something was wrong I said what was going on?
I tried to break it up I said, stop it, leave her
She said, if I can’t have you (she can’t either)
She grabbed me closely by my socks
So I broke the hell out like I had the chicken pox
But uh, she gave chase, she caught up quick
She put a finger in the face of mc rick, and said
So we can go cruising in my oj, and what?
I’ll give you all my love today.
What? ricky ricky ricky what?
Somehow your words just hypnotize me
And I just love your jazzy ways
Yo mc rick my love is here to stay
And on and on and on she kept on
The bitch been around before my mother’s born
I said, cheer up! I gave her a kiss
I said, you can’t have me I’m too young for you miss
She said, no you’re not, then she starts crying
I says, I’m thirty-four, she says, (stop lying!)
I said, I am -- go ask my mother
And with your wrinkled pussy, I can’t be your lover!
To the tick tock and you don’t stopf
To the tick tick ya don’t... hit it!