HAS ANYONE OUT THERE SEEN THIS?

One of the most entertaining genres in all of film is that of fucked-up kiddies movies, flicks dumped onto matinee screens where parents could drop off their little dears for a few hours and escape to sleep, down a few tumblers of Wild Turkey or get their hump on, secure in the knowledge that the wee ones would have plenty of G-rated pap to keep them occupied. I saw plenty of such matinees as a wee one and came out of them pretty much unscathed, but for every "name" movie we got to see, such as THE SEVENTH VOYAGE OF SINBAD or KING KONG ESCAPES, we'd have to endure such dreck as JOURNEY TO THE CENTER OF TIME, THE WILDERNESS FAMILY, DIGBY: THE BIGGEST DOG IN THE WORLD (perhaps the most unintentionally ironic title ever), the infanous SANTA CLAUS CONQUERS THE MARTIANS and MATILDA. So there were really only two extremes to be had at these kiddie matinees, the good or the mediocre/flat-out awful, but every once in a while we'd get some unclassifiable oddity that both expanded our tiny minds and creeped us out more than just a little. That rare group included GULLIVER'S TRAVELS BEYOND THE MOON, ALAKAZAM THE GREAT, PLANET OF THE APES — which was not a kiddie movie by any stretch of the imagination, but it was rated G so it turned up at a very memorable matinee during a rerelease — , WALKABOUT — also rated G, but containing a full-frontally nude Jenny Agutter at age twelve — , THE LITTLE SHOP OF HORRORS (the 1960's original with those horrifying plant fiber heads at the end), and several others, but the most memorable of this lot were the strange, live action foreign imports.

Hailing from the Soviet Union and other then-somewhat mysterious lands, the foreign kiddie matinee onslaught were had for cheap by American distributors and uniformly featured terrible dubbing that only rendered the movies more entertaining in many cases. THE DAY THE EARTH FROZE, THE MAGIC WORLD OF SINBAD and THE SWORD AND THE DRAGON provided lysergic fodder for the tykes, providing what was for many of us our first glimpse into Russo-Finnish myths and legends, but by far the weirdest (and cheapest) of the imports were the works of Mexican schlockmeisters, more often than not dragged across the border by distributor K. Gordon Murray. Murray brought us such classics (?) of horror as THE WRESTLING WOMEN VS. THE AZTEC MUMMY, SAMSON VS. THE VAMPIRE WOMEN, NIGHT OF A THOUSAND CATS and the deliriously weird and unforgettable THE BRAINIAC, but he is perhaps best remembered for unleashing a shitload of fairy tale pictures whose bizarro visuals scarred many children for life. PUSS 'N BOOTS, LITTLE RED RIDING HOOD, RUMPELSTILTSKIN, and the balls-out warped SANTA CLAUS are all of note for their borderline-hallucinatory imagery, but the one I never got to see was 1964's LITTLE RED RIDING HOOD AND THE MONSTERS, a film that by all accounts is the STAR WARS of this dubious genre (NOTE: by that I mean the original STAR WARS from 1977, not one of the current cinematic ass-fuckings). 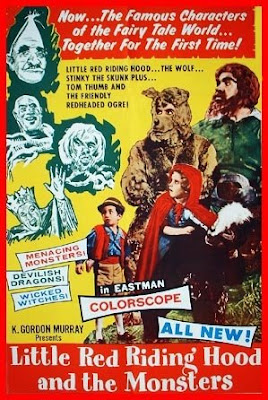 I've seen the trailer for it and was astounded by its parade of "did I eat the brown acid?" weirdness, a gallery of disturbing shit that makes me long to see the actual feature. I mean, just look at some of the stuff it has to offer: 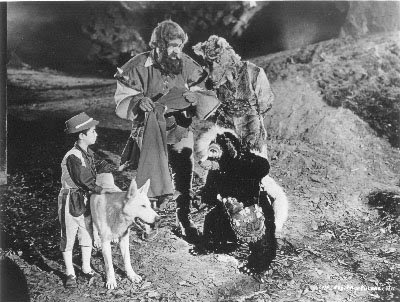 Tom Thumb, an ogre, a Brothers Grimm-style wolf, and a dwarf in a skunk getup. 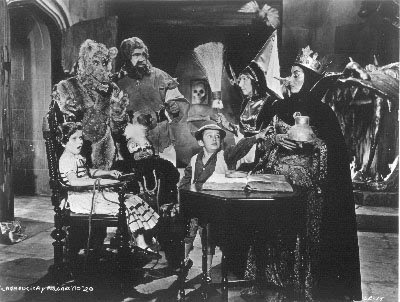 The heroes in mortal danger, deep within the fortress of "the Queen of Badness" (who is surprisingly not portrayed by Pam Grier or Tamara Dobson). Sheer, indescribable nightmare fuel in the form of hideous freaks who looked like they escaped from a Ramones album cover. 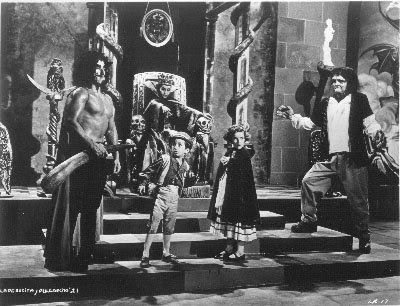 This looks not too far removed from nearly any given Ken Russell movie, especially LISZTOMANIA (1975), and if I didn't know otherwise this could be a scene from KEN RUSSELL'S THE GREAT GATSBY. 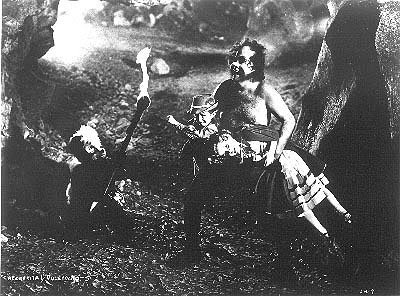 The skunk-dude fends of a monster attempting to make off with Tom Thumb and Little Red Riding Hood in a scene that looks like an outtake from HAXAN (1922). 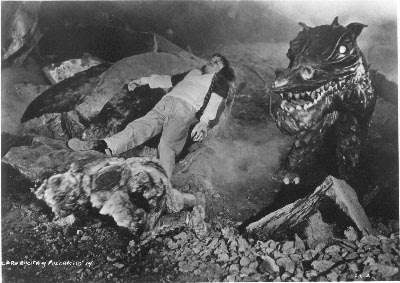 A fearsome dragon. Hey, if it's got giant monsters in it, I'm fucking there! 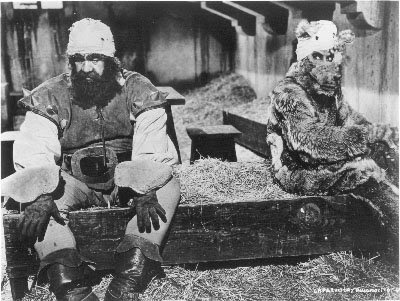 What could be the worst "morning after" situation on record. 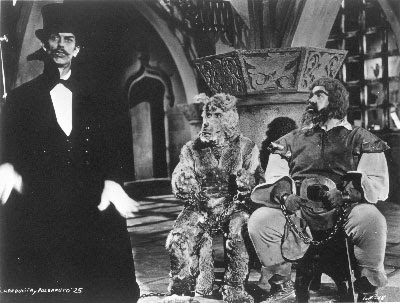 A totally pimped-out vampire.
Have any of you out there in the internet etehr seen this flick? I think you can see why I'm interested in checking this one out, and I intend to snag a copy next payday. You'd better believe me when I say I'll review this bad boy ASAP! 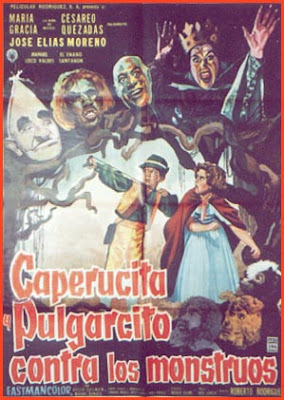 We actually watched this at a sleazefest a couple of years back, or rather...tried to watch it. It's amusing in a holy shit, jaw-dropping kind of way, but it wears out its welcome pretty quickly. Still, it's a must-have!