HOLY SHIT: "DECEPTION OF A GENERATION" 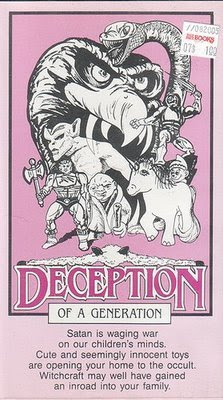 I just got my grubby mitts on "Deception of a Generation," an unintentionally hilarious Christian scare show from the mid-1980's, and believe me when I say it simply has to be seen to be believed. It was part of a series of exposés on such threats to good Christian values as rock 'n' roll, marijuana and Dungeons & Dragons, only this time around the focus was on the Satanic influences found in media directed at children, all apparently part of a concerted effort to indoctrinate unwitting kiddies into the ways of sorcery and acceptance of alternative lifestyles.

An installment in the Eagle's Nest Ministries' video series, "Deception of a Generation" is hosted by Gary Greenwald, an earnest Bible-thumper whose outraged conviction is matched only by the sheer lunacy of the claims made by his guest, fellow Christian Phil Phillips, whose hair looks like it was crafted from polystyrene, an aspect that when coupled with his disturbingly childlike face makes him look like a live-action, grownup version of Davey Hansen from the old Christian claymation TV series DAVEY AND GOLIATH. 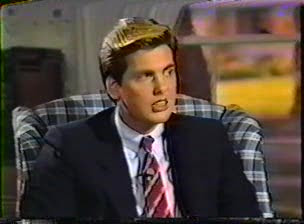 Phil Phillips: what happened to Davey when Goliath inevitably died.


Phillips recounts that during his ministering God spoke to him and ordered him to go on a fast; this fast went on for some two weeks, and during the course of it Phillips wandered into a toy store and was appalled by the "occultic" items being purveyed to children in the supposedly harmless guise of toys linked to syndicated cartoon shows. Bearing witness to a perceived Apocalypse in Toys "R" Us, Phillips launched wholeheartedly into a crusade to make parents aware that the insidious influence of "new age" and other demonic forces had entered their households via daily cartoon shows, shows he was convinced were intentionally "programming kids to evil," "transforming their minds" and leading children to worship TV characters when they should be worshipping God. This crusade unearthed many points of interest and import that opened my eyes to the following: 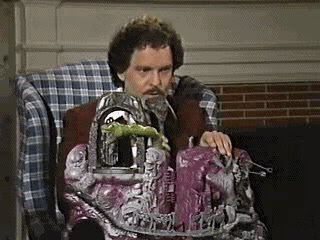 Gary Greenwald demonstrates the obviously Satanic influence of the Snake Mountain playset, hilariously howling "SKELETOOOOOOR!!!" into the "voice-changing" snake microphone. (I don't know about what you think, but this looks to me like some acidheads poured multi-colored candle wax over a Mousetrap game.) 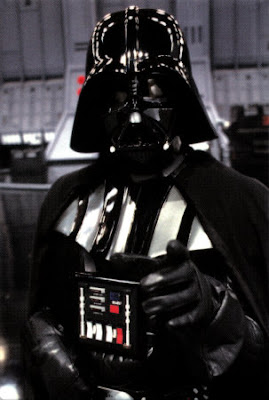 Darth Vader, lapsed Jedi and lord of the Sith... 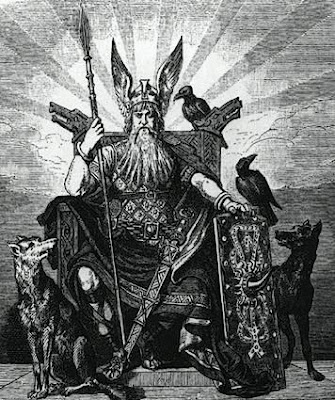 ...and Odin, chief of the Norse gods. The similarities are staggering!

There's a ton more of such info in this fully-loaded hour and a half — including an incredible tale of a family whose son became a balls-out delinquent thanks to getting into Dungeons & Dragons, and when his parents threw his gaming dice into the roaring fireplace the dice reportedly screamed as the evil spirits within them were cleansed by fire — and at the same time that the wild and totally unsubstantiated claims made by Phil Phillips are occasionally laugh-out-loud ridiculous, it's also rather saddening to see both Phillips and Greenwald being thoroughly convinced that this stuff is 100% on the money, sharing these imbecilic beliefs with the general public and consequently coming off like they're both bullmoose insane. I'm absolutely certain that they were both well-intentioned, but, ironically, it's long been said that the road to Hell is paved with good intentions and if that's the case these two have much to think about.

That said, this DVD — actually a somewhat ratty VHS tape transfer — was worth every cent I paid for it, and could cause death-by-laughter if the person or persons watching it are stoned/drunk enough, so TRUST YER BUNCHE and proceed with caution.
Posted by Bunche (pop culture ronin) at Thursday, August 07, 2008

Gary Greenwald was my absolute FAVORITE thing to watch in high school. Had I been dropping acid at the time -- as I did plentifully later in life -- I would've made sure to park my ass in front of the TV and watch the Eagle's Nest while tripping. I just remember him saying, "She was listening to a song called 'Another One Bites the Dust' by the rock band Queen, when she thought to herself, 'I've decided to smoke marijuana.' And what is the band saying when you play the song backward? Listen for yourself..."

I think the funniest item there involved the blue queers of Smurfland. The whole thing, though, seesm to be designed to drive kids toward Satan, on the grounds that Christ turns you into a babbling idiot.

Seriously - if YOU were the Corrupting Lord of All Evil, would you rather have kids shouting "By the power of Grayskull!" or have their parents living in abject fear of everything while fasting away their common sense and sending their money to the likes of Gary Grenwald awaiting the end of the world?

ref. That guy's hair is great!
I've got a two-tape anti-rock & roll video screed called "Hell's Bells" that you should check out some time. Along with the usual satanic suspects like Ozzy, Sabbath, Priest, Crue etc., it has lots of lesser known bands in there like XTC. here's a link
http://www.youtube.com/user/HellsBellsRockMusic

If I ever get caught trying to worship the Pagan god Snarf, please consider it a request for euthanasia.

Gary Greenwald didn't note something else in The 13 Ghosts of Scooby-Doo: the Hispanic rascal Flim-Flam (a co-star with Norville Shaggy Rogers, is a dark magician!

I grew up in a fundementalist Christian family. My mother and brother used to watch this show on the television. Hearing that sh!7 really screwed me up as a child. My mother must have believed Greenwald's sh!7 because transformers were bannned from our house because my crazy 4ss mom did like the the name Decepticon because it implied deception. I was only about 10 years old at the time I heard this guy. This and other Christians like him, like Bob Larson, James Dobson, are truly abusers.

I am in the ministry. A conservative (by labeler's accounts)Christian. These two fellas are off their nut.

My pops let me watch all this cool fan boy rubbish. I've never had a criminal record, never cheated on my wife, and have never once decided to sacrifice an animal or human to Smurfette. Care Bears are satanic because they teach children to talk out there problems? Thats mental health 101....not the occult.

I played D&D when I was a teen too. If even an iota of this were precursors to deviant behaviour--I should've been coloured a serial killer long ago.If they realized that all this stuff is imagination (which is what there real problem is with)they would be happier people and not walk about attempting to ruin kids' lives.

My brother in law bought into this crap and banned his kids from TMNT. He had a fit when I bought his kid a Godzilla figure for his birthday. Its kids stuff.