IN MY ROOM: THE ORIGINAL VAULT OF BUNCHENESS

I'm currently at my mom's house for Christmas and I can't help but get a bit nostalgic for the days of my misspent youth whenever I stay in what used to be my room during those coming-of-age years. So without further ado, here's look at the converted garage that served as my room during my high school years, breaks from college, and the year and a half in which I attempted to eke out a freelance art living before moving out for good in early 1990 and making my home in New York City. The place was the site of several significant life events, but it is virtually unrecognizable now. 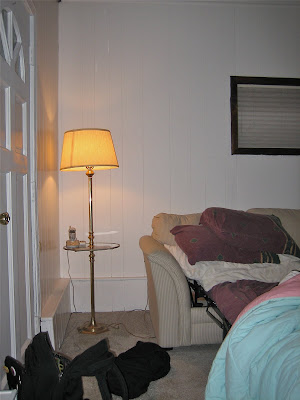 Where that lamp and bed are is where my desk/bookcase used to be. The walls used to be festooned with movie posters, comics in mylar bags, and several vintage PLAYBOY centerfolds some of the early-'80's most zaftig Playmates. All I have to say about that last element is Karen Price, Miss January 1981. Yowza!!! 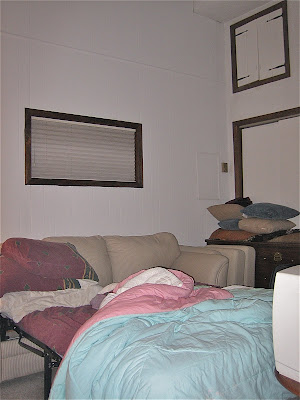 The medieval torture implement that passes itself off as a foldout couch. Quite far removed from the extremely comfortable frameless double-mattresses I slept on in here three decades ago. When I come home for visits, the morning after the first night I sleep on this fucking thing invariably results in an agonized lower spine. 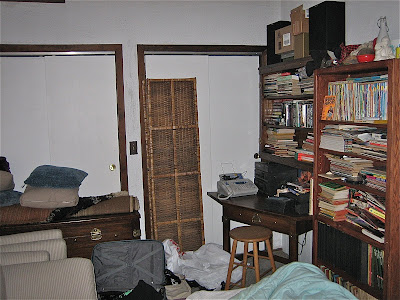 All that remains of what was once a massive media library that I maintained from August of 1980 through when I moved out for good in early 1990. The bookcase/desk has been in my possession since 1973 and was great for storing comics and books. (The chair that came with it fell apart some twenty years back.) 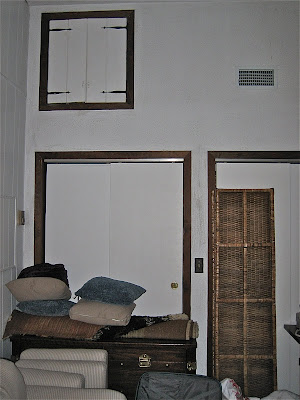 The lowest point of the double door on the high wall is about eight or nine feet up from the floor, high enough to thwart my mother's snooping during my coming-of-age years. I'm not certain but I think there's still a suitcase up there that contains a couple of homemade bongs and water pipes. If it's still up there, that suitcase has not seen the light of day since the infamous "Weedfest" of the Summer of 1989.

Open that door and let the light spill in!

Always strange being in the old Westport house. Did it a few nights this weekend - the kid sleeps in my old room, we sleep in my sister's old room. Never did fully adjust.

My folks erased almost all traces of my existence as soon as I moved to Boston. Can't blame them.