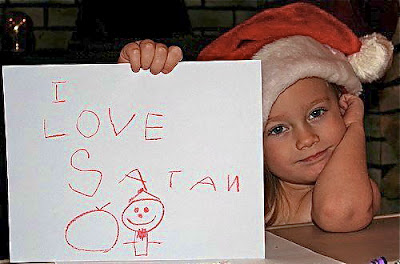 Yes, dear Vaulties, it's that time of year again and another Christmas CD has been concocted to counteract the annual force-feeding of treacly yuletide ditties that send me into a murderous state of apoplexy. The lineup hasn't changed much over the past couple of Christmas seasons, largely due to me not having found any new entries that really got me going, but many of the old perennials deservedly remain. In case you want to track all this stuff down online and download them for yourself, here are this year's selections:
Santa Says... -Spine Punch
Christmas Is A-Comin'- The Shitbirds
Santa Claus Is Coming to Town-John Spence
Frosty The Dope Man-Knock Out
We Wish You a Hump At Christmas-Ron and the Rude Boys (a very filthy bunch of Brits)
Lick My Balls-Dirty Christmas Project A Drunk And Horribly Inappropriate Christmas
Merry F'n Christmas-Denis Leary
Feliz Navidad-Christmas With Beer
Don't Mess With My Tequila-Backstreet Girls
My Mother Gave Me A Gun For Christmas (Waltz Version)-Pork Dukes
Jack Shit- John Valby
A Wee Little Christmas Ditty-Drunken Stupor (this is the one about drunk driving)
A Christmas Warning-El Privates (in which women are considerately advised to expect getting raped this holiday season...?!!?)
Can I Please Crawl Down To Your Chimney?-Kenne Highland & His Vatican Sex Kittens
Homo Christmas-Pansy Division (exactly what it sounds like and catchy as hell)
Tiny Tim's Revenge-Knock Out Christmas
Christmas is a Pain in the Arse-The Accelerators
Deck The Halls-The Kickin' Kazoos (an incredibly annoying all-kazoo rendition)
Fuck You Santa Claus (Eat Shit Santa Claus)-Filthy Elvis
You Ain't Gettin' S*** For Christmas -Red Peters
We Wish You A Merry Christmas-Aaron Tucker (as Arnold Schwarzenegger)
Christmas When You're Dead -Ralph Sinatra (sung from the POV of Frank Sinatra's corpse)
I'll Be Stoned For Christmas-John Valby (perhaps the most honest Christmas song ever recorded)
Daddy Drank Our Christmas Money-TVTV$ (yes, the dollar sign is supposed to be there)
A Merry Jingle-The Greedies
Merry Fucking Christmas-Mr. Garrison
Meth Lab Christmas-Acoustic Front
Anal Beads-Dirty Christmas Project (the gayest version of "Jingle Bells" imaginable)
Christmas With Bazooka Joe-The Fleshtones (this one gets extra points for originality/incongruity)
The Most Wonderful Time in your Rear-Dirty Christmas Project
Feck Off You Drunken Gentleman -Ron and the Rude Boys
Stomping Through A Pillaged Wonderland-Vykyng
Death to the World-Mike Puccio (from the album "Zombie Christmas")
Fuck Christmas-Eric Idle
Donny the Retard-Larry The Cable Guy
Posted by Bunche (pop culture ronin) at Thursday, December 01, 2011

I actually remember listening to "Frosty The Dope Man" on commercial radio back in the early 90's.