It's been a long while — approximately five months, to be precise — since my last look at what's currently out at the comics shops and frankly there has not been much worth discussing during all that time, so let's get back on track and start things off with what gets my vote as Book of the Week (and maybe of the year). 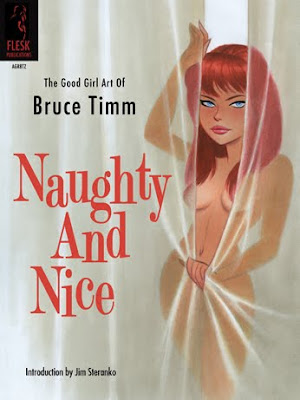 Warner Brothers animation wunderkind Bruce Timm is honored with the stunning NAUGHTY AND NICE: THE GOOD GIRL ART OF BRUCE TIMM, a hefty coffee table book of his hot chick art from Flesk Publications. I'm a sucker for even the most minor of Timm's artwork, so this huge festival of pulchritudinous eye-candy is like a gift for the gods. The paperback edition goes for fifty bucks in stores and the deluxe slipcased hardcover edition is a hundred bucks, so it was too pricey for me to pick up today but a brief perusal of it has me saving up for the deluxe. Simply put, it's fucking beautiful and a must-have that belongs on any serious comics and animation design fan's bookshelf immediately. The paperback's available on Amazon for nearly twenty bucks less than in stores, and the deluxe edition, as far as I'm aware, is only available in comics shops. HIGHEST RECOMMENDATION 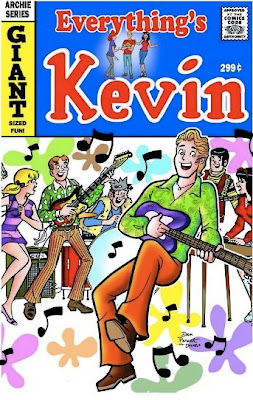 The inaugural issue of KEVIN KELLER is out, so hit the comics shops and show your support of there finally being an out gay character in the Archie soap opera of "typical teen" shenanigans. It's nothing earthshaking in its content, but Kevin's definitely welcome for being written as just another Riverdaler, albeit one who just happens to be gay. An amusing segment features a nervous Kevin about to go on his first date, and he makes the mistake of taking fashion advice from that douchebag Reggie. Seriously, it's just the latest bit of evidence supporting the need for Reggie's public execution. Just be aware that there are a couple of covers for this, as well as a hardcover collecting Kevin's introductory appearances. Man, Archie dating a black chick, homosexuals running around... Welcome to contemporary America, Riverdale! About goddamned time! 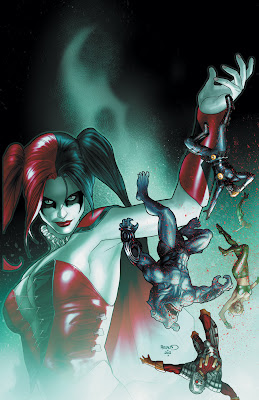 This series is one of the handful of "New 52" series that I haven't surgically excised from my monthly reading like some form of four-color cancer, but it's taken a while to fully click. This latest installment is highly recommend for being the first issue of the relaunched series that really fires on all cylinders, and its segment giving the preamble to the New 52's version of Harley Quinn's origin features excellent scripting by Adam Glass. The one universal complaint about this that I also share is the dislike of Harley's current design, which takes her away from her conceptual roots as a mad harlequin and in the process makes her very name make no sense. There's nothing about her look that in any way says "harlequin," and instead she looks like another of the legion of generic punker/Goth chicks who infest Manhattan's Lower East Side. However, by this point I've accepted that we're stuck with it, so I just ignore it. But whatever the case, this is one of the few New 52 books that I'm sticking with.

WOLVERINE AND THE X-MEN #5 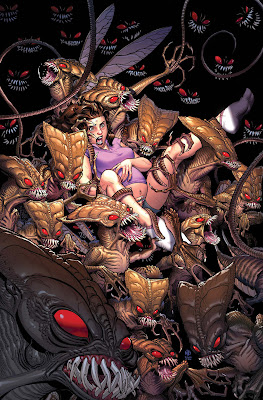 This issue continues a streak of fun that marks the first time I've read a monthly X-Men book regularly in over twenty years. (I have read some of the significant arcs from the past two decades but only once they were collected, and much of that stuff did not merit buying on a month-to-month basis.) The current status quo finds Wolverine the unlikely headmaster of the Jean Grey School for Higher Learning (Jean's apparently dead, again, and the school was built in honor of her memory) and the place is swarming with an assortment of oddball mutant and alien students. The series is lighter in tone than usual convoluted mess that's been the inter-connected X-saga for the past two decades or so, and that's only a good thing. It's funny, character-driven, and earns extra points for the exceptional art by Nick Bradshaw and Walden Wong. At a time when many of Marvel's books are visually uninspired or straight-up ugly to look at, good art is to be appreciated, and exceptional art even moreso. HIGHLY RECOMMENDED. 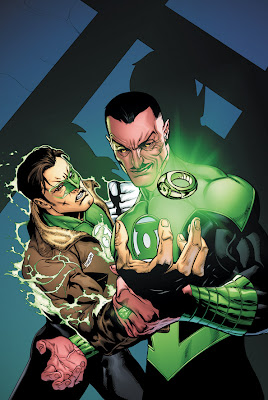 A mediocre issue with inconsistent but largely bland art by Mike Choi. To be fair, five straight issues of Doug Mahnke will spoil anybody, but with Geoff Johns' scripting on this series pretty much spinning its wheels in various not very engaging ways, dull art is not exactly what this book needs. I've championed what Johns was doing on GREEN LANTERN from the moment he took the reigns through to the end of the Sinestro Corps War arc, but it's been apparent ever since that Johns seems to have mostly run out of ideas and only occasionally allows sparse moments of brilliance to shine through years' worth of middle-of-the-road filler and occasionally outright crap like the much-maligned "Skittles Lantern Corps" mess. With his duties within DC's administrative infrastructure presumably eating up a lot of his time, as well as scripting AQUAMAN, it may be time to turn this series over to some fresh talent...

Lastly comes this specialty item that may or may not be available at you local comics shop, depending on whether they chose to order it. 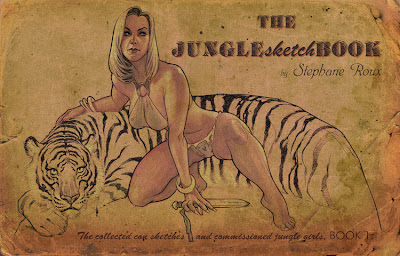 The uber-talented Stephane Roux has released this small sketchbook featuring seven portraits of assorted sultry jungle girls, and since I'm a huge fan of Roux's art and also of jungle girls, this convention-style sketchbook is a win-win. RECOMMENDED.
Posted by Bunche (pop culture ronin) at Thursday, February 09, 2012