My autograph collection just expanded a bit, and the three latest additions are sheer geekin'-out gold.

THE AVENGERS is one of the classic cult TV series from the 1960's spy craze, earning its place in pop culture history for introducing the badassed female to the screen, and for its eccentric, veddy British quirkiness/surreal aesthetic. Anchoring the show throughout its run was Patrick Macnee as foppish gentleman secret agent John Steed, a charming, urbane, witty bon vivant who was the antithesis of government-sanctioned school bully with a license to kill, James Bond. Admittedly something of a caricature of complete and utter Britishness, Steed was a breath of fresh air to American audiences who had never before seen his like, and to me he was the greatest of all the '60's super-spies. Bond may have gotten more pussy than a litter box, but Steed was the one who could offer a companion quality conversation spiced with a genuinely dry sense of humor without Bond's decided mean streak. Capable, smart, and classy almost to a fault, John Steed was — and is — my kind of hero, so I felt it was finally time to write to Patrick Macnee and express my admiration for his work in general and for Steed in particular. Macnee is getting on in years (he's 90 years old as of this writing) and I figured my window of opportunity was rapidly closing, thus I sat down and composed what can best be described as a well-worded gushing love letter to Steed and the man who played him. I then went to Macnee's website to order one of his personalized autographed 8 x 10's and sent the letter along with my request. About a month later, this treasure arrived in the mail: 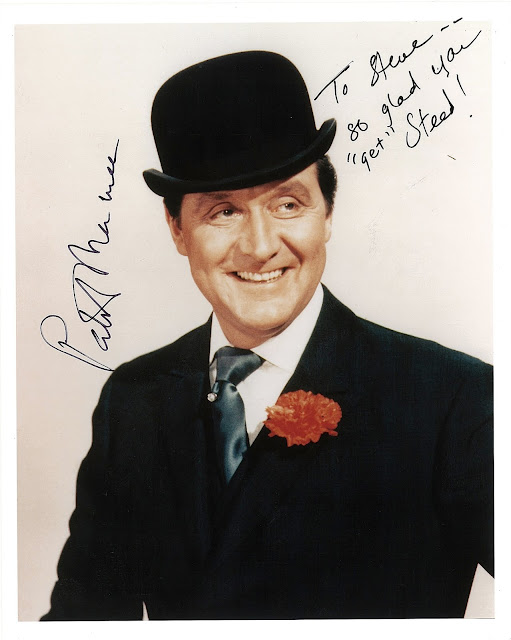 There's really nothing more to say, other than that you cannot imagine how happy I was to receive it and one of these days I'll have it professionally framed for proper, honored display.

THE AVENGERS hit the British airwaves in 1961 and its first year was by most reports a fairly routine pre-007-craze espionage/crime thriller (nearly all episodes from the first year are now lost forever due to British TV studios' then-common shortsighted policy of wiping the videotapes for re-use as a cost-saving measure), at first featuring Ian Hendry as Dr. David Keel, a man out to avenge the murder of his fiancee (hence the show's title) by a drug ring, an organization that happened to be in the sights of mysterious secret agent John Steed. When the show entered its second year, Dr. Keel was gone and Steed became the protagonist, aided by a few rotating partners, the most notable and culturally influential of which was Mrs. Cathy Gale, played with focused, icy menace by Honor Blackman. Mrs. Gale was an expert shot and equally adept at judo, and the British public took to her leather fetish wear-clad badassery with surprising earnest. Much as Steed served as an answer to 007's darker aspects, Cathy Gale provided a then-shocking opposite number to the era's generally-held notions of the "proper" English lady. Poised and classy as hell though she was, Cathy took no shit from anyone — not even Steed — and you just knew she was the baddest person present when she walked into the room. Mrs. Gale rocked the U.K. airwaves for two years before Honor Blackman departed for other things (more on that shortly) but during her stint on the series, Cathy defined THE AVENGERS' "tough woman in cutting edge/borderline kinky fashions" archetype and, in my humble opinion, both Emma Peel and Tara King, who served as Steed's partners after her departure, had a very tough act to follow. It may seem like blasphemy coming from me, but even the great Emma Peel pales in comparison to Mrs. Gale's hard-edged womanly sexiness, and I'm not even particularly into blondes. That said, due to her historic importance and simply because she's my favorite of the women who helped John Steed plant a British boot right up the arse of crime and nation-threatening espionage, I had to send off to the U.K. for Honor Blackman's autograph before it was too late. (Like Macnee, Blackman's a respected elder thesp, in her case currently aged 86.) 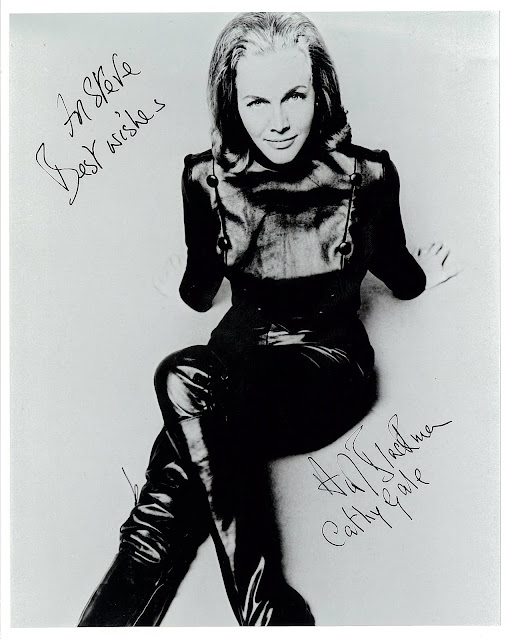 And, in a career move that broke her audience's collective heart while simultaneously ensuring her screen immortality and gaining her new fans worldwide, Honor Blackman left THE AVENGERS at the height of her popularity to take the indelible role of dykey flying circus leader and henchwoman to a mad criminal mastermind. I am of course talking about the one and only Pussy Galore in the James Bond classic GOLDFINGER (1964). If I need to explain any further, what are you doing reading this? Get offa yer ass and rent GOLDFINGER immediately! Anyway, while I had Miss Blackman's attention, I figured I should also spring for a this great publicity shot of her as Pussy Galore. 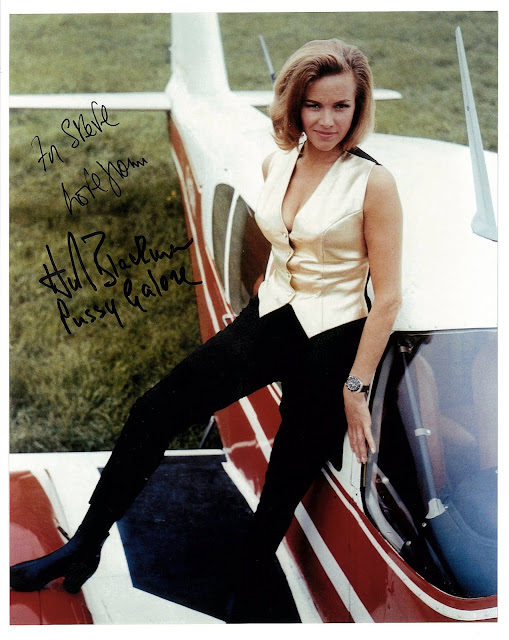 Sheer butch elegance, and receiving this photo put a huge and happy grin on the face of this lifelong James Bond junkie. Ah, the satisfaction of geekery rewarded...
Posted by Bunche (pop culture ronin) at Tuesday, July 31, 2012

you are correct Sir! Except that The Avengers was broadcast on ITV ,Independent Television, not the Beeb. Just to confuse things more, it was an ABC production.

Sam, I thank you for the correct. It has been noted and applied.

That's great. I also loved Steed and Mrs. Peel and now being older would love to revisit the classic series. I wonder if its on Netflix. So glad that you got the signed photograph.

Being about the same age as you, I also loved the British Avengers series. I also have a soft spot in my heart for Macnee not only for his spot in Spinal Tap but also for his early, *early* turn as a young Jacob Marley in the best (in my opinion, anyway) version of A Christmas Carol - England's 1951 Scrooge starring Alastair Sim. My DVD copy has Patrick Macnee introducing the film. I wonder if he is the only survivor remaining of that film.