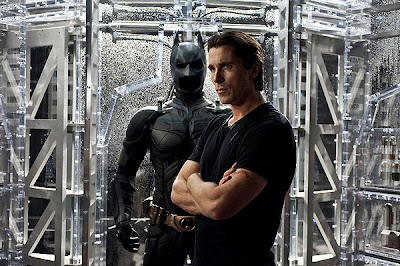 I went to see the latest Batman movie, THE DARK KNIGHT RISES — oh, how I wish someone would call a moratorium on the use of any permutation of the word "rise" in movie titles — at Manhattan's Ziegfeld theater last night, and I was certain whatever merits the film may have possessed would be canceled out by a dire pall being cast over the whole thing in the tragic wake of what is now being rather crassly referred to in the media as "the Batman Massacre" or "the Dark Knight Massacre."
As reported all over the news yesterday (and on this blog), a 24-year-old madman by the name of James Holmes launched a senseless armed assault upon an audience that had settled in for the midnight screening of the film in a mall in Aurora, Colorado, and his attack resulted in the confirmed shooting deaths of at least twelve people (some reports state a count of fourteen) and the injuries of between thirty-to-fifty, some of which are critical. As a reaction/preemptive measure against possible copycat incidents, NYC police commissioner Ray Kelly order deployment of an augmented police presence at theaters running the film in the Five Boroughs (there were two cops in attendance at the show I saw), and as a result the audience entered the theater with the tragedy of the shooting reinforced. The atmosphere was an odd blend of enthusiasm over a new Batman film and foreboding due to the inevitability of considerable gun violence in the narrative, and there was even a fat, bespectacled geek — who, because of his pronounced girth, was referred to by my friend Suzi as "the pregnant guy" — with poor social skills and a borderline-Moe Howard haircut on line behind me who cringe-inducingly attempted to lighten the mood by telling those who were buying to tickets that they could now "get on the line to be shot." Those within earshot all turned to him in stunned silence, with facial expressions that quite clearly communicated, "SERIOUSLY, dude?!!?" (He shut his fucking mouth after that.) Anyway, the audience nonetheless remained enthusiastic as the lights dimmed.
This time around, it's eight years after the events of the previous installment and Bruce Wayne (Christian Bale) has become a recluse, semi-hobbled by his injuries and making his way around Wayne manor with the aid of a cane. After having defeated the Joker and allowing himself to falsely take the blame for the death of Harvey Dent, Wayne retired his Batman persona and his state of emotional limbo greatly troubles his ever-faithful butler, Alfred (Michael Caine). But Wayne is shaken out of his complacency when cat burglar Selina Kyle (Anne Hathaway) ingeniously manages to break into the family safe and steal his mother's pearl necklace. That event ignites Wayne's curiosity as to why Kyle would be after the pearls, and what he discovers brings him into direct conflict with gravel-voiced mercenary/terrorist and extreme badass Bane (Tom Hardy), who engineers one of the most audacious and dire schemes this side of one found in one of the better James Bond movies. But exactly why is Bane doing what he's doing, and what the hell does any of this have to do with anything? I won't tell you any of the whys and wherefores, other than to say that by the time the credits roll, we get to see Bruce Wayne face his greatest challenge to date, one that it is extremely — and I do mean EXTREMELY — unlikely he will survive...
I'm a lifelong fan of the Batman character and his adventures in the comics and on television, but I never had any love for the live-action movies featuring him, largely because I felt they lacked the element of fun, felt far too overblown, and seemed cold in such a way that I didn't give a damn about any of the characters. The Tim Burton installments were super-hyped examples of his usual stylistic masturbation and the two that followed his films were justly lambasted, with the latter of the pair, the infamous BATMAN AND ROBIN (1997), frequently and deservedly cited as one of the worst major motion pictures ever made. Then came Christopher Nolan and his grittier, more "realistic" take on the Batman and his world, and critical acclaim, blockbuster box office success, and audience adoration followed. That said, I know I'm in the minority because I myself found Nolan's Batman films to be over-long and boring, plus once again cold and characterless (though I did like Heath Ledger's take on the Joker), so I approached THE DARK KNIGHT RISES with absolutely zero expectations, seeing it solely so I could join in the inevitable discourse on the film from an informed viewpoint. Thus it is that I'm quite shocked to have enjoyed the film rather a lot, and I proclaim it the only live-action Batman film that I genuinely like. To me, that is a minor miracle.
I would love to discuss the film in more detail but to do so would mean giving away several very major plot surprises, so I'll just have to ask you to trust me on this one. What I can say is that Bane's terroristic shenanigans had me actively wondering throughout the film just why he would give a shit about what he was doing, and after things looked like it was another case of lazy writing that expected us to simply say "Oh, he's just doing this because he's crazy" and just accept it as rote, the final act happens and everything falls perfectly, satisfyingly into place. At the moment when it all finally made sense, I swear it felt like something physically clicked in my head, and that realization made me smile from ear to ear. As a very finite end to Christopher Nolan's Batman trilogy, THE DARK KNIGHT RISES succeeds quite admirably. I obviously recommend checking it out, but in closing, here are a few points worth noting: 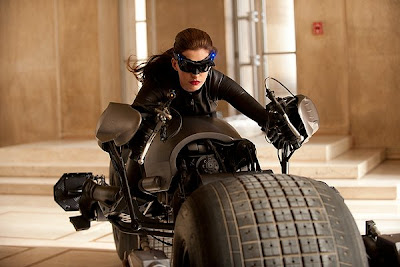 I like Hathaway in certain roles, but I had grave doubts about how she would handle playing a character who's sexy, seductive, and more than a bit of a badass in the butt-kicking department. I should not have worried, and I found her version of the character to be the most interesting femme fatale yet seen in a Batman film.
And perhaps the most important point I would like to make is that THE DARK KNIGHT RISES is less of a straight-up Batman film than it's a cops-versus-terrorists summer blockbuster action movie that Batman pretty much incidentally happens to be in. You could eliminate every Batman-specific element from the script and change the hero's name to "Jack Action" and the end result would be the same and no less entertaining. Not exactly a gripe, but worth making note of.
Lastly, after this film there will inevitably have to be another reboot for the batman franchise, and I'm curious to see in which direction the series goes after the audience-pleasing tone set by the efforts of Christopher Nolan, Christian Bale, et al. Just don't forget to keep the emphasis on character and keep things fun, Warner Brothers! Don't subject Batman to the cinematic fist-fucking that MAN OF STEEL looks like it's going to provide for Superman. (The trailer ran before THE DARK KNIGHT RISES and, brother, it looked like ass.)
Posted by Bunche (pop culture ronin) at Friday, July 20, 2012

Great stuff, Bunche! This movie isn't my favorite in the series, as you know from reading my review, but you and I are in agreement on a lot of key points regarding it.

Great write up, Bunche. I just saw it a second time on IMAX (and not the crappy "faux-IMAX" ripoffs in multiplexes that annoy me to no end), and enjoyed it much more the second go-round.

I shared your reflex wincing during the automatic gunplay scenes, in light of the Aurora tragedy.

One of my favorite aspects was Nolan pulling off a tak on the "Batman Family" story convention so well. I grew up loving those 70s giant sized Batman Family books, but the awful Schumacher "Batman And Robin" had me dreading any such foray into the movie francise (though going in, I had no idea that Robin would make an appearance).

Man, you were my last hope since I always agree with your reviews and viewpoints. This movie was the worst. Long, boring, and just stupid. I'm really shocked you liked it. Cops living underground for 3 months dressed and ready to fight? Batman walks home and takes time to burn bat symbol on bridge? Everyone talks in long and self absorbed monologues? Gordon wrote all that shit down and had it in his jacket? Dear god....too much to write.

Sorry, Tobor, but I call 'em as I see 'em. And bear in mind that I may be the only sentient organism on this planet who does NOT worship at the altar of Nolan's Batman flicks, which may be why I enjoyed this as much as I did. It had more of a comic book feel to it, which is what I look for in my superhero movies, and which was almost totally absent from the last two Batman outings. That said, I very much doubt I will ever sit through it again. I enjoyed it, but once was certainly enough.