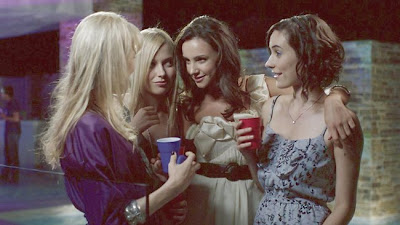 Taking the concept of "mean girls" to a new and particularly loathsome low.

It's dawn and pretty teenager Xandrie (Adelaide Clemens) is seen passed out on an Australian beach, possibly left for dead by a trio of her private school classmates consisting of amateur videographer Jono (Tom Stokes), 'roid-rager Brookie (T.J. Power), and uber-wealthy, handsome alpha male Zack (Alex Russell), who all drive away. It's clear from the nervous glances exchanged among the boys that something bad has taken place and the narrative flashes back a few days to provide the preamble.

Zack, Brookie, and Jono are the popular golden boys of their posh private school, star athletes on the swim team, and essentially a pack of male "Heathers" who control the school's social scene. Complete and utter dicks and bullies, the entitled trio are secure in the knowledge that they can get away with pretty much anything and fuck everyone and everything else. The odd man out in their group is Darren (Oliver Ackland), a quiet, nerdy computer whiz whose mother remarried to Zack's gazillionaire father, so Zack and Darren are mismatched at best, with Zack lording it over Darren while the latter pretty much has to endure his step-sib's shit (and the shit of Zack's friends, especially bully boy Brookie) as they live under the same roof.

At school, Xandrie seriously crushes on Darren and the feeling is most definitely mutual, so Xandrie gives her number to Darren and the pair agree to meet later at a huge party thrown by Zack at his father's house. (Zack and Darren's parents are never present; they are always away, apparently jet-setting, leaving the boys completely unsupervised for extended periods of time and with approved  access to Zack's dad's cash.) Observing the obvious attraction between Xandrie and Darren, Zack and his pals — including a couple of mean girls, one of whom fancies Zack and notices Zack's interest in Xandrie — decide to ruin the innocent romance before it even begins, simply because they can and also because Zack is a greedy, self-absorbed turd. At the massive party, drugs and booze flow freely and the alpha teens make sure Darren's path does not intersect with that of Xandrie. The mean girls find Xandrie and her friend Ella (Geraldine Hakewill), and feign kindness while giving the unknowing friends drinks dosed with ketamine, stating "Let's have some fun!" As the drug takes effect, Ella wanders off as Xandrie is corralled downstairs to a private space where the swim team jocks await. As the party dies down and guests depart, Xandrie passes out on the couch and the trio take turns raping her, which they capture on video. (The filmmakers had the good taste to strongly imply the event in such a way that leaves no doubt as to what occurred, but no nudity or graphic depiction of the rape is shown, thank god.) While this foul deed is done, a dejected Darren, who was physically prevented from going downstairs by the thuggish Brookie, drifts off to sleep.

The narrative then skips past the opening scene of Xandrie being left on the beach and focuses on Darren's growing concern when she does not show up to school for about a week. No one knows where she is and Xandrie does not answer the door when Darren shows up at her house. Not being an idiot, Darren realizes Zack and his goons raped Xandrie, so he sets out to find out exactly what happened despite repeated warnings from Zack and crew. The entire school takes note of Xandrie's sudden mysterious absence and all manner of rumors and theories are shared by the student body's social media, which shapes the public perception to paint Xandrie as an unstable "trash bag" who willingly serviced the boys, couldn't hold her liquor, was unable to face the humiliation of being a "slut," and consequently switched schools. Then Xandrie suddenly shows up again, seemingly as chipper as ever, which puts the alpha males and the mean girls on edge. But what is really going through Xandrie's head? What does Darren make of all of this? And can Zack really not care one whit about what he and his friends have done?

WASTED ON THE YOUNG takes what would easily be grindhouse material and handles it with an intelligent, classy arthouse approach that utterly drags the viewer into its sordid world of morality-free privilege and keeps us riveted with its ever-mountng tension. Zack is a monster of the lowest order, a casual sociopath whose lack of concern for anyone other than himself is simply appalling. He's one of the most hateful cinematic villains I've ever come across and I especially despise him because he very much reminds me of some of the worst examples of the privileged youth I grew up amongst in southern Connecticut, only writ heinously large for the screen.

Definitely not for all tastes but featuring fine performances, a taut and intelligent script by writer/director Ben E. Lucas, and a level of intensity that is at times blood pressure-raising, WASTED ON THE YOUNG never cops out, remaining unrelentingly bleak from start to finish and wrapping up the proceedings in ways that I genuinely did not expect. A simple garden variety revenge film it ain't, and I strongly recommend it for those who can handle a story that's so nasty that it doesn't need graphic nudity, violence, or gore to make it stick uncomfortably in one's memory. Upon absorbing the film, I was amazed that it didn't received a wide theatrical release here in the States, but when taking into account America's track record regarding high school bullying, the misuse of social media, and the ever-present spectre of armed reprisals in our schools, perhaps I shouldn't be...

Oh, and sometimes the dialogue is delivered sotto voce and can thus be hard to hear, so I recommend watching the film with the subtitles turned on so you don't miss any plot particulars. 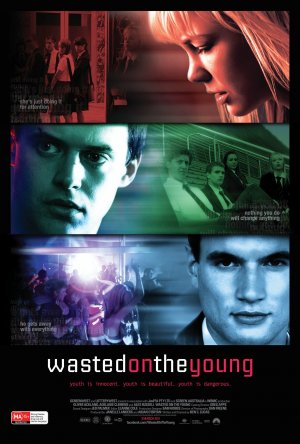