NOTE: This piece was originally published here ten years ago, on what was then the 30th anniversary. I re-post it in honor of the 45th. 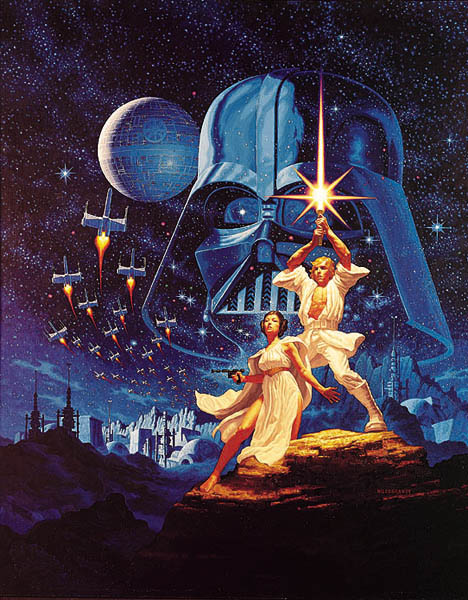 Remember when you were a little kid and your folks took you to the movies for the first time? I can’t speak for everyone else out there, but I still have clear memories of the first movie I saw in the theater, namely a now obscure animated feature called GULLIVER’S TRAVELS BEYOND THE MOON. I didn’t know at the time that it was a dubbed Japanese import, but I will never forget the feeling of having the movie theater’s Stygian blackness envelop me and remove me from the mundane world, placing me firmly in the fantasy world the flickered onscreen. The largeness of the space only accentuated my own three-year-old smallness in that big, cushioned seat, and being utterly sucked in by the storytelling made me feel a sense of magic and wonder unique to the movies for the first time in my life. For me, going to the movies was that most special of treats, and having proven to my parents that I could be well-behaved and sit spellbound, I went to a hell of a lot of flicks in those pre-VCR days, even attractions that were distinctly not for kids (THE GODFATHER and SERPICO immediately spring to mind).

My first favorite film was the lavish live action Disney version of 20,000 LEAGUES UNDER THE SEA (one of many influences that lead me to think of becoming a marine biologist, a field that I did not end up pursuing, but still study as an amateur to this day), eclipsed five years later by JAWS, and, yes, all those stories that you’ve heard about how it literally scared people off out of the oceans for years are absolutely the gospel truth (my mom tells me that after seeing Hitchcock’s PSYCHO in 1960 she was too terrified to take a shower if no one else was in the house for quite some time). Such was the power of cinema in the days before “films by committee.” But no movie-going experience before or since has utterly shaken me to the core as both a film fan and a human being as seeing the original STAR WARS on opening night in May of 1977, an event that occurred quite by accident.

My father had recently moved back to the New York area after nearly two years near Washington, D.C. (where I had visited him during the Bicentennial and we had seen the legendary INFRA-MAN as a first-run movie), and in one of our many vain attempts to foster any kind of real parent/child relationship we drove into Manhattan one evening, intent on seeing Woody Allen’s ANNIE HALL. When we arrived in the city, we were dismayed to find that every theater that had the movie was sold out for all shows that night and we were simply shit out of luck. We wandered about Times Square for some time, trying to figure out what to do next, when my dad spotted a movie poster outside the Astor Plaza for some film called STAR WARS. There were no people on line for it, and neither one of us was surprised by that since we’d never heard word one about it. Lacking anything better to do, my dad looked at me and said, “You want to give this a shot?” I said, “Why not?” and we entered the nearly deserted foyer. Once popcorn and sodas had been obtained, we took our seats among the roughly eighty people in the place. Soon the lights dimmed and we readied our selves for what would probably be another cheesy sci-fi potboiler (my parents may not have agreed on much, but neither of them ever forgave me for dragging them to see the horrendous Italian borefest WAR BETWEEN THE PLANETS). Assorted trailers came and went, and then the familiar signature tune and logo of 20th Century Fox pictures lit up the screen. Then the audio abruptly went silent and the screen went black, save for tiny blue letters that read, “A long time ago, in a galaxy, far, far away…”

A blaring musical sting exploded out of the speakers, swiftly cohering into a lush orchestral arrangement, as the camera pulled back on a massive star field to reveal the words “Star Wars.”

As the title faded further into the distance, a text crawl like those found in the old Flash Gordon serial chapter plays that my father loved during his youth set the scene for the audience. Then a multi-engined spacecraft hauled ass over the camera, firing blast after blast behind it, clearly in an attempt to shake off some pursuing menace. As the embattled cruiser flew into the horizon, the pointed white tip of an obviously bigger vessel loomed into view, itself returning volley after volley at its fleeing prey. And the huge, wedge-shaped ship loomed further onto the screen, giving a clue as to its massive scale. And it kept coming.

How fucking big was the damned thing???

With hugeness like that on display, all I could think of was that this is what a space opera helmed by Cecil B. DeMille would have looked like. And my initial perception was not far from the mark at all; the audience was dropped smack dab into a fully- realized universe of space fantasy, dripping with all manner of indescribable aliens, creatures, robots, spaceships, heroes — both competent and otherwise — lightsaber-wielding warriors, mind-boggling state-of-the-art visual effects, and an asthmatic black-clad villain whose helmet made his head look like a big cock. All of which got capped off with the most spectacular space battle ever seen on film up to that time. In short, everything a lad just a month short of his twelfth birthday would want to see, with the exception of some luscious boobies (which we kinda got anyway since Princess Leia was obviously unencumbered during her stay on the Death Star, especially when she was soaking wet in the trash compactor). When the credits rolled, the entire audience stood and cheered like zealots at a revival meeting.

Without knowing it, we had become the first generation of STAR WARS cultists.

Upon reaching the outer lobby I purchased the movie program and pored over every minute detail of the photos that would soon become familiar across the globe, and as my dad and I drove back to his apartment in White Plains neither of us said a word. We were both simply too stunned by the experience. When I returned to school in Westport that Monday, I ranted and raved like a religious fanatic about STAR WARS, and my sixth grade schoolmates looked at me as though they were witnessing my utter mental breakdown. The saddest part was that there was no way for my wild tales to be proven until the film opened in town, something that didn’t happen for another month since this was the days long before multiplexes and saturation openings. But in the end I was proven right, and all of my adolescent contemporaries fell under the spell of STAR WARS and “drank the Kool Aid,” so to speak.

And the rest was history.

That’s my story, but please write in with your tale of seeing STAR WARS for the first time, especially if you saw it when it came out. It’s kind of hard to communicate what a kick in the ass that movie gave to the general public at the time, especially when trying to get it across to this current generation who are victims of George Lucas’ — and most of Hollywood’s, for that matter — creative bankruptcy.