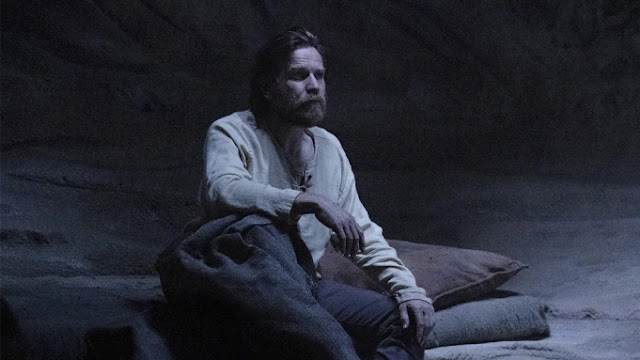 I can practically smell the patchouli.

Disney STAR WARS continues to treat the franchise like a Play-Doh Fun Factory, with OBI-WAN KENOBI being its latest cranked-out product. Kenobi was my favorite character in the original film, and Ewan McGregor did a good job bringing his younger iteration to life in the prequel trilogy, but now Kenobi is back in what amounts to a pronounced case of ROGUE ONE syndrome, basically yet another prequel that tragically shows how creatively bankrupt those holding the reins are.

Stop me if you've heard this one before: Obi-Wan Kenobi, now a hermit in the wastes of Tattooine, is called out of seclusion to rescue a kidnapped Princess Leia (age 10). We already know the guy hermited himself for something like 20 years, until once more called back to action, and by all accounts he kept the lowest of low profiles, with adventure not being a part of his lifestyle at that time. The current story sees agents of the Empire ruthlessly scouring the galaxy in search of disparate Jedi to stamp out once and for all in the wake of Order 66, so Kenobi works as what amounts to a sushi processor on Tattooine.

I watched the first two chapters and it's all well-realized, but once more it is nothing but a feast of 'Memberberries with little else to offer other than immersive production values. I've said it before and I'll say it again: the STAR WARS galaxy is vast, the very definition of "far-flung," but we keep getting the same locations and situations and, frankly, I am quite sick of it. Though not bad by any means, OBI-WAN KENOBI did not excite me in the least, and when Episode 2 ended, I felt like I watched it for no reason other than to comment on it. It was just kind of...there. Honestly, I could bail now and feel that my life would be in no way diminished by not continuing. I may wait and allow a bit more to accrue before I continue, but I could also easily just walk away. I mean, what's Kenobi, a space wizard, if he has to keep his lightsaber and Force skills hidden? I'll tell you what. A bum.

This is no THE MANDALORIAN. Your mileage, however, may vary.