My Brooklyn neighborhood is a study in cultural and socio-economic diversity, with poverty and wealth literally staring each other in the face on a daily basis. The building next to mine is a welfare fortress, a twenty-four-hour party since apparently none of the residents work, and the kids and teens who live there have a minimal amount of parental supervision or involvement in their lives. The one heartwarming exception to this is the recently-out-of-prison dad who graphically lectured his son on the dangers of getting ass-fucked in the lockdown shower by horny gang members; this Hallmark moment was answered by his nine-year-old son who said "When I go to jail ain't nobody fuckin' me up the ass!" The father smiled proudly at his little man and the two of them celebrated their tender father/son bonding with deep drags on a fat joint. I marvelled at this and sorrowfully noted that the father in no way offered advice on staying out of jail and apparently accepted the inevitability of his offspring following in his footsteps.

Most of the boys next door hang out noisily on the stoop and hawk pitiful ditch-weed that I wouldn't have smoked even during the worst of "droughts" in my long-ago college stoner days, and the girls are all — and I do mean all — mothers of infants at ages below sixteen, each bearing the stretch marks and post-baby flab of women at least a decade or more older than they are; that lamentable spectacle is punctuated by the fact that they wear outfits that reveal way too much skin — and consequently doughy fat — and they believe that they look sexy. Sorry, girls, but you look like Hispanic variants of ignorant trailer trash like my relatives in rural Alabama.

This kind of slack behaviour is also quite evident among the progeny of the moneyed white residents up the street, kids who are every bit as uncouth, hip-hop affecting, foul-mouthed and knocked-up as their more "ghetto" counterparts. The difference is that the white kids are under the supervision of their parents more often than not, but what kind of supervision are they getting?

A few weeks ago I was walking down the street and noticed a local white mother and her fourteen-year-old daughter laughing amongst themselves and enjoying the sunny day. I smiled at the obvious camaraderie between the two and was charmed by their sweet demeanor... until I saw the t-shirt that the daughter wore. The shirt was a good three sizes too small and was obviously meant to showcase her gravity-defying, erect-nippled, fresh-out-of-the-box breasts, but that wasn't the problem. To my horror, the girl's shirt was emblazoned with the slogan "I have the pussy, so I make the rules." 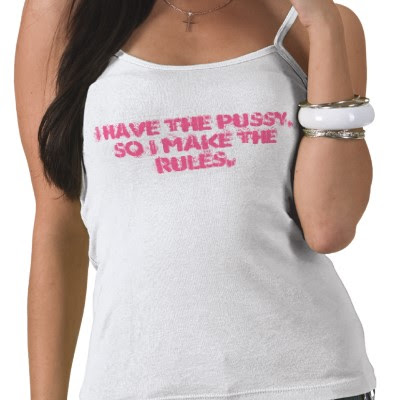 Not a Photoshop gag. Buy one for your tweener daughter today!
Now, I am about as far from being a prude as a person can get, but there is no way in Hell that I would allow my jailbait daughter out of the house — or in the house for that matter — in that shirt. Sure, the sentiment is amusing, and in the case of most women I know absolutely true, but the girl wearing it was just a kid! What does that say about her mother? Does she think it's an appropriate statement to be made by an adolescent? I'd love to hear other opinions on this one...
Posted by Bunche (pop culture ronin) at Wednesday, October 06, 2004

hilarious tale of the ghetto. as for the stupid mom and her daughter's t-shirt , well, what else could be expected. also predictably, she will be the same shit for brains with her kids.

I teach high school math and assure you there are brilliant kids out there (who move away and make things of themselves.) The t-shirt wearing batch however revel in the fact that they are ignorant, and aspire to work at Hooters. I kid you not, I have a teenage girl in a class that told me she wants nothing more than to become a waitress at Hooters. Wow, how can I even begin to battle that kind of ignorance.

Sad to say, but I'm not too surprized... somehow one group gets the stereotype, though both act equally trashy. The parents want to be "cool" rather than disciplinarians. So, figuring their daughter will sneak into sexy clothes anyway, they just allow it. I went to a wealthy suburban high-school in CT (one of few black/mixed girls there) and the parents spoiled the kids ass-rotten. Let them do ANYTHING. Yet the same parents are later shocked to find their kids have no sense of values. Hell, five to one the daughter was borrowing her mom's shirt.