IS "THE INCREDIBLES" THE BEST SUPER-HERO MOVIE EVER MADE? 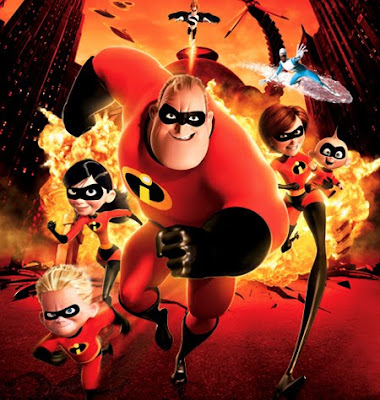 Never one to shy away from unequivocally stating my opinion, I would like to officially nominate Pixar’s THE INCREDIBLES as the best super-hero movie ever made. Period.

Admittedly, such a statement is debatable, not only because of the number of films in this particular genre — a rather narrow field in which to find works containing any sort of excellence whatsoever — but also because of the difficulty of pinning down exactly what constitutes a super-hero flick. My own personal definition of what comprises a super-hero movie boils down to two criteria:
That’s rather simplistic, but it works for me. By allowing any “super” stuff to count, I open the category to include stories that have nothing to do with comic books, such as certain martial arts movies that go beyond the people-on-wires flying about that is pretty common to the genre (for example classics such as FIVE DEADLY VENOMS, THE STORY OF RICKY and MASTER OF THE FLYING GUILLOTINE), tales of costumed adventurers and thieves (SUPERARGO AND THE FACELESS GIANTS, DANGER: DIABOLIK!, THE HEROIC TRIO) and intriguing explorations of the overall nature of the super-hero (UNBREAKABLE). By my definition THE INCREDIBLES falls squarely into the second category, since despite obvious tips of the hat to certain archetypes and specific characters, it is created from the ground up and not from any established source.

“So what makes THE INCREDIBLES so fucking good?” I hear you sneer. Let me break it down for ya:

AN ENGAGING STORY WITH CHARACTERS THAT YOU GIVE A SHIT ABOUT
All good movies begin with a solid story, a vital ingredient overlooked by the majority of super-hero movies. The Spider-Man movies and the first Superman films were winners because they took the time to let you get to know their heroes and that’s very important for engendering viewer interest. THE INCREDIBLES establishes a world in which super-heroes exist — or rather existed prior to being censured and banned by the government — and we are expected to take that as a given. The characters have the quality that made so much of Marvel’s work from 1961 on so much fun, namely they are written as normal, feeling individuals who just happen to have cool powers and a relatable quotient of everyday dysfunction. In the case of the Parr family, we are presented with a married couple of “supers” who have been together for fifteen years, had three kids (two of whom engage in the usual sibling warfare only with super-human skills thrown into the mix), cope with the inevitable signs of aging such as increasing girth, hair loss and sagging asses, life in a cookie-cutter suburban home, and, saddest of all, having no choice but to hide their fantastic abilities or else face prosecution. You really feel for Bob “Mr. Incredible” Parr as you witness the crushing mundanity of his job at an insurance firm and share in his frustration and impotence when confronted with his pint-sized asshole of a boss and company policies that care nothing for the people that they purport to help; gone are his days of fighting the good fight and making a difference in a world which needs him and those of his crime-fighting ilk, and now his only excitement is had by covertly listening to police radio bulletins with fellow unwilling super-retiree Lucius (aka Frozone) in hope that they can secretly once again aid society at large. He deeply loves his wife Helen (aka Elastigirl), who has been relegated to the role of stay-at-home mother to painfully shy tweener daughter Violet (whose power of invisibility is a physical complement to her insecurities), rambunctious super-speedster Dashiel ((Dash for short), and infant Jack-Jack. Bob and Helen argue about Bob’s projecting his need for recognition of superness onto Dash’s desire to compete in sports, an endeavor that would be unfair for obvious reasons, and it is plain that this is an argument that they have had many times before. Helen also fears that her husband is involved in an extramarital affair and her suspicions are only bolstered by a mounting batch of evidence that leads her down a path of sadness and eventual anger at the assumed betrayal. Super-powers or not, we know these people from our own experiences and we cannot help but be drawn in when they are all forced into action by the machinations of Syndrome, once a brilliant boy who idolized Mr. Incredible and whose irritating fanboy attentions lead to a long-ago snubbing by his hero, a snubbing that festered into sociopathic madness, a spree of mass murder against “supers” and insecurity-fueled megalomania.

THRILLS UP THE YING-YANG
One of the major failures of many super-hero flicks is that fact they simply are not exciting in even the most minute of ways. Name me even one truly thrilling moment in any of the Batman movies…You can’t, can you? Well, rest assured that THE INCREDIBLES kicks the audience in the ass once things start happening, and the plot leading up to the action is compelling in the first place so the cool stuff is all gravy! We have displays of super-powers from the second the films starts, but the truly adrenaline-pumping bits start with Elastigirl’s plane journey to Syndrome’s James-Bond-villainesque island lair in search of her husband, her two eldest kids having stowed away on board, and the missile attack that drops mom and the kids squarely into a situation that means life or death for the entire family. Upon reaching the island, Elastigirl informs her children in no uncertain terms that the bad guys they are about to face will not hesitate to kill them and they should take the spot that they are in as seriously as a heart attack; if threatened they are to look after each other and use their super-powers without hesitation. So with parental approval the kids can finally cut loose with what they can do, and that’s a damned good thing too, since their mother was absolutely right and these bad guys are out to exterminate them with extreme prejudice. We can actually feel Dash’s joy and exhilaration at being able to run at fantastic speeds, even as he’s being chased by heavily armed hovering pursuit vehicles; it’s what he was born to do, and it’s glorious to see him revel in his own specialness. Violet also shines when she discovers strengths and levels of her own powers that she didn’t even know she possessed, and we are right there with her, sharing in her triumph. Mr. Incredible and Elastigirl kick much ass as well, and when the action swiftly migrates back to the big city we are treated to a downright spectacular display of teamwork, sheer bravery and just plain damned cool visuals of super-people doing super things. And Frozone’s style makes the dyed-in-the-wool comics fan scream, “Eat your heart out, Bobby Drake!” NOTE: for the non-geeks reading this, Bobby Drake is better known as Iceman, one of the original five X-Men.

VISUALS TO DELIGHT THE EYE
Comics have always been a buttload of fun for many reasons, but the colorful images are one of the linchpins of the medium. No super-hero movie before now has really gotten across that particular aspect of the genre’s appeal, and the digital wizards at Pixar have pulled out all of the stops, unleashing a palette of vibrant colors, flawlessly animated movement, appealing character designs and intelligently-thought-out depictions of super-powers. When the Fantastic Four movie comes out I guarantee you that Reed Richards’ stretching powers will be little more than a pitiful, wet fart when compared to the work done in THE INCREDIBLES on Elastigirl; the animators really put a lot of thought into how her powers would look, and if she were a professional stretching hero like she is, she’d have her malleable skills down to an art, with a quick-witted reaction time to go with it, and Elastigirl has that in spades.

STELLAR VOICE ACTING CAST
Craig T. Nelson, Holly Hunter, Samuel L. Jackson, Jason Lee…’Nuff said, although special mention should be made of writer/director Brad (THE IRON GIANT) Bird’s turn as the tiny cross between James Bond’s Q and legendary Hollywood wardrobe designer Edith Head, Edna Mode; Edna steals every scene she’s in and is a comedic masterpiece. If there were an Oscar category for best supporting animated actress, Edna would be going home with a little gold nekkid guy in March.

No bullshit, folks, THE INCREDIBLES could only be better if it handed you a six-pack, a righteous blunt of Maui Wowie, a Beef Wellington prepared by Wolfgang Puck, and a night of bedframe-destroying, fluids-a-flyin' fucking with the fantasy celebrity of your choice, complete with the willingly-agreed-upon option to get it on videotape to prove that it actually happened. Do yourself the favor and make sure that you see it on the big screen so you can be awash in the spectacle as it is truly meant to be seen. There is movie magic aplenty to be had in THE INCREDIBLES and in these days of soulless films-by-committee, that’s a precious commodity indeed.

And that’s my argument for THE INCREDIBLES, so please write in with your own nominee for the best super-hero movie ever made, along with a decent argument to prove your point. And I don’t give a damn what any of you say: all of the live-action Batman movies sucked ass. They are visually murky, boring, void of anything resembling action and scripted by talent-free hacks (Akiva Goldsman, anyone?). The only good Bat-flick is the animated MASK OF THE PHANTASM and I thank the gods of cinema that I got to see that one on the big screen during the fifteen minutes when it was in theatrical release! So there!
Posted by Bunche (pop culture ronin) at Friday, November 19, 2004

It is my sincere belief that this is the Fantastic Four movie we were promised and have sadly yet to receive.

Darth, I could not agree with you more.