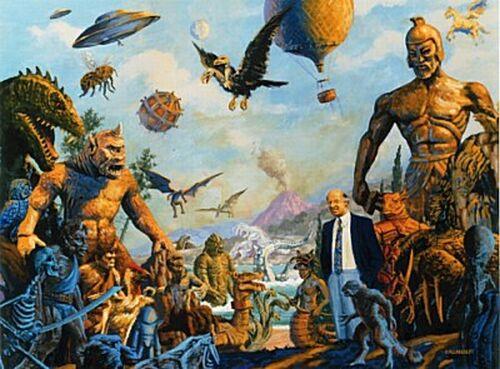 I cannot believe that I neglected to post until now, but better late than never...

When it comes to entertainment that absolutely turns me on there are three creators who I revere with a love most people reserve for their chosen deities: Jack Kirby — key architect of what would become the Marvel Universe, Frank Zappa — a brilliant, irreverent trickster-god-as-musical-genius, and Ray Harryhausen. Ray Mother-Fuckin’ Harryhausen.

In case you just stepped out of the mothership, Ray Harryhausen is the man whose obsessive stop-motion animation skills breathed life into such unforgettable cinematic creations as the terrifying Medusa in CLASH OF THE TITANS (1981), the stunning cyclops and fire-breathing dragon of THE 7th VOYAGE OF SINBAD (1957), and the show-stopping gang of warrior skeletons in the wonders-laden JASON AND THE ARGONAUTS (1963). The man is the very model of patience and professionalism but, most important for the world, he is the wise and loving grandpa who took our youthful minds on journeys into all manner of fantastic worlds filled with adventure, heroism and romance. The effects that he crafted were extremely personal, each one a glimpse into one man’s unique imaginative vision, a vision that in turn fired the imaginations of generations of children, many of whom would follow in his footsteps to create the next level of visualization of the impossible. His work has touched me in a very deep way and I truly feel for the audiences today who, having been weaned on a diet of CGI-realized spectacle, find the painstaking work of Harryhausen and his patient brethren…quaint. Well, fuck those people in the ear! I love the guy’s work — even in sub-par offerings like THE THREE WORLDS OF GULLIVER (1960) and SINBAD AND THE EYE OF THE TIGER (1977).

On May 6th, while most of the country was glued to their in-house cathode-ray teat watching the final episode of the interminable monument to mediocrity that was FRIENDS, at Lincoln Center’s Walter Reade theater there unspooled a cornucopia of fantasy and sheer movie magic that drew a sold out crowd of the faithful. I don’t know where they found them, but the Walter Reade film society unearthed cherry archival prints of both JASON AND THE ARGONAUTS and THE 7th VOYAGE OF SINBAD and the icing on this film-geek’s cake was the presence of Ray Harryhausen himself — who sat through the 6:15 show of JASON — who kindly did a Q & A session with the fans and also sat down for a signing of his autobiography, "Ray Harryhausen: An Animated Life" (co-written with Tony Dalton and published by Billboard books). The Q & A session was highlighted by the presence of an original model of one of the aforementioned sword fighting skeletons, and a bit later on the actress who played the princess in SEVENTH VOYAGE, namely Kathryn Crosby (formerly billed as Kathryn Grant in her pre-Der Bingle days), showed up to greet the fans. This event was the second time that I met Harryhausen; I met him some five years ago in Atlanta at a convention, spent about forty-five minutes talking with him one-on-one since the comics geeks in attendance didn't give a shit about some old fossil and did not turn up at his signing table, and I also tried to get him a book deal with a guy I know at Del Rey books, but that went nowhere. I'm assuming that the current book is the result of him finally getting a publisher interested in what is a no-brainer of a book that should have been published from the get-go.

UBER-GEEK SIDE NOTE: having secured my autographed copy of the autobiography I returned to my seat and waited for the second feature to start. I promptly saw Miss Crosby leave the auditorium in search of the concession stand and thought to myself “Am I that much of a fanboy?…Hell yeah!” and ran off in pursuit of the princess’ autograph. I humbly asked her to sign my book and she was flattered that anyone even wanted her autograph. She was utterly nice, gracious to the nth degree and a real old school lady. I will get rid of that book only under pain of death.

As for the book, if you are a Harryhausen fan this tome is tantamount to being handed the Holy Grail. The hefty 303-page hardcover mamma-jamma is loaded with exhaustive photos, design sketches, movie posters and everything a fan would want to read, all told in the words of the master himself. I have already read the book cover-to-cover four times and was enthralled by each page. Folks, if you accept no other recommendation from me, run to your local bookstore or comic shop and plunk down the $50 bucks for this gorgeous edition. If you give even the slightest bit of a damn about this stuff, it isn’t even like spending money.
Posted by Bunche (pop culture ronin) at Friday, November 19, 2004