SIDE DISH IN EXCELSIS: THE MACARONI AND CHEESE OF THE GODS 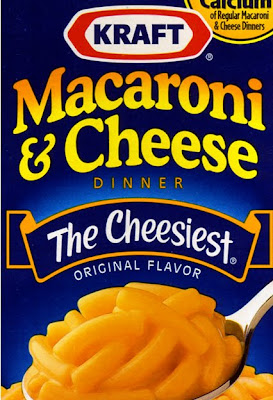 Prepare to kiss this shit goodbye!
A few years ago, yet another person moved into the studio apartment across the hall from me; not much of a surprise there since this building has a staggering turnover rate, leaving myself and two other people as the only residents who have lived here for more than a few years. I didn’t see the new neighbor move in but one evening I heard the all-too-familiar strains of Devo’s “Snowball” coming through the paper-thin wall and had to introduce myself.

I knocked on the door and was greeted by a blonde twenty-something guy named Tim Holden. I think he expected me to request that he turn the music down, but I put his mind at ease by telling him of my rabid Devo-tion and invited him to drop in any time. During the time that he lived here Tim and I became good friends, sharing much music and many recipes, including his secrets for the perfect — and I DO mean perfect — macaroni and cheese.

At this point I would like to make a statement of priorities. My favorite things in the whole world are pussy, good food and rock ‘n’ roll. As rock ‘n’ roll is utterly irrelevant to this post, we’ll just leave that one out and return to the other two favorites.

There are very few things that I enjoy eating more than pussy, and this macaroni and cheese is one of them.

When I lived on Manhattan’s Upper West Side there was a rather chi-chi delicatessen a couple of blocks away from my apartment whose prices were what one would expect for the area and I would have totally ignored it if not for rumors of them making an exemplary macaroni and cheese. Now it’s a well-known fact that something as seemingly simple as macaroni and cheese can vary widely in terms of tastes ranging from mouthful-of-paste to the final word in sharp, cheesy goodness, so I purchased a half-pound of the deli’s offering with no expectations whatsoever. Let me just say that the flavor that I experienced that day was a life-changer, and whenever I find myself in that neighborhood I always buy a pound of the stuff, but I’m seldom up there so I was totally screwed if I wanted some truly holy m & c. That is until Tim Holden hooked me up with the following recipe. If you are looking to avoid carbs and cholesterol, stop reading now and go eat a fistful of wheat germ; this one’s for us hedonists!

NOTE: these are the basics for simple mac and cheese, but you can tweak it with shredded ham of crumbled bacon.

Boil your pasta of choice; I recommend either standard elbow noodles or hearty flat noodles. Drain and set to the side.

Take the cheese and if it isn’t already shredded, shred it and put it into a saucepot. Add two cans of evaporated milk and four eggs; slowly cook over low heat, stirring until the cheese has melted and the whole thing is velvety creamy. Next add powdered mustard to taste, but the mixture should have a certain tang to it. Then add the butter and blend it all together until smooth. Add to the drained pasta and mix thoroughly. Put the gloppy sludge into a baking dish and bake in an oven (no, duh!) on broil for a couple of minutes until the top browns. After that, let it sit at room temperature for five minutes and then stuff your fat face.

Spring this one on your family at Thanksgiving and be prepared to join the annals of holiday legends. Just remember to play to your audience and use the “better to eat than pussy” comment at your discretion.
Posted by Bunche (pop culture ronin) at Sunday, November 07, 2004

I never ate pussy, but I did just make the mac and cheese. I'd say it's the best I've ever had. It's becasue the noodles don't get mushy. (How's that innuendo?)