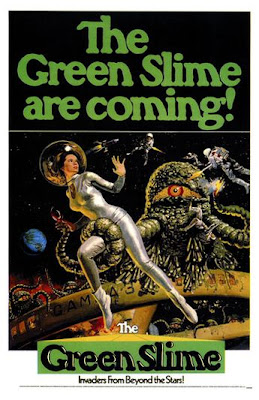 For kids who grew up in the Tri-State area and were blessed with THE 4:30 MOVIE, THE GREEN SLIME was one of the most beloved classics when the show ran Monster Week of Science-Fiction Week (it easily fit into both and thus saw double-duty). I hadn’t seen it since the late-1970’s but I know plenty of folks my age who still talk about it with great affection, so in the interest of this blog’s frequent rustling up of old flicks I’ve hankered to sit through it again and review it. That quest was thwarted for years thanks to the film not being available on DVD, a state I find confusing thanks to all manner of far lesser shit being readily obtainable (but then again the classic ISLAND OF LOST SOULS isn’t legally available either, so go figure), but I finally got to see it again thanks to my friend Adrian hooking me up with a VHS copy. (It was pan & scan, but I’ll take what I can get.) 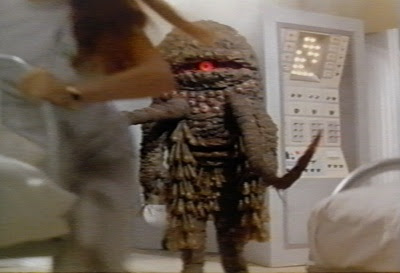 One of the title critters.
This dire situation plays out as viewers bear witness to an awkward love triangle between the station’s commanding officer, Vince Elliot (Richard Jaekel), his hot redheaded fiancée, (THUNDERBALL’s pouty and oh-so-mouthwateringly-Italian Luciana Paluzzi playing — now get this — “Lisa Benson”) and higher-ranking Commander Jack Rankin (Robert Horton); back in the days, Rankin and Elliot were best friends and Lisa Benson (*snicker*) was in love with Rankin, but she dumped him in favor of Elliot once she twigged to the fact that Rankin was a major control-freak and towering asshole, an aspect immediately noticeable to anyone who spends even three minutes in his noxious presence. 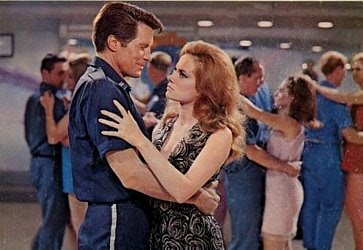 The relationship subplot really doesn’t add anything to the story other than to continuously provide examples of what a fucking douche Rankin is and point out Elliot’s questionable qualifications for commanding anything, let alone a space station, thanks to him being “too nice” and having problems with those who outrank him (although, to be fair, I can’t think of anyone who wouldn’t want to knock Rankin’s teeth out of his smug, smirking face). I suppose the subplot was left in the international cut of the film in order to give the grownups who took their kids to the matinee something by way of “adult” content, but from what I hear the Japanese cut is around thirteen minutes shorter and totally eliminates the love triangle stuff, thus allowing full attention to focus on what put asses in seats in the first place: creepy, nasty wigglies with flailing tentacles and the laser rifle-equipped spacemen who fight them with extreme prejudice. That’s the version I would love to have and hopefully when (if) THE GREEN SLIME ever finds release on DVD, both versions will be included and presented in widescreen.

But, soap opera histrionics notwithstanding, THE GREEN SLIME is good fun and will most likely be enjoyed by your kids if you expose them to it. And no discussion of this film would be complete without mention of its hilariously inappropriate and ultra-psychedelic theme song, a tune that fans of the film will break into at the drop of a hat. I mean, how many “acid rock” tunes can you name that combine all the most clichéd elements of that musical genre with vocals more suited to a lame Las Vegas number and mention of “Greeeeeeen Sliiiiiiiime?” Sheer insane brilliance, plus you get that hot-assed Luciana Paluzzi — unfortunately it’s a kid’s movie so no low-cut gowns, leather motorcycle gear or foxy swimsuits — so it’s a cheesy win/win.
Posted by Bunche (pop culture ronin) at Tuesday, March 31, 2009