"IT'S OVER, JOHNNY"-YER BUNCHE OFFICIALLY KISSES OFF THE FANTASTIC FOUR 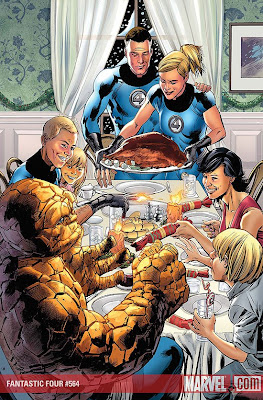 "Dear Readers,
You have our word that nothing lame happens inside. Yours sincerely, Mark and Bryan."
-cover blurb on FANTASTIC FOUR #564

As a result of reading the latest turgid installment from Mark Millar and Bryan Hitch, it is with the greatest sadness that I herewith officially give up on the Fantastic Four comic series after being a diehard fan since the age of nine. Let's face it: the FF have really only had a handful of runs that warrant their considerable fan base — Lee & Kirby, Perez, Byrne — and the current "hot" creative team was put in place presumably to inject new life into a franchise that's been treading water since John Byrne left, but in my opinion they have contributed absolutely nothing to the Fantastic Four's once-awesome legacy. Yeah, Hitch's art is quite good, but it's just as boring and uneventful as Millar's agonizingly dull scripts and I for one can no longer waste either my reading time or money on this outright bullshit.

The latest issue put the final nail in the coffin of my interest by not only being a Christmas issue four months too late, but for having the rather telling gall to have a promise of "nothing lame" being found between its covers and then giving us an entire issue of talking heads as the FF goes on a Christmas holiday in Scotland in which fuck-all happens other than little Valeria being set up as what appears to be a pagan sacrifice. The whole issue comes off as a case of "been there, done that" to anyone who's seen THE WICKER MAN (1973) and I don't care to venture any further, not even just to see how it turns out.

It breaks my heart to do it but this was a breakup a long time in the coming, and while I will cherish my memories of the once great FF, I think it's best to end things now before they get even worse. Goodbye, Reed, Sue, Johnny and most of all Ben. You were once the best of the best and that is how I will remember you. Requiescat en pace.
Posted by Bunche (pop culture ronin) at Wednesday, March 11, 2009

Lord, I couldn't agree more, and I was the biggest FF fan on the planet. Isn't Hitch supposedly drawing these pages on gigantic art boards? Why bother when it comes out looking so dull?

My only vote is for a fully animated Thing, any other votes for a cast reset?

At the risk of veering off topic, and speaking of what I don't know from close-hand experience (since my funds don't allow for a regular comic habit these recent years), but does Marvel know WTF they are doing anymore?

The whole registration act thing had some promise for shaking things up and making the Marvel universe overall more interesting, and then we get World War Hulk and a Skrull invasion and now Dark Reign. I think we coulda skipped World War Hulk and had a much more coherent and logical path toward Dark Reign.

But, in the end, will things really change or be shook up, or will this be another registration act saga, where the promise is killed as soon as the big crossover stuff is over (Hey, we put spidey on an interesting path, now let's erase everything with a wave of Mephisto's hand!)

Dr. Strange gets dethroned and now we'll probably get some fucked up stupid storyline where Dr. Doom or this "Hood" character get the title for no logical reason.

Tony Stark loses his company for the umpteenth fucking time, and will be on the run in his one suit of armor until we conveniently let him recover his corporate role.

I don't understand it. The FF should be the easiest Marvel title to do well. High adventure, travel through outer space and strange dimensions, the nuclear-family dynamic, some banter between Ben and Johnny, an epic battle with Dr. Doom every couple of years...how hard can it be?